Not a happy homecoming for resident displaced by hurri-crane

'There was mouse poop everywhere and the smell was terrible,' said Rebecca Carole
Oct 16, 2019 11:57 AM By: Meghan Groff 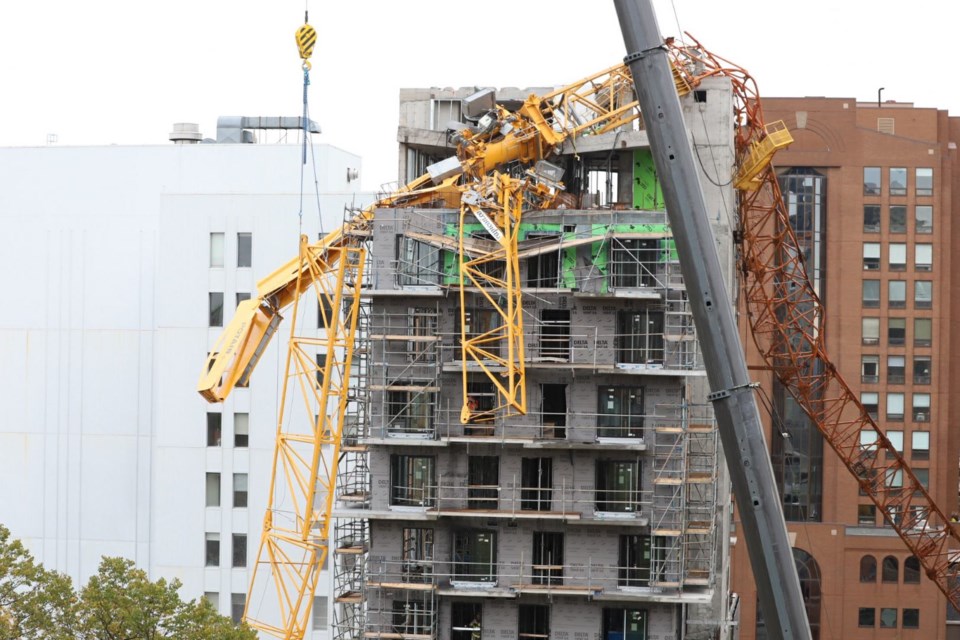 After being displaced for over a month, some of the people evacuated due to the potential danger of a collapsed construction crane can return to their residences.

Rebecca Carole lives above the Eastlink building at Spring Garden and South Park Street and is now allowed to access her apartment, but said it wasn't the happy homecoming she had hoped for.

"There was mouse poop everywhere and the smell was terrible," she said. "It was not a pretty sight."

Carole and her boyfriend won't be able to sleep in their own bed until cleaners come to clear out the mess.

The crane -- owned and operated by Lead Structural Formworks Ltd. --  collapsed onto a building under construction on Sept. 7 as Dorian brought hurricane-force winds to Halifax Regional Municipality.

Two days later, the pair got a knock on the door and were told they had 20 minutes to pack up and leave their home.

They've been compensated for their accommodations, but Carole told NEWS 95.7's The Rick Howe Show there were many other out-of-pocket expenses that, so far, haven't been covered.

"A new winter jacket I had to buy, gear for my partner to rent for his work, I had to get medications I otherwise would have had at home, food waste, everything like that," she said. "It's a bit over $1,000, so it's a pretty big chunk of money ... and whatever the cleaning is going to cost."

Some residents and businesses remain displaced, including the law firm Walker, Dunlop, whose office is right next door to the building that the crane crashed into.

"We expected all along we would be among the last, if not the last, to get the okay to go back in," explained lawyer Eugene Tan. "Because of course it's not just the crane, but I'm not sure exactly what the status of the building next to us is."

"I haven't heard anything about what work might be necessary on that and if there's anything unsteady in that building. It may not be an issue but I'm not sure."

Some court cases have had to be delayed because the firm can't access files necessary to properly represent their clients.

"It's still a very paper-intense business where documents are exchanged ... on top of that, we didn't have access to our server because of course our computer server is in the building," Tan said. "The power was cut and it hasn't been restored since Hurricane Dorian."

The firm has had to rent out a temporary space and buy new computers along with other office supplies to keep their operation running.

"Out-of-pocket [expenses] alone, I can tell you is probably in excess of $20,000," he said. "That's just rent, computers, other things like paper, parking spaces and all those things. I can't even begin to assess what our loss in income is."

Tan said the firm is waiting for the Department of Labour to determine why the crane collapsed, then they'll likely take legal action.

"We can't represent ourselves in something like this, we have to get somebody else to represent us, so we're in the process of interviewing them," he said.

"We're sitting back, we're going to let the province tell us what happened and then we'll assess who we need to speak to about getting some compensation."