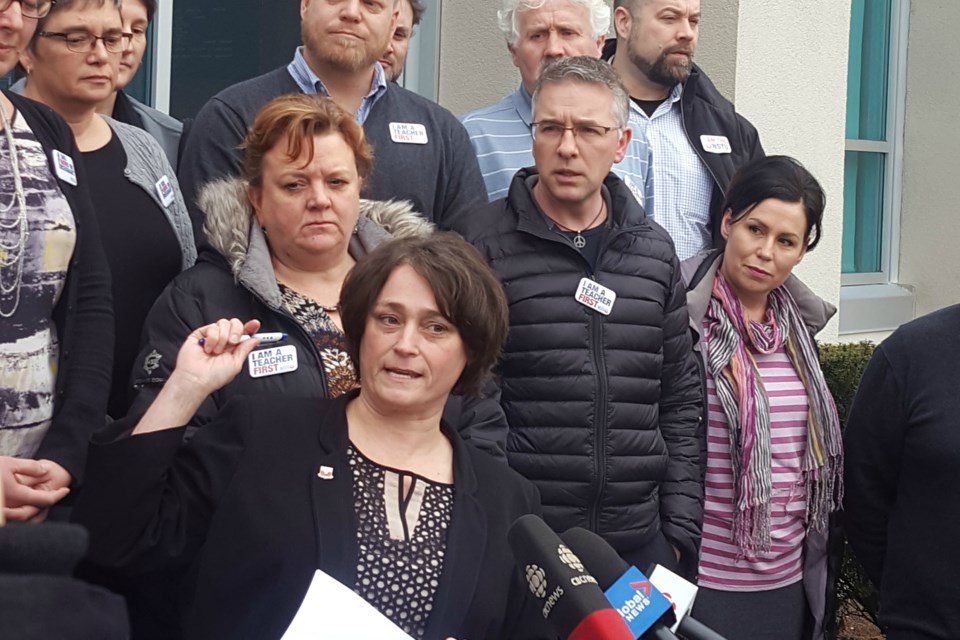 HALIFAX — Nova Scotia's public school teachers have given their union a strong mandate to authorize an "illegal job action" over pending education reforms, the head of the province's teachers union said Wednesday.

Liette Doucet said 93 per cent of the union's membership participated in a vote Tuesday, and 82.5 per cent voted in favour of authorizing an illegal strike or some other job action.

No job action is imminent, however, she said.

"The teachers of Nova Scotia sent a very powerful message and provided us with a very strong strike mandate," Doucet told reporters gathered outside the union's headquarters in Halifax.

"They are so concerned for their students and the future of education in this province that they are willing to accept hardship in hopes that it will demonstrate to the government that the way forward is through meaningful consultation."

The union called the strike vote last week to protest the province's decision to largely endorse a consultant's report recommending education reforms, including the removal of 1,000 principals, vice-principals and supervisors from the union.

The report by consultant Avis Glaze makes 22 recommendations, including eliminating the province's seven English-language school boards and creating a provincial college of educators to license and regulate the profession.

"Today, instead of announcing when job action will take place, the NSTU is inviting government to work with us," Doucet said. "We are willing to do whatever it takes to protect the future of public education in Nova Scotia."

Churchill said both he and McNeil were interested in having further discussions and he said a letter would be sent to the union to ask for a meeting as soon as possible.

But Churchill noted that in previous discussions with Doucet, the only suggestion that was brought forward was a pause to the reforms.

"That's not acceptable to me at this point because we do need to move forward with reform, our kids can't wait," he said. "But if there are solutions out there that we need to consider, we are very open to considering those."

Churchill was less equivocal when asked whether the government would stick to its plan of tabling legislation shortly after reconvening the legislature on Tuesday.

"I don't know at this point when we are introducing the bill and I do want to have this meeting with the union as soon as possible," he said. "But we haven't changed the plans in terms of legislation coming forward this spring."

The extensive reforms come a year after teachers walked off the job for a day and staged a protest outside the provincial legislature. The Liberal government eventually passed legislation ending a 16-month contract dispute with teachers, which also ended a work-to-rule job action.

Doucet said if the union decides to take some kind of job action this time around, it will give parents enough notice to make alternate arrangements for their children, but she didn't say how much time that would be.

She also wouldn't specify what kind of action the union's executive is contemplating, although she said some options could include a strike, a rotating strike or work-to-rule.

"All I am prepared to say is we are willing to talk to the government ... and right now what we are asking is that they put a halt to what they are doing and that they come back and have those discussions."

Illegal strike activities could lead to specific fines of up to $300 per day for the union and up to $200 per day for a union officer or representative.

However, if an illegal strike activity continues despite a labour board decision ordering employees to return to work, the penalty is up to $10,000 a day for the union and up to $1,000 a day for each teacher or individual.