New panels at Africville Park provide context to the community

The project is a collaborative effort between the Africville Genealogy Society along with the Halifax Regional Municipality and the Africville Museum
May 31, 2021 4:50 PM By: Steve Gow 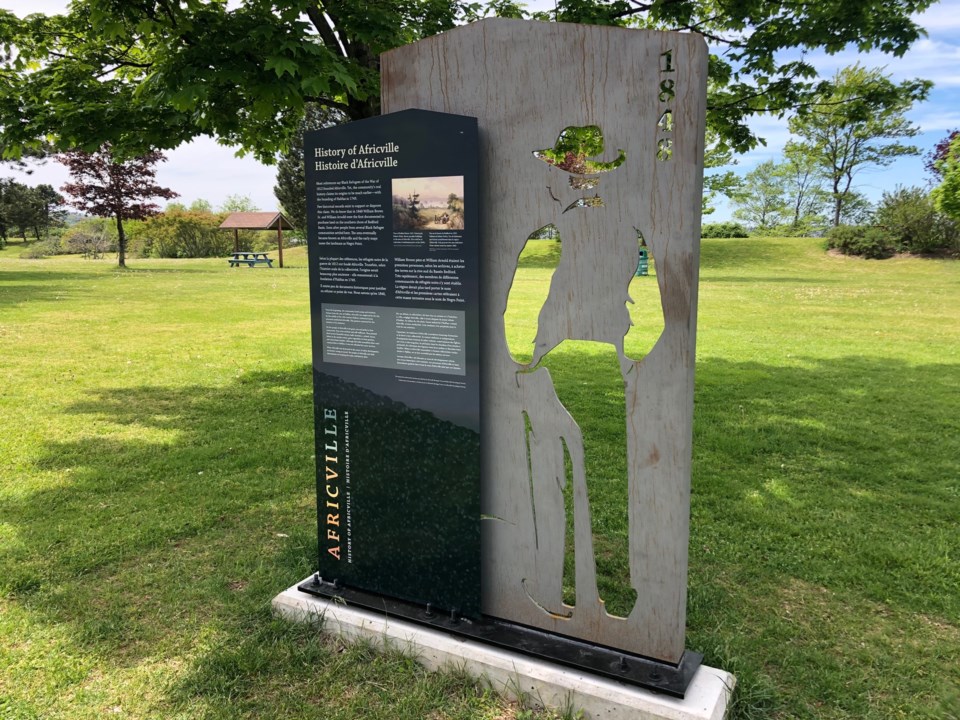 The history of Africville may become a bit more revealing for residents walking around Africville Park from now on.

Last week, several corten steel interpretive panels were installed at the North End recreation area dedicated to the former predominantly African Nova Scotian community that was destroyed in the 1960s.

Designed and installed as part of the Africville Interpretive Project, the interpretive panels aim to capture some of the history, families and the spirit of the historic community.

The project is a collaborative effort between the Africville Genealogy Society along with the Halifax Regional Municipality and the Africville Museum (which is located in Africville Park) and marks the end of a three-year journey.

“COVID really kind of got us stuck,” says Africville Museum executive director Juanita Peters of the long-awaited unveiling.  She adds the process was specifically drawn out with three public consultations to solicit ideas and stories, as well as the elaborate process of eventually designing the panels.

Unfortunately, just as the panels were ready to be crafted, the pandemic prevented the fabricators from proceeding with production.

“We definitely thought that they would be in the ground last summer and that we would do something around the Africville reunion,” says Peters, noting the reunion was also cancelled last year due to COVID-19. “In the midst of all that, great stuff still happened — here it is and they are even better than we imagined.”

Each of the five interpretive panels spread throughout Africville Park shares some of the stories and histories of various former residents and life in the close-knit community and additionally compliments the heritage on display within the nearby Africville Museum.

“I’m really surprised at how many people have said, ‘we’re shocked that there haven’t been historical panels here before.’ They’ve only been up since Wednesday and I must have heard that five times,” says Peters, adding the new installations will help provide valuable context to Africville Park. “A lot of people frequent the park when the museum is closed (so) you want people to have a purposeful journey.”

Located on the northern shore where Halifax Harbour meets the Bedford Basin, Africville was razed in an effort to further develop the area beginning in 1964. However, at the time, Halifax City Council voted to authorize the relocation of residents and dismantle the homes in the area without the community’s consultation.

It wasn’t until 2010 that the people of Africville received a formal apology from the City of Halifax and the community’s Seaview United Baptist Church (which now houses the Africville Museum) was rebuilt in memory of the vibrant community that once thrived in the region.

“I think it’s fitting and very timely as we start talking about the importance of different ethnic areas in Nova Scotia and stories that speak to different experiences,” says Peters of the long-awaited installations at Africville Park. “So it’s never too late and people are already enjoying it and already getting something valuable from it.”

While the interpretive panels are still relatively new to the park, Peters adds there are other initiatives that are currently in the works to further commemorate the history and legacy of Africville in Halifax.

“We are still looking at what are some of the things of interest that tell the story of Africville and (considering) how that will play out,” says Peters of future considerations. She notes particularly of ongoing conversations about an ambitious multi-faceted project that would stretch all the way from Africville to Pier 21 on the Harbourfront.

“It’s really about telling people about their whole history and all the things along the way.”