The stories of 53 boys and girls are featured in 'Amazing Atlantic Canadian Kids: Awesome Stories of Bravery and Adventure'
Nov 13, 2019 1:01 PM By: Meghan Groff 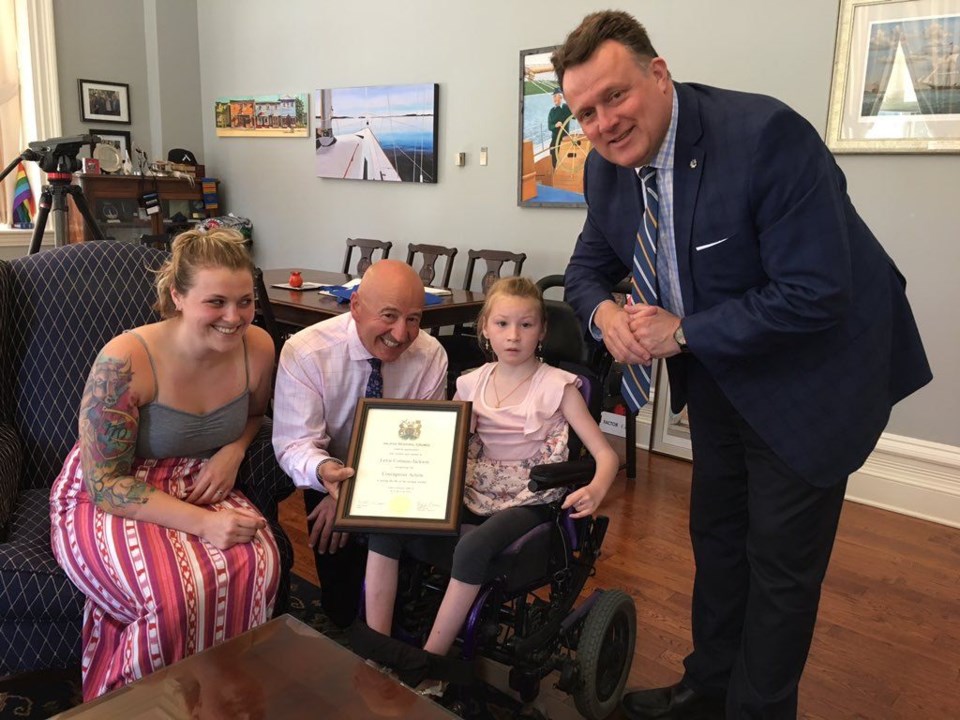 Lexie Comeau-Drisdelle was honoured on July 4, 2018 for saving her brother's life (Photo courtesy of MikeSavageHFX/Twitter)

He's written about the Halifax Explosion, Halifax's connection to the Titanic and told the war stories of many Canadian soldiers.

Now, the amazing accomplishments of Atlantic Canadian kids are the focus of John Boileau's latest book

"I knew some of these stories from my school days and from research for other books and articles, but when I dug deeper and deeper into it, I was totally blown away by some of the things these young kids -- and we're talking kids 10, 13, 15 [years old] -- accomplished. It's just amazing," Boileau told NEWS 95.7's The Rick Howe Show.

The stories of 53 boys and girls are featured in Amazing Atlantic Canadian Kids: Awesome Stories of Bravery and Adventure, including the following:

You've probably seen a sign for Joe Cracker Road while driving out to Duncans Cove or Ketch Harbour.

The 13-year-old was the first to jump in a boat to try and rescue survivors of the wreck of HMS Tribune, which sank in 1797.

"The master of the ship, who's responsible for navigation, told the captain he'd sailed into Halifax Harbour on many occasions, there was no problem, they didn't need a pilot so the captain went below," Boileau said. "Unfortunately, heavy winds came up and drove the ship onto the southern end of McNabs Island."

Boileau said the winds carried them across the bay to Herring Cove. The crew members were able to shout up to locals onshore, who told them conditions were too rough to help.

"The only person to go out was this young boy Joe. He went out there and got some people, rescued them off the boat. And then later, when the storm subsided, some others were rescued," he said.

"So, while adults stood frozen on the shore and didn't get into their boats, this 13-year-old boy got into a rowboat, went out into a storm and rescued people from HMS Tribune."

More than 200 died in the disaster.

A small memorial to Joe still stands at Tribune Head in Herring Cove. Boileau says his real last name is lost to time. Cracker was just a nickname.

"At the time, 'Cracker' was a term for a go-getter, someone who was going to go out and do something."

Twelve-year-old Agnes Foran was in her Merkel Street home with her mother on the morning of Dec. 6, 1917.

The pair were aware that something was burning, and her mother kept her home that morning, fearing the school might be on fire.

At 9:04:35 a.m., as they looked out the window waiting for the fire apparatus to return to the station, the SS Mont-Blanc -- fully-loaded with wartime munitions -- exploded in the part of the Halifax Harbour called 'The Narrows.'

"The force of the explosion blew in the windows and threw her and her mother to the floor. Agnes was covered in blood and her mother had been blinded by the flying glass," Boileau said.

Agnes led her mother out of the house, went back in to find her baby brother, left him with her mother and started walking the streets of the neighbourhood looking for help.

She wasn't able to find anyone, and it wasn't until her father was sent home early from work that they headed to the Victoria General Hospital.

"Agnes was pretty weak from the loss of blood ... the doctor finally got to examine Agnes and she had a huge piece of glass driven into her stomach about as big as my hand, but only a little point of the glass was sticking out through her skin," Boileau explained.

"To sew up her wound it took 29 stitches, so you can imagine how big that piece of glass driven into this 12-year-old's stomach was."

Agnes was just one of the many brave children who helped rescue people in the aftermath of the explosion. Boileau said she fully recovered from her injuries.

May 5, 2018 was Lexie Comeau-Drisdelle's 9th birthday. It was also the day the Dartmouth girl saved her baby brother's life.

As her mother and grandmother prepared for her party, Comeau-Drisdelle watched 18-month-old Leeland open up the sliding door and jump into the family's backyard pool.

Lexie has cerebral palsy and isn't able to walk or talk.

"Lexie knew she had to do something, so the only thing she really could do, she started screaming as loudly as possible," Boileau said.

Once her mother and grandmother came running, the girl pointed to the sliding door.

"They looked outside but couldn't see her little brother," he said. "The grandmother went out on the deck, and right at the edge of the pool she noticed the little boy."

"I think [Mayor] Mike Savage's quote that heroes come in all sizes really applies in this case," added Boileau.

Boileau will be launching his full-colour, illustrated book, Amazing Atlantic Canadian Kids: Awesome Stories of Bravery and Adventure, on Saturday, Nov. 16 at 2 p.m. at the Halifax Public Library.