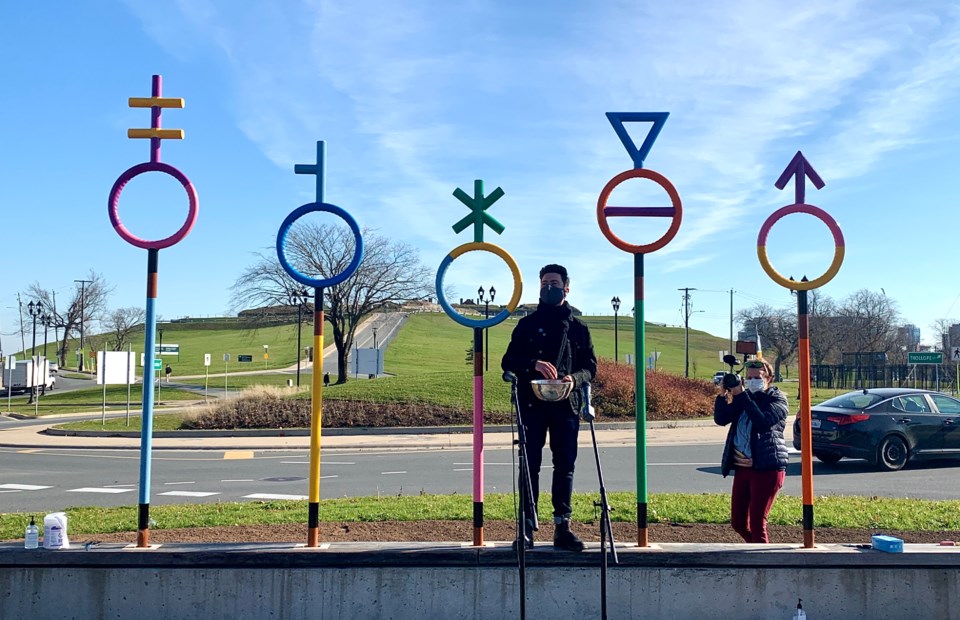 A new 2SLGBTQ2+ art installation was unveiled this afternoon at the Halifax Common.

Titled “Chosen Family,” the art piece was created by non-binary, transgender and queer artist Margot Durling. It stands at the edge of the Halifax Common at the North Park Street and Cogswell Road intersection.

“Seeing yourself reflected in the built environment is a very powerful form of validation and belonging,” Durling, who’s also a designer and musician, said at the unveiling. “Especially when you’ve lived most of your life not seeing yourself reflected in the world. There is a significant difference between ‘all are welcome’ and ‘this space was created with you in mind.’”

a new LGBTQ2+ art installation was unveiled today at the Halifax Common.

“It was important to me and to our community that these reflected both our joy and also our pain,” said Durling. “For that reason, I made them bright and colourful but also upright like flag posts, with heads held high breeding honour and dignity to our community and those we have lost.”

Durling said many people, such as “homophobic trolls,” went online to express confusion and issue with the piece. One common reason was because some didn’t understand its meaning.

But Durling said they purposefully used normal gender symbols, combined them and made them abstract.

“Knowing that these people are online searching gender symbols and learning about that makes me deeply, deeply happy,” they said.

Durling also avoided using the colours of the rainbow. They said those colours have recently been used by corporations as a form of pinkwashing — a way corporations and political entities promote themselves as gay-friendly to downplay their negative behaviour.

“This is life-changing for many who do not see themselves widely represented in power structures throughout their life,” said the Youth Project’s executive director Carmel Farahbakhsh. “Public art is crucial. It is our city’s way to represent various communities in K'jipuktuk that allows for imagination, creativity and magic and play to be alive.

“Chosen family is heart, future, home for so many. I know that youth will see this art and feel a reverberating resonance and feel seen.”

The art installation is a part of the North Park Intersection Redesign — a project that’ll transform the area where the art installation lives. So far, the project has brought two new roundabouts and eight new public art pieces on the Halifax Common. 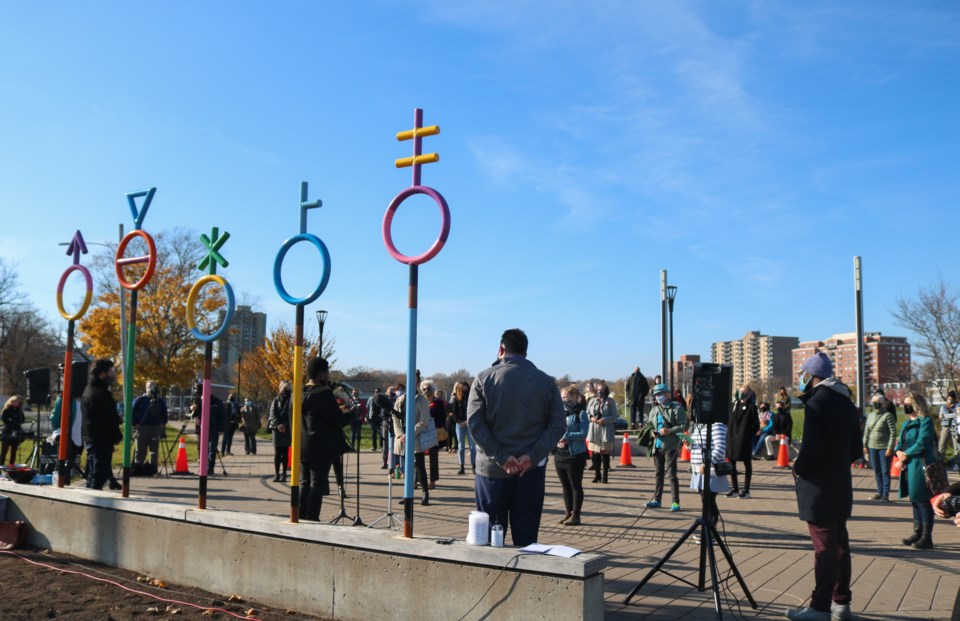 Dozens gathered to watch the unveiling of the art piece at the Halifax Common (Chris Stoodley/HalifaxToday.ca)

“Public art has such an important role to play in creating these strong, welcoming communities where people want to make a home,” Mayor Mike Savage said. “And pieces like this one truly make our city more beautiful and engaging and a better place for everybody to live.”

While Durling created the piece “Chosen Family,” they said they recognize their privilege and wishes to see Black and Indigenous members of the 2SLGBTQ+ have their work and vision represented.

“In order for that to happen, bigger systemic change needs to happen,” Durling said. “Public art needs to be more than an afterthought. We need to invest in community from the root up. Public art can be a powerful act of healing when the work is conceived and executed by and for artists, not for the sake of performative allyship.”