Mayor reflects on HRM's growth in 2019 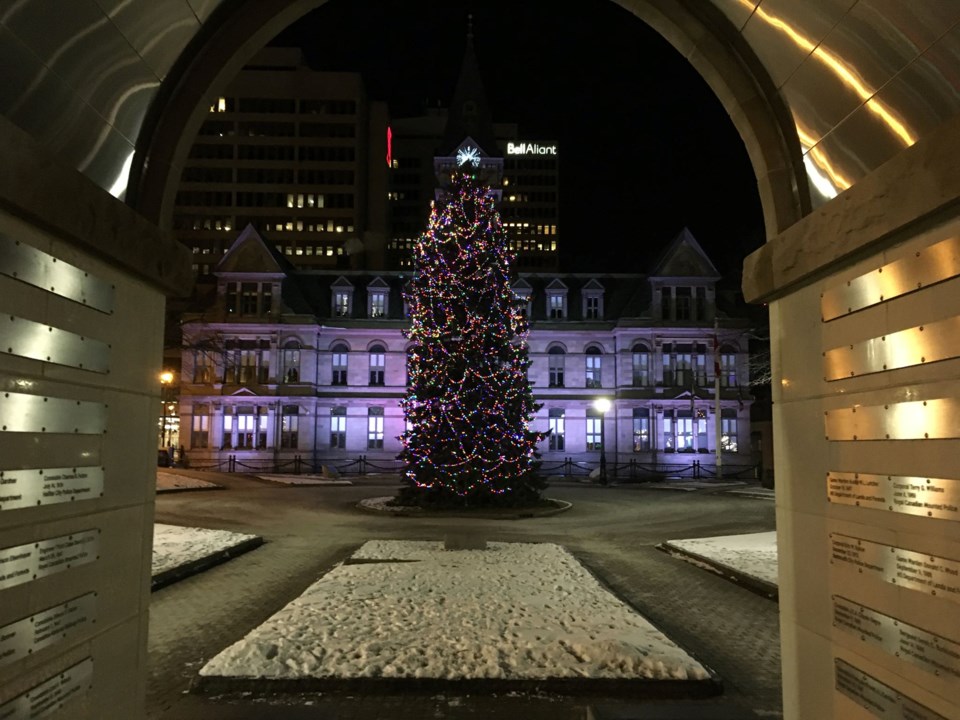 A Christmas tree is lit up outside Halifax City Hall in December 2019. (Victoria Walton/HalifaxToday)

Mayor Mike Savage is wrapping up the 2019 holiday season like most of us are — by spending time with loved ones.

"I think like most people it revolves around family and being together with the people that we love and that's sort of wrapped up in a lot of different traditions," he told NEWS 95.7's The Rick Howe Show on Christmas Eve.

The Mayor says he'll be visiting his two sisters over the holidays, participating in municipal activities like lighting the Menorah in Grand Parade, and of course eating lots of food.

"One of the things that always meant Christmas to us in our house was my mother's trifle for dessert, and we thought when she passed away that we'd never have that again," he says. "But my sister Bridget does an amazing job on that, I expect she'll have some tonight."

Although Mayor Savage is Christian, he says that religion isn't the only reason for the season.

"You get together with people that you really love and it just makes you remember the things that matter the most," he says.

Over the past year, Savage says he's seen Halifax come together as a community in celebration.

"It's been a great year. The Wanderers had just a phenomenal impact on this city in the summer, and we have the Mooseheads who hosted the Memorial Cup," he says.

The Wanderers have an especially devoted fan-base, and Savage says they converted people into becoming sports fans.

"I don't even know if most people know what the standings are in the Canadian Premier League, they just know that it's an exciting atmosphere to march up and to cheer the Wanderers on," he says.

The long-time sports fan says over the past 12 months, Halifax has also seen new sports teams pop up.

"I love what the Thunderbirds have done, I've certainly loved the First Nations influence that Curt Styres brings to the team," says Savage.

And longer-term sports teams have continued to add to their fan base, including local hockey players who are at the World Juniors this week.

"I'm certainly hopeful, but they've got a tough go right off the bat because they finished poorly last year," Savage says. "I'm disappointed that Bo Groulx got cut, was the last cut on Team Canada but we still have Raphael Lavoie and Jared McIsaac on the team."

In the coming year, the Mayor hopes the city will continue to support sports as both the North American Indigenous Games and the World Women's Hockey Championship come to the province in 2020.

"There's a lot of stuff going on with sports in this city, and I think it reflects the general vibrancy of the city," he adds.

As much as Haligonians loves celebrating, Savage has also been proud of our support during times of grief, like the tragic Barho family house fire in January 2019.

"The community came together regardless of religion to support that family," he says.

As Savage wraps up his mayoral duties for this year he hopes Haligonians set aside their differences to find the true meaning of the holidays.

"We're living in an era in the world where the extremes become more normalized. Whether it's President Trump or Vladimir Putin or whether it's people in our own country who think the worst of each other," he says. "At the end of the day I think people see through it. I think people want leaders, and they want to be in a city with fellow citizens who think the best. I think that's the hope for the future."

Mayor Savage will ring in 2020 with a New Year's Eve concert at Grand Parade on December 31.

On January 1, the annual New Year's Levee will begin at City Hall at 9:30 a.m., and Savage will then attend Levees across the region including the Lieutenant Governor's office, Stadacona, and various Legions.

"We encourage everybody to come down," he says. "Everybody comes together in the spirit of reflecting on the year that we've had and looking forward to 2020."