On Saturday afternoon, Minister of Agriculture Keith Colwell made an announcement at the Clayton Park Sobeys in partnership with Taste of Nova Scotia.

A new food and beverage campaign called Get Your Hands on Local will make it easier to identify products grown or produced in Nova Scotia.

"I know I have many friends that say we want to buy local products but we can't find them. Even though they may be looking right at them and not realizing it's produced in Nova Scotia," Colwell told reporters at the event.

The marketing campaign will mark locally-made products with stickers and in-store displays, in all Sobeys, Superstore, Walmart, NSLC and some independent grocers. A total of 21 stores around the province held events Saturday to mark the launch of the program.

"You're going to see all kinds of advertisements out, we're going to have a continuous presence in all the stores in the province," says Colwell. "And we're going to roll this out to the farmer's markets too, even though they're pretty well local now."

The Department of Agriculture says this will benefit over 200 farmers, fishers, chefs, winemakers, brewers, distillers, bakers, chocolatiers across the province and will run until April.

"We have a wide range of products both in the fishing industry and the farming industry, and it really helps create economic benefit to the community," Colwell explains.

"The UN is telling us, in the next 10 years by 2030 there's not going to be enough food in the world to feed the population of the world," he says. "So it's very important we have food security in the province."

Aside from creating jobs in the short-term, Colwell says supporting locally-made products will impact our future.

"If we don't support our farmers and our fishing industry, they won't be there, and if they're not there we don't have a food supply," he adds.

At Saturday's event, Kitchen Door chef Andrew Farrell was offering samples of roasted turnip and apple soup with blueberry drizzle and granola topping -- all made from Nova Scotian ingredients. 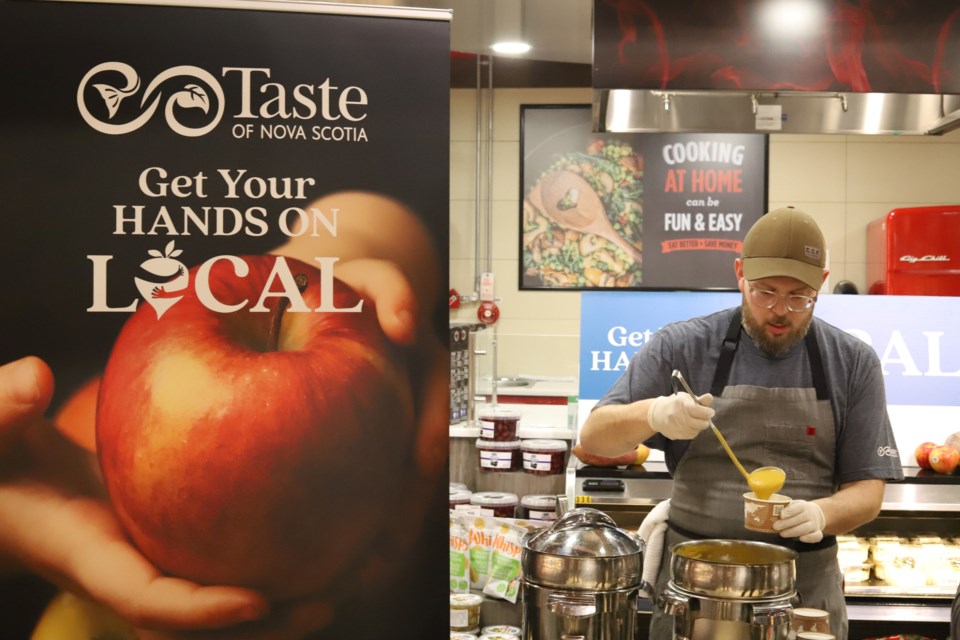 "Nova Scotians want to be able to source local food where they shop, where they eat, where they drink," says Taste of Nova Scotia Executive Director Emily Haynes. "And we want to make it easy for them to identify locally grown and produced food and beverage so the choice is easy for them."

The campaign will go year-round, and Haynes says many Nova Scotians will be surprised by the amount of locally-made products available during the winter.

"We often think that in the winter it's harder to find local, and there's still an abundance of product that you can get year-round," she says.

Taste of Nova Scotia is funded by the government, and today's announcement replaces the previous Select Nova Scotia campaign. One benefit of the Get Your Hands on Local campaign is that it will be uniform across the province.

"We really wanted a message and a brand that is the same across the province and everywhere you go with every retailer.," says Haynes. "Regardless of where you are in the province, which retailer you shop with, where you dine, where you drink."

The Agriculture Minister says the program goal is to double the $1.52 million of locally-produced food documented in in the 2014 Ivany Report.

"We don't have the exact number now but with this campaign we're going to track it," he says. "In a years time we want people coming looking for products that we don't produce in Nova Scotia, demanding that we grow it here or start producing it here. If we get to that point, we'll be successful."

Editor's Note: A previous version of this story quoted Minister Colwell saying Costco is also part of this campaign. A communications representative for the Deparmtent of Agriculture indicates that Colwell misspoke and that is not the case. The story has been updated to reflect the change.