The procession is now underway. You can follow its progress in the stream above.

The following is a replay of a Canadian Forces Snowbirds stream from the tarmac:

Early this morning, a CC-130J Hercules carrying Capt. Jenn Casey's remains lifted off from Abbotsford, B.C. and is expected to arrive at the Halifax Stanfield International Airport at 5 p.m., says the Canadian Forces Snowbirds.

Following a brief service on the tarmac, a procession will travel through the city in honour of Casey, the Haligonian public affairs officer for the Snowbirds aerobatic team who died last week when the plane she was in crashed in Kamloops, B.C.

Casey was part of Operation Inspiration, trying to raise morale across the country in the face of the pandemic.

Participants and spectators have been encouraged to wear the Snowbirds colours — red and white — or Habs jerseys, Tragically Hip apparel, or Star Wars clothing — all things Jenn was a fan of, according to her family. Spectators and participants are asked to keep their social distance from each other due to COVID-19.

The following is a map released by the Canadian Forces Snowbirds detailing the route: 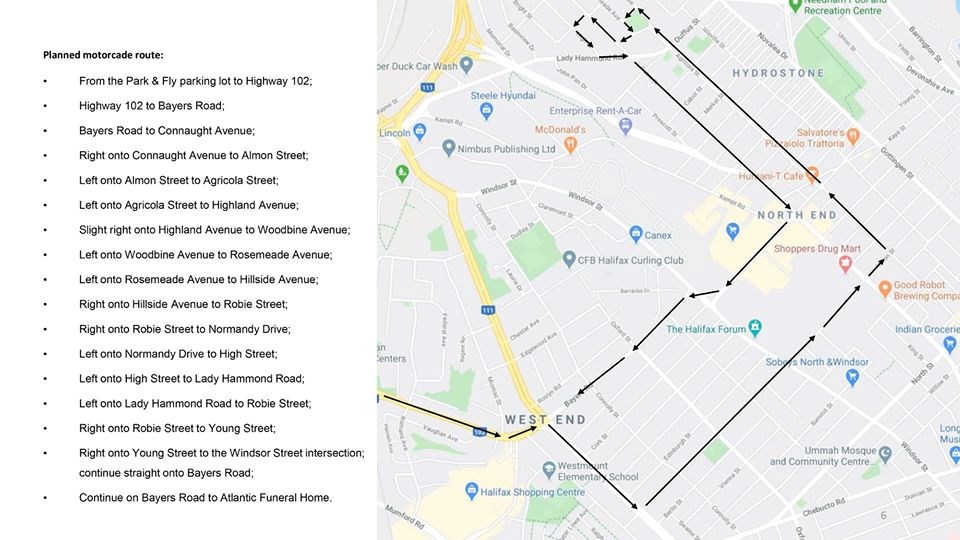 The Snowbirds have issued at note that the procession will not exit the Halifax Airport via Bell Blvd, but will instead proceed from the Shell Aerocentre onto Barnes Drive, right onto Baldwin Drive, left onto Pratt & Whitney Drive, right onto Aerotech Dr and then left onto the exit for Highway 102 Southbound to Halifax.

Why a child's freedom to travel and play without adult supervision matters
Jul 11, 2020 7:00 AM

Good Morning, Halifax!
Jul 11, 2020 5:00 AM
Comments
We welcome your feedback and encourage you to share your thoughts. We ask that you be respectful of others and their points of view, refrain from personal attacks and stay on topic. To learn about our commenting policies and how we moderate, please read our Community Guidelines.