Catherine Chamber told an inquiry today she was concerned the former sniper had experienced a 'single trauma' the night he and his wife were involved in a minor road accident
0
Feb 13, 2020 11:42 AM By: Canadian Press 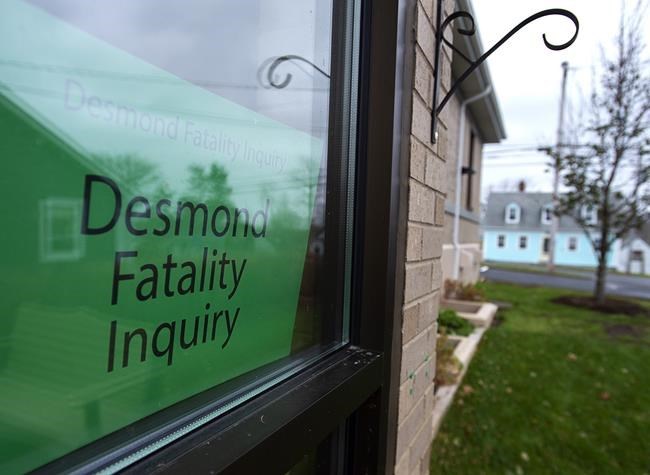 GUYSBOROUGH, N.S. — The judge overseeing an inquiry into a triple-murder and suicide carried out by an Afghanistan war veteran says Lionel Desmond faced a large gap in treatment for a severe case of post-traumatic stress disorder.

Provincial court Judge Warren Zimmer also told the inquiry that Veterans Affairs Canada did not share key information about Desmond's mental illnesses with the last health professional to talk to the former soldier before he killed his family and himself inside their rural Nova Scotia home in January 2017.

Zimmer said the fatality inquiry has heard evidence that after Desmond was discharged from a residential treatment facility in Quebec in August 2016, he received no actual therapeutic treatment before the killings four months later.

The inquiry has heard that Desmond sought help through a Nova Scotia hospital's emergency room on two occasions before he managed to meet in November 2016 with a community-based psychotherapist in Antigonish, N.S., contracted by Veterans Affairs.

Catherine Chambers, a therapist who specializes in treating PTSD, told the inquiry she had been in touch with Desmond's case manager at Veterans Affairs, but never received any medical documents from the department.

Zimmer read from Veterans Affairs reports indicating Desmond had not responded well to the treatment at the Quebec facility, and that the former infantryman could be suffering from cognitive impairments that required a sophisticated neuropsychological assessment.

"I want you to have an appreciation for what was known at the time that he was discharged and was coming to you," Zimmer told Chambers. "It's important to appreciate that all of this information was sitting there, and you had none of it."

Zimmer then cited testimony from a psychiatrist in Antigonish who said in a Dec. 2, 2016, report that it appeared Desmond was "falling through the cracks in terms of follow-up by military and veterans programs."

"The information would have been valuable for you to know," Zimmer told Chambers, "that the person who's coming to see you had, by the view of Dr. Slayter, 'fallen through the cracks?'"

Chambers agreed, saying the recommendation that Desmond receive a neuropsychological assessment for cognitive problems meant he wasn't a good fit for community-based psychotherapy.

Zimmer responded: "You were given no heads up that (a neuropsychological assessment) was an important part of what was being recommended. Without cognitive wellness, your interventions are going to be frustrated?"

This report by The Canadian Press was first published Feb. 13, 2020.

Note to readers: This is a corrected story. A previous version referred to Desmond as a former sniper.

Official says she would have denied Desmond a gun licence had she known more
Feb 20, 2020 4:31 PM