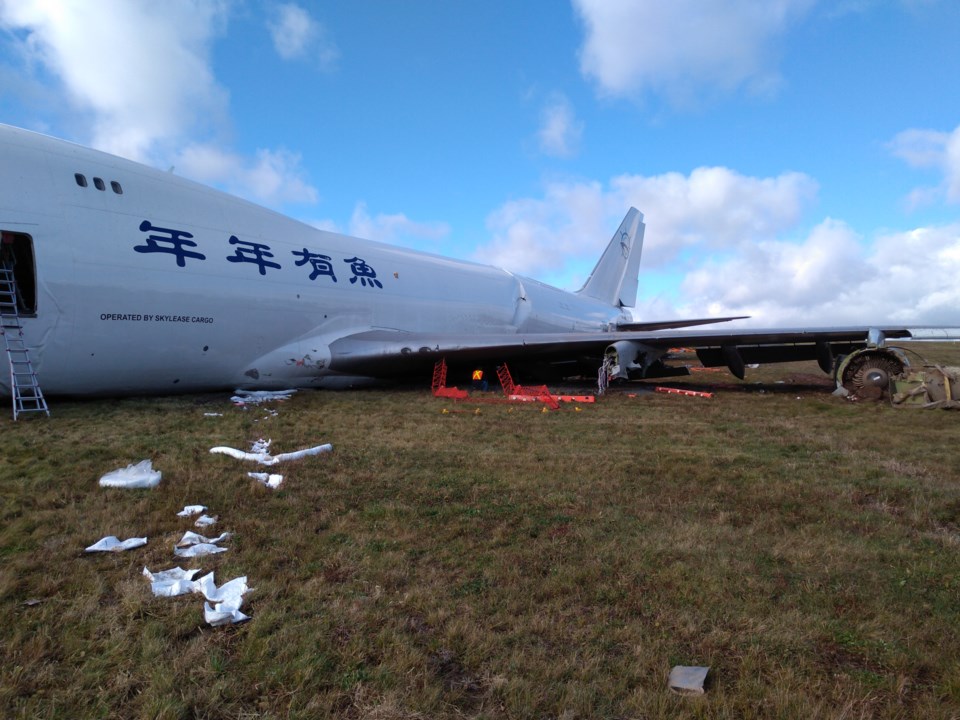 (Photo courtesy of the Transportation Safety Board of Canada)

HALIFAX — The Boeing 747 cargo jet that overshot a Halifax runway this week had touched down in rainy conditions while being buffeted by a crosswind with a potential tailwind, the Transportation Safety Board of Canada said Thursday.

The four crew members suffered minor injuries and the empty SkyLease Cargo plane was badly damaged on Wednesday when it slid 210 metres off the end of Runway 14 at Halifax Stanfield International Airport.

As it skidded down a slight, grassy embankment, the plane hit a large localizer antenna, its landing gear collapsed, two of its four engines were torn off and there was a small fire under the tail section — caused by one of the severed engines.

"I believe it was the pilot's request (to use) that runway, but that's preliminary," lead investigator Austin Adams told a media briefing at a hotel near the airport.

He said weather data recorded seven minutes before the aircraft landed showed the wind was gusting at 33 kilometres per hour from the west at 250 degrees.

The aircraft, headed in a southeasterly direction, was hit by a strong crosswind, which included the potential for a "quarterly tailwind," Adams said.

"Ideally an airplane wants to land into the wind," he said, but added that landing decisions are also based on the aircraft and the runway's navigational aids.

Aviation analyst and former safety board investigator Larry Vance has said it appears the plane landed with a tailwind — something he called an "immediate red flag."

Airplanes typically take off and land into the wind, which offers pilots more lift and, as a result, more control.

However, all aircraft are designed to land with a crosswind or tailwind, though each aircraft has its limits, said TSB investigator Isabelle Langevin. She said the board will be looking into the limits for the Boeing 747-400.

When asked why a pilot would choose to land on a wet runway while dealing with a tailwind, Adams said it all comes down to what was decided in the cockpit.

"I don't want to speculate or state anything," he said. "I want to engage the crew and speak with them about their decision-making process."

Flight KKE 4854, which had arrived from Chicago just after 5 a.m. after a two-and-a-half hour flight, was to be loaded with live lobster destined for China.

The safety board, which is an independent agency, says there has been an average of nine overrun incidents every year in Canada since 2013.

"The consequences can be particularly serious when there is no adequate runway-end safety area or suitable arresting material," the board said in a statement.

A runway-end safety area is a buffer strip that extends past the end of a runway. It gives planes extra stopping distance and can reduce damage and risk to passengers in the event of an overrun.

Transport Canada requires an extra 60 metres of prepared surface at the end of most runways, though it recommends an additional 90 metres for a total margin of 150 metres. The International Civil Aviation Organization recommends a 300-metre buffer strip.

Langevin said Runway 14 in Halifax has an extra 140 metres, falling 10 metres short of the recommended guidelines — though the cargo jet slid 210 metres off the end of the runway.

In the days ahead, Adams said his team will interview the crew and analyze the data from the aircraft's cockpit voice recorder and flight data recorder. They also plan to talk to witnesses, air traffic controllers and airport personnel.

If the investigation uncovers any safety deficiencies that present an immediate risk, that information will be immediately relayed to the public and safety officials.

The investigative team includes about 15 people, including a "human factors specialist" who will examine the decision-making process of those involved in the accident, Adams said.

The specialist will probe human performance, he said, including assessing whether fatigue was a factor on the overnight flight.

The 183,500 kilogram jumbo jet attracted dozens of onlookers Thursday, with cars parked along the Old Guysborough Road on the airport's eastern edge.

Children and adults appeared equally gobsmacked by the massive plane, resting just feet from a barbed-wire fence that separates the airport from a public, two-lane road.

Some sightseers snapped selfies, while others sipped coffee from their car or strolled along the chain-link perimeter.

It's unclear how long the aircraft will remain a tourist attraction, with investigators saying they will keep inspecting the jet as long as necessary.

"It's always complex because you don't know what you will uncover," Langevin said. "As we gather data and we start analyzing it, it may lead us in a different direction. Nothing is ever straightforward."

The runway will remain closed while the investigation is ongoing.