'It wasn't much of a response,' says mother after asking Trudeau autism strategy question

Carly Sutherland told the crowd at Sackville High School that her son, Callum, is violent to the point where he cannot go to school and he physically assaults her daily
Jan 10, 2018 11:37 AM By: Meghan Groff 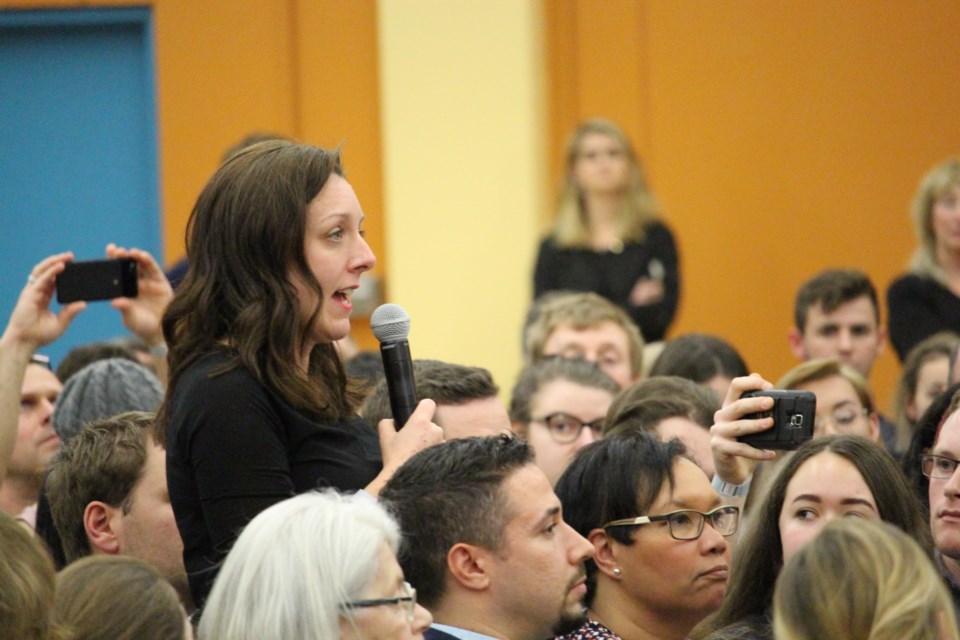 Carly Sutherland, the mother of a 9-year-old with severe autism, asks Justin Trudeau a question at a town hall meeting on January 9, 2018 (Katie Hartai/HalifaxToday.ca)

The mother of a boy with severe autism feels the prime minister dodged her question at Tuesday night's town hall meeting in Lower Sackville.

Carly Sutherland told the crowd at Sackville High School that her son, Callum, is violent to the point where he cannot go to school and he physically assaults her daily.

She asked Trudeau where his government stands on a national autism strategy.

"This is something that so many families across this country face," Trudeau responded. "And it is something we all have to work together to do a better job to address."

He added the federal government is investing significant amounts of money into the Canadian Institute for Health Research and it continues to fund community autism support groups.

"I felt he did dodge the question," Sutherland told NEWS 95.7's The Rick Howe Show. "He did not talk about a national strategy. Research is not helpful for families like mine, who in this moment desperately need to see that research translate into action."

Sutherland said, right now, provinces are operating in silos, and smaller provinces like Nova Scotia don't have the capacity to deal with the issue.

"Right now there is no coordinated leadership on this issue, services are fragmented right across the country," she explained. "There are researchers everywhere doing incredible work and people putting that research into practice, yet nobody is coming together and saying, 'This is the best practice, this is the policy, this is the absolute minimum that should be available to these children.' "

Callum can't communicate verbally, and according to Sutherland, he expresses his frustration through violence. At 9 years old, he is now almost as big as his mother, and he's getting stronger.

Sutherland said he's on a list for a placement, but that could take years.

"There simply is not adequate housing for adults and children with developmental disabilities in this province."

She said at this point, she's not holding out hope that help is on the horizon for her own family, but continues to advocate for a national strategy for other families, some of whose children have yet to be diagnosed or even born.

Sutherland wasn't expecting Trudeau to give her the answer she wanted at the town hall and is happy she got a chance to ask her question.