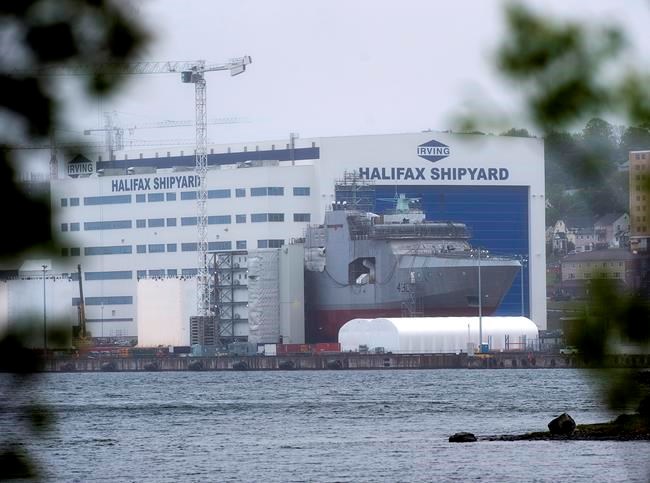 HALIFAX — The union at the Halifax shipyard where the "backbone" of the next generation of Royal Canadian Navy vessels are being built has given 48-hour strike notice, with picket lines expected to go up Saturday morning.

Marine Workers Federation Local 1 said in the release that 75 per cent of its members voted against the deal offered following eight months of negotiations.

The union said the four-year tentative agreement that was rejected included wage increases of 1.5 per cent per year over the next four years.

Chad Johnston, a Unifor national representative and lead negotiator, noted tensions were high going into negotiations, and the issues are not just about economics.

"There were a lot of discipline issues that were increasing in the workplace, and it led to an overall tense round of negotiations," said Johnston at a news conference Thursday.

Johnston said there had been a change in leadership and with it came increased disciplinary actions, where the "punishment did not fit the crime." He said there were about 100 disciplinary occurrences in 2014, compared to 300 cases in 2016.

"It's about the respect of the workforce and treating people fairly," he said. "These are coveted jobs. We know they're good jobs. But good pay does not give the right of an employer to use poor treatment."

He said another contentious issue is the company's use of temporary foreign workers.

"When we have a seven per cent unemployment rates in Nova Scotia and 11,000 applications on file, then Unifor's position is that there's absolutely no question that the qualifications exist in this province, and if not in the province, definitely within the country, for shipbuilders," Johnston said.

He said the union is still willing to sit down with the company, but there are no meetings planned at this point.

Kevin McCoy, president of Irving Shipbuilding, said in a statement Thursday that the tentative agreement rejected by the union membership was fair for the company and union.

"Given that both the local and national members of the union bargaining committee recommended that this tentative agreement should be accepted, in the days ahead we will keep the lines of communication open with the union in the hope that they will reconsider their position," McCoy said.

"Halifax Shipyard shipbuilders have well-paying careers in a modern workplace that allows them and their families to plan for the future. We hope they will reconsider their position on the proposed collective agreement."

The statement said the agreement would see a journeyperson shipbuilder's hourly rate increase from $34.80 to $35.32, and includes increased RRSP contributions and improved access to vacation time.

Larry Haiven, a professor emeritus of labour relations at the Sobeys School of Business at Saint Mary's University in Halifax, said in an interview that it appears the tensions have been brewing for some time.

"This comes after several years of management tightening the screws. There's a lot of baggage that comes into this set of negotiations," he said.

Still, the observer of Halifax's labour scene said it's difficult to predict what will unfold in the closing hours before the anticipated walkout.

"You never know until the 11th hour and even past it," he said.

Haiven said while the union membership may be "angry," the right offer could still prevent a strike.

One factor that may encourage a deal is that the shipbuilding yard is on a tight schedule to produce the order for the federal government, Haiven said.

"The fact there are orders on the books and nobody wants to see the place shut down for awhile is going to push both sides," he said.

In a news release issued on May 30 by J.D. Irving said Canada's first Arctic and offshore patrol ship is set to launch this fall.

The shipyard said it is planning to build up to six Arctic and offshore Patrol Ships and 15 Canadian Surface Combatants over the next 25 years, referring to the projects as "the backbone of the Royal Canadian Navy."

The first three ships, Harry DeWolf, Margaret Brooke and Max Bernays, are currently under construction at the shipyard.

— With files from Aly Thomson in Halifax.