'I know nothing' : Construction crane evacuee struggling to get updates on the situation

'It sounded like the most intense thunder crash you could imagine,' said Rebecca Carole
Sep 11, 2019 4:00 PM By: Meghan Groff 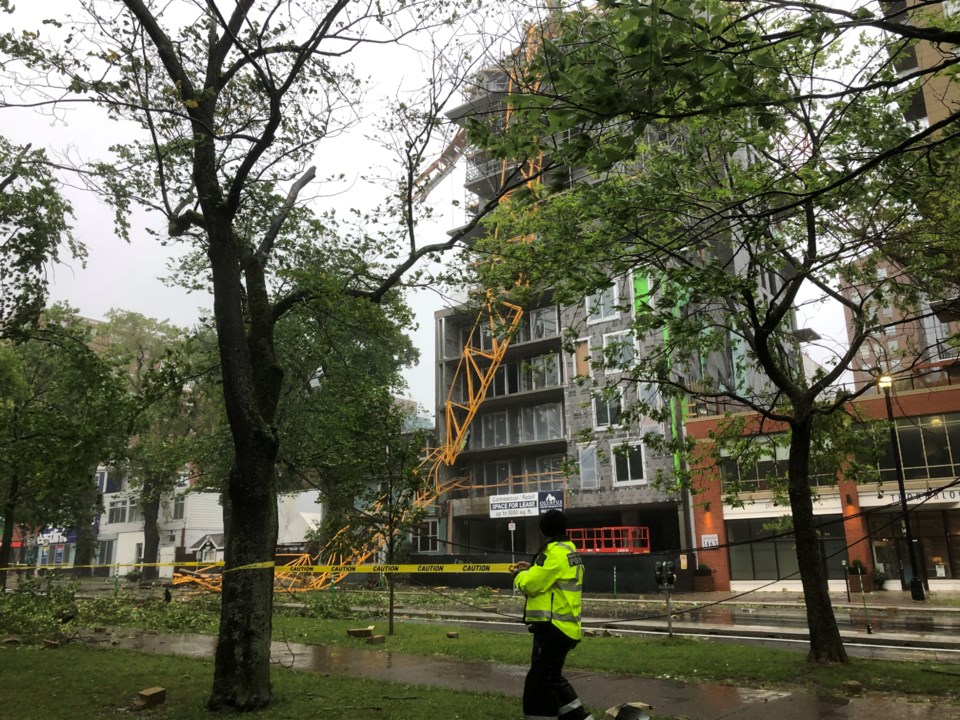 One of the nearly 40 residents evacuated from their homes due to the potential danger of a collapsed construction crane says she's been having a difficult time getting updates on the situation.

She was at home during the storm when hurricane-force winds toppled the massive metal structure Saturday night.

"It sounded like the most intense thunder crash you could imagine," Carole said.

"I went downstairs, peaked my head out and I just saw it kind of draped over the side of the building," she told NEWS 95.7's The Sheldon MacLeod Show. "All of the power lines were down. It was definitely pretty scary. We're fortunate nothing caught on fire."

Two days after the crane collapsed, Carole and her boyfriend were told to evacuate.

"It was the fire department who came to my door ... they told us you have 20 minutes, just pack your bags, get as much as you can and get out right away," she said. "They told us a minimum of four days, but I haven't heard any updates. I wasn't really given any contacts to call for updates. I'm wondering how to find out what's happening and where the progress is at."

There weren't any vacancies at area hotels, so the couple is currently renting a place through Airbnb. They'll be heading to the Valley to stay with family over the weekend, and after that, Carole isn't sure where they'll be sleeping.

Right now, they're paying for their accommodations out of pocket.

Around noon on Wednesday, councillor for the area, Waye Mason, tweeted that the builder, WM Fares, is providing financial support to evacuees.

That was the first Carole had heard about potential reimbursement.

By 3 p.m., she had talked to Mason and was waiting to get more information from the contactors.

Carole understands there are a lot of unknowns when it comes to the timeline of removing the crane, but she wishes evacuees were being kept in the loop on what's going on and when they might be able to return home.

"Even it we just got updates every day," she said. "I honestly have no idea who to contact about updates."