Tropical storm, wind, rain and storm surge warnings have all been issued for Halifax
Sep 22, 2020 3:30 PM By: Meghan Groff 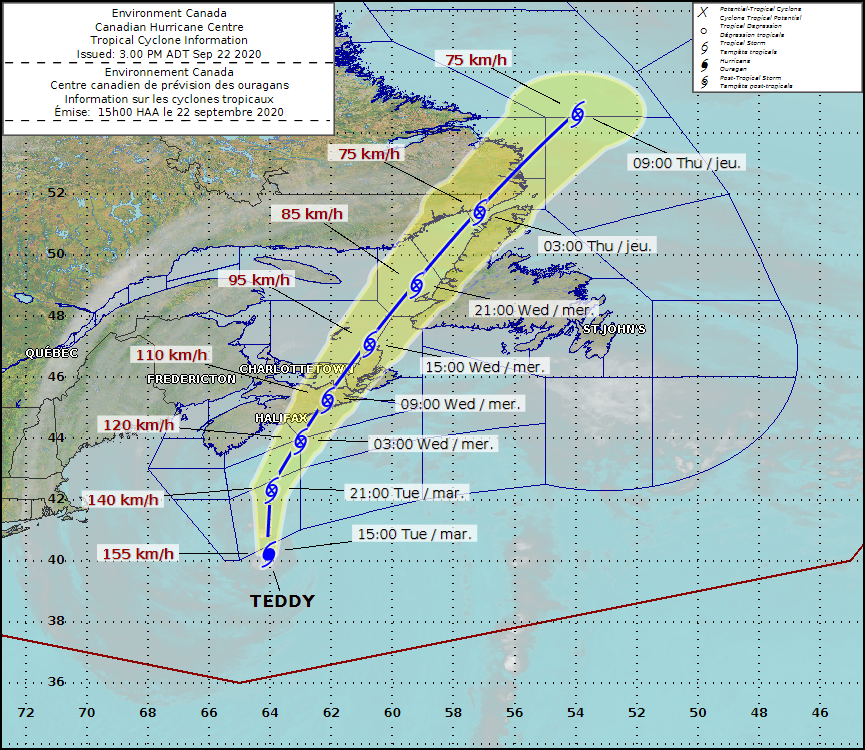 The Canadian Hurricane Centre's projected track for Teddy as of 3 p.m. on Tuesday, Sept. 22

Forecasters with Environment Canada's Hurricane Centre are cautioning Nova Scotians that Hurricane Teddy is going to bring us a one-two punch, with a lull in wind expected overnight.

The system is expected to be post-tropical by the time the centre reaches our province's shore Wednesday morning.

Tropical storm, wind, rain and storm surge warnings have all been issued for the Halifax area.

"It is now a very large and powerful storm about 500 km to the south of Halifax," said the Canadian Hurricane Centre's Bob Robichaud at a 1 p.m. briefing Tuesday.

"We expect that by tonight it will start that anticipated turn to the northeast, and probably cross the coastline ... kind of halfway up the Eastern Shore of Nova Scotia during the morning hours of Wednesday."

The strongest winds will be to the east of the track, which could reach gusts of 100 km/h.

"To the west of the track, the winds shouldn't be quite as strong, but they still could gust fairly high along the Atlantic coast from the point where the storm crosses the coastline all the way down to the South Shore."

Wind gusts are expected to diminish overnight then pick up again Wednesday morning.

The heaviest rain will be to the left or west of the track, which includes Halifax.

"Amounts there, we're looking at 50 to 75 ... but there could be a few pockets in there that exceed 75 mm," Robichaud explained.

He said big waves are already crashing ashore, and they'll gradually increase in height, peaking this evening and overnight in the Halifax area.

Officials are pleading with Nova Scotians to stay away from the coastline during Teddy's visit.

"We've lost a lot of people who have gone to the coastline to watch those waves, and that's what we need to avoid," Robichaud said earlier Tuesday at a provincial preparedness briefing.

"Remember if you get trapped out there, somebody has to come and try to rescue you, so we are putting people in jeopardy unnecessarily by doing such things."

Teddy has caused some closures and cancellations in the Halifax region.