Environment Canada meterologist Andy Firth says its too early to say if Nova Scotia will be impacted
Aug 1, 2020 11:27 AM By: HalifaxToday Staff 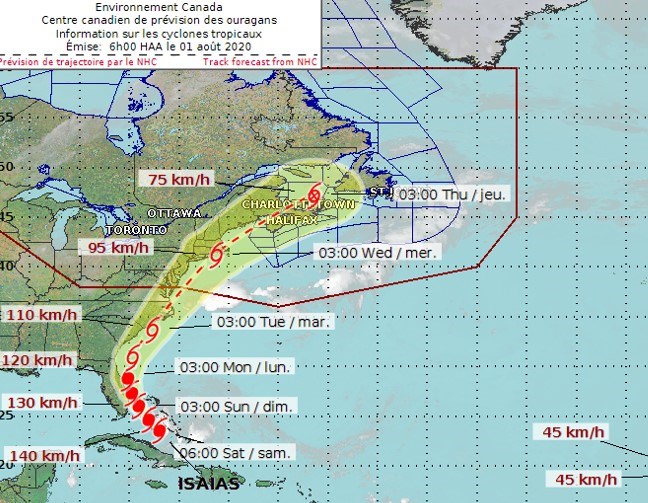 Hurricane Isaias may be ripping shingles off roofs and blowing over trees as it carves its way through the Bahamas and heads toward the Florida coast, but officials say it is too early to know what kind of impact the storm may have in Atlantic Canada.

As of now, the National Hurricane Centre in the United States is projecting the storm to enter eastern Canada as a post tropical depression by midweek.

But Environment Canada meterologist Andy Firth says its too early to say if Nova Scotia will be impacted.

"At this point in time, the message we want to have out there is to have people to continue to monitor the messages that they see and know that the track forecast for day 5 usually has a margin of error that is quite large for intensity and for position," said Firth.

Firth added that the model is "more of a general guidance to know that somewhere in eastern Canada we could be having a tropical system five days from now."

Firth encourages people to be aware and monitor the storm's progress. He adds that the speed of the storm has been slowing down and that he anticipates it to downgrade to a post-tropical system by the time it reaches eastern Canada towards the middle of the week.