Attendees gathered on the Halifax waterfront to show their support for the Mi'kmaq community
Sep 26, 2020 6:58 PM By: Chris Stoodley Attendees held signs and banners on the stage of the Sept. 26 rally (Chris Stoodley/HalifaxToday.ca)

Hundreds of people stood in solidarity on the Halifax waterfront Saturday morning in solidarity with the Mi’kmaw fishers in southwestern Nova Scotia.

The rally, which took place at Sackville Landing, was organized in support of the Mi’kmaw fishers who are being attacked by non-Indigenous fishers.

“Make it make sense,” says Michelle Paul, a Mi’kmaw water protector who spoke at the rally. “Make it make sense that they’re talking about reconciliation when our people are out there on the waters being frightened for exercising the right that’s existed all this time; make it make sense.” 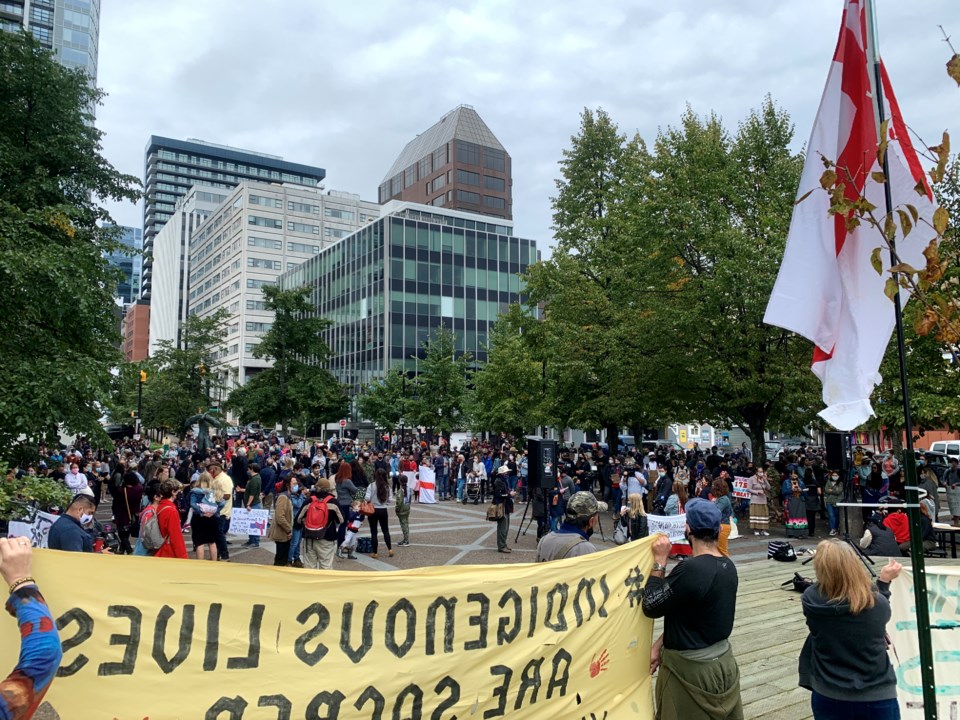 Hundreds of people stood in solidarity for the Mi'kmaw fishers in southwestern Nova Scotia (Chris Stoodley/HalifaxToday.ca)

Since Sept. 15, tension has been escalating between the fishers in Saulnierville, N.S. On Sept. 17, tensions grew stronger.

To intimidate Mi’kmaw fishers, non-Indigenous fishers have been using numerous tactics. This includes cutting and taking the lobster traps owned by Mi’kmaw fishers, constructing walls to prevent Mi’kmaw fishers from accessing their boats and firing flares directly at Mi’kmaq-owned boats.

On top of that, sharpened bolts are being placed around the wharf parking area to intentionally pop the tires of vehicles owned by Mi’kmaw fishers and supporters. Some Mi’kmaq rights holders have also been denied service from some stores and businesses while trying to buy Mi’kmaq harvested lobster.

“All through Mi’kma’ki we have fought for our own existence, our right to live, our rights to live off our own lands and waters,” says Dorene Bernard, a Mi’kmaw grassroots Grandmother and water protector. “We’ve been here for 30,500 years. Why can’t they understand the history? I’ll tell you — because you were never taught that; you were never taught this history in schools.”

In 1993, a Mi’kmaw man from Membertou First Nation named Donald Marshall Jr. was arrested in Sydney, N.S. He was arrested for catching and selling eel without a license, using an illegal net and fishing off-season.

Then, under the federal Fisheries Act and the Maritime Provinces Fishery Regulations, he was found guilty and charged of all three counts.

But in 1999, the Supreme Court of Canada reversed this decision. It recognized the hunting and fishing rights promised in the Peace and Friendship Treaties. Judges created the term “moderate livelihood” allowing the Mi’kmaq to make a living.

This decision is known as the Marshall Case — a landmark ruling in Indigenous treaty rights in Canada.

Furthermore, Aboriginal title and rights are protected under the Constitution Act, 1982. These rights include the right to hunt and fish unhindered and the inherent right to self-governance.

Finally, the 1752 Peace and Friendship Treaty says that “it is agreed that the said Tribe of Indians shall not be hindered from, but have free liberty of Hunting & Fishing as usual.”

But compared to large corporations that dominate the industry, such as Clearwater Seafoods, Mi’kmaq fishing only makes up a small proportion of the industry.

Currently, non-Indigenous commercial fishers have around 985 licenses in the southwest Nova Scotia area alone. For each license, they’re given 375 trap tags; this equals more than 350,000 commercial lobster traps.

In comparison, Sipekne’katik First Nation’s fishery that gave out seven licenses has 350 lobster traps in the same area. On top of that, there are around 60 Mi’kmaw harvesters currently fishing in the Bay of Fundy and St. Mary’s Bay.

“But racism is learned, just like your education,” she says. “You’re taught to hate.”

Water protector Michelle Paul says she hopes people of all ages will learn about Indigenous treaties, why they were signed and what was happening during that time.

Numerous people who attended the event also brought their children. Carmen Bartlett was one of those attendees. She’s the daughter of Ardy Born With Three Thumbs, a Mi’kmaq warrior who was a prominent figure in the Mi’kmaq community.

“My mother notoriously began defending treaty and Aboriginal rights in 1977, and I’m here because her fight was not enough for the next generation,” she says. “So, I’m here to show my kids that we have to stand in solidarity because our treaty rights are without contingency.”

According to CTV News, a spokesperson with the Department of Fisheries and Oceans says a conservation and protection team is “monitoring activity in southwest Nova Scotia.”

But according to the article, Chief Michael Sack of the Sipekne’katik First Nation says he’s not satisfied with the federal government’s response to the conflict. He says he wants the government to uphold treaty rights and protect Mi’kmaw fishers.