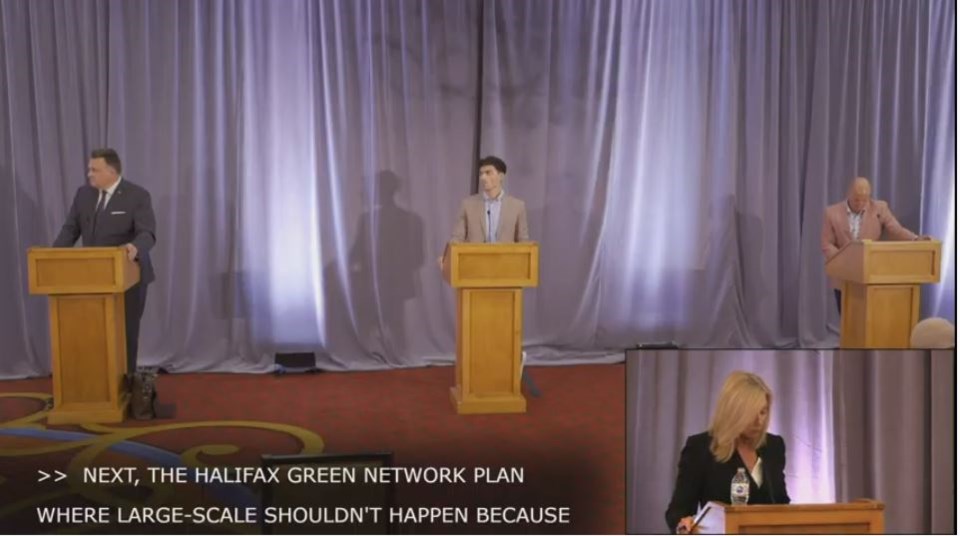 A screenshot of the virtual mayoral candidates forum

Halifax's three mayoral candidates participated in a virtual forum Wednesday, answering several questions about where they stand on municipal issues.

Mayor Mike Savage, Matt Whitman and Max Taylor all answered questions about a slew of topics, including calls to defund the police.

Mayor Savage says you can't look at this issue without looking at it from the perspective of the Black community.

"I remember that shortly after the George Floyd incident in Minneapolis, the chief of the police union sent a letter, saying, 'I recognize this is an issue and I want to be a part of it,'" said Savage. "We should all be a part of it, but we have to look at what everybody else is saying."

Whitman says he doesn't believe they should defund the police but is in support of body cameras.

"I think they would protect police and protect citizens," he said. "If you have nothing to hide, I think you should have a body camera on you and it's very helpful from both sides."

Taylor believes it's a complicated issue but adds more resources should be devoted to mental health services.

"Right now, it's almost embarrassing how many mental health professionals are in the police force," said Taylor. "You need to have mental health advocacy."

In his closing remarks, Mayor Savage said he wants to continue to be Halifax's mayor, adding the city has done well under his watch.

Whitman is asking people to vote for him as says he will prioritize taxpayer needs, while Taylor is urging Haligonians to get out and exercise their right to vote.

Q&A with Halifax's three mayoral candidates
Sep 15, 2020 9:45 AM
Comments
We welcome your feedback and encourage you to share your thoughts. We ask that you be respectful of others and their points of view, refrain from personal attacks and stay on topic. To learn about our commenting policies and how we moderate, please read our Community Guidelines.