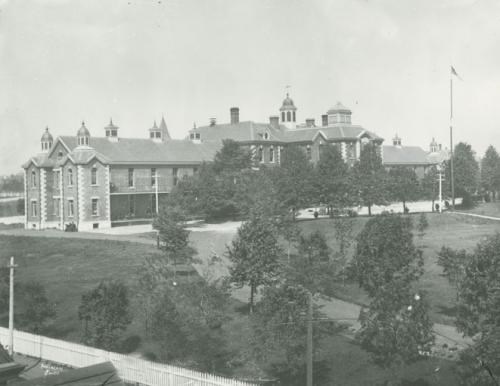 Back in 1918, the First World War was coming to an end and Canadian soldiers were returning home.

But unbeknownst to them, many brought with them a virus that Canada had never seen -- Spanish influenza.

"When the soldiers were brought back into Canada they would usually bring them into Halifax. The soldiers would then get on the train and they would move across Canada and wherever they had come from they would get off the train," says historian Dr. Allan Marble.

Marble, who is also the Chair of the Medical History Research Society of Nova Scotia, has been studying the history of the Spanish flu for the better part of a decade.

"There was no interest shown at all in that there was nothing published on the Spanish Influenza and the impact on Nova Scotia or on Canada until 2013, which is almost 100 years after the event took place in 1918-19," he tells NEWS 95.7's The Todd Veinotte Show.

The Halifax-based historian says most people were put off from talking about it because of stories they'd heard.

"Some people say they'd rather not know about it because from what they heard from their grandparents," he says. "It was such a tragic event in the history of Nova Scotia and in families in Nova Scotia, that everyone wanted to just forget about it."

But by researching and through interviews, Marble is learning as much as he can about the Spanish flu's impact on Nova Scotia, where it killed an estimated 2,200 people.

"You don't forget about history, you try to learn from it," says Marble.

Marble says that the flu first appeared in humans in one of two locations: Kansas, U.S.A. or somewhere in rural China. In either instance, he says the Spanish flu likely came from animals.

"The way a virus usually travels or transmits, it's from birds to swine to people," he says.

In September of 1918, Marble says a doctor in Kansas began noticing severe flu symptoms in some patients.

Marble explains that the misnomer of the "Spanish" flu came from wartime censorship of the press. Because Spain was neutral during WWI, they were the only country to admit the flu was impacting them.

"Because it was the only set of newspapers that was putting out information, everyone thought oh it must be coming from Spain, and it became known as the Spanish flu and I guess it'll always be called the Spanish flu even though it really has nothing to do with Spain," he says.

Within weeks, the infected soldiers had gotten even more troops sick with the flu, and all of Europe was affected. By the time the war ended in November 1918, Canadian soldiers were returning home with the virus.

"The first soldier that we know of who arrives back in Canada with the flu was a young man who was from Inverness County Cape Breton," explains Marble.

The historian says that within two weeks, 17 people in Inverness area had died.

Marble has been researching how the flu travelled. In a time when vaccinations were new, he says doctors didn't know that Spanish Influenza was a virus, not a bacterial disease.

"At that time there was no vaccine, no flu shot, nothing like that," he says. "We do have such a thing now of course."

Around the world, between 35 and 50 million people died from the Spanish flu. But Marble says that from the outbreak, Canadian historians and medical experts can learn a lot.

"What ages were dying? Were there any ethnic groups that seemed to be more vulnerable than others? Were more women dying than men?" are just some of the questions Marble says he's been trying to answer.

Across Canada, an estimated 55,000 people died.

"Saskatchewan and Alberta where most of the people lived close to the rail line, had very high death rates from Spanish Influenza," says Marble. "Nova Scotia had the lowest death rate of any province in Canada."

Marble explains that Nova Scotia's low death toll is due to our large amount of doctors, including the Mayor at the time, Arthur Hawkins.

"He immediately closed all of the public buildings in Halifax and eventually all over Nova Scotia. All churches, all schools, all universities, all bowling allies. Every public place was closed down for six weeks," says Marble.

Over one hundred years later, Marble says historians like himself are only now learning how modern medicine has improved thanks to the Spanish flu.

"The governments decided that it was time to set up a national public health system in Canada and that each province should have a public health department, and that they should, if anything like this happened again they would be prepared," he says.

With the widespread use of vaccines, clean standard of living, and general good health, if the Spanish flu broke out today, Marble thinks we'd tackle it before it becomes a pandemic.

"During the last 100 years, the public health movement has learned a great deal and is now ready," he adds. "Whenever October arrives each year everyone is urged to get the flu shot, and hopefully people will. The real message out of the Spanish Influenza is prevention. Getting ready for trying to immunize people against what may be a devastating flu."