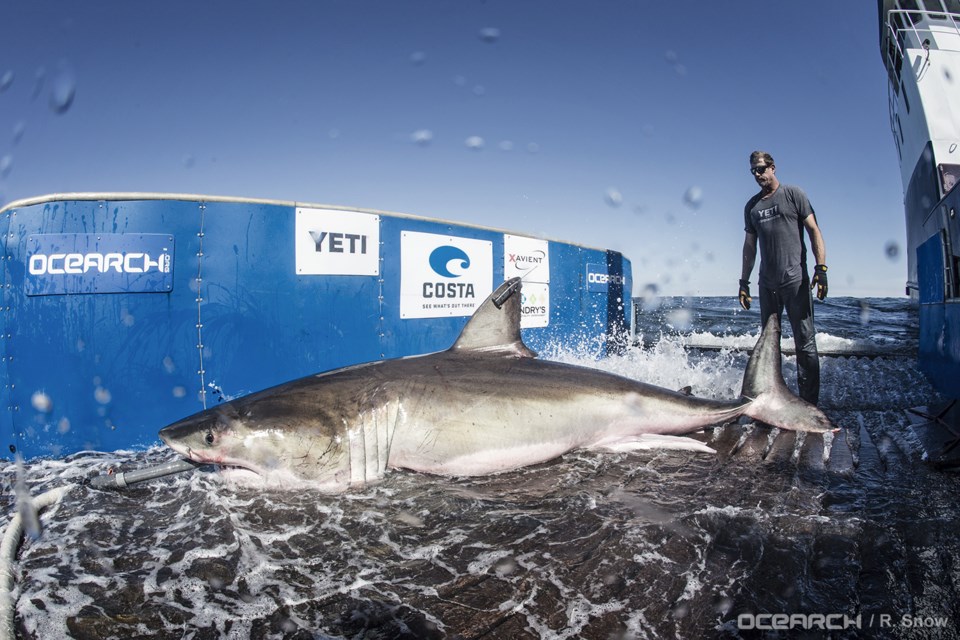 Chris Fischer was shocked when he found out how little is known in the scientific community about the mating of great white sharks.

About 11 years ago, the founding chairman of OCEARCH was working with scientists studying billfish, tuna and other sea life. They kept talking about how the shark population had reached a crisis level and how it could lead to the destruction of other species like lobster, shellfish and tuna.

"In the open ocean when you lose the shark, the squid explode and every night when they migrate to the surface they eat all the baby bluefin tuna and the baby yellowfin tuna," he explained.

Fischer asked the researchers where the sharks were breeding and where they were giving birth.

His mission will bring the OCEARCH team to Nova Scotia next month, all because of a great white shark that has become a Twitter celebrity in the province.

"We've known that some white sharks wander up into that region for a number of years, but it really took a turn last year."

On March 3, 2017, OCEARCH tagged a great white off Hilton Head, S.C. and named him Hilton. Last summer he made his way into the waters off Nova Scotia.

Fischer figured the more-than-3.5-metre-long shark would hang around for a bit, then head back to the Cape Cod area where mating is likely to take place. Instead Hilton spent last year's entire mating season in the Atlantic near Mahone Bay.

OCEARCH thought it might be a fluke, but as waters warmed in 2018, he headed back to Nova Scotia.

"Right now the data has put a beacon on Nova Scotia as a potential mating ground ... it's great to be coming to Nova Scotia and hoping to take another step in the research in just a year-and-a-half due to Hilton's tracks."

Fischer said great whites tend to spread out for most of the year, but if they find big mature males and big mature females congregating in one area, there's a good chance it's because they're mating.

"If we get a tag on a big mature female, in theory, 18 months later she could show us where the Canadian white sharks are giving birth," he said. "Then we could look after the nursery, which is where they're most vulnerable."

From what they've observed in other mating grounds, Fischer said the males usually show up first, then the females start to trickle in.

Researchers believe primary mating season is fall and early winter, but there's also a theory they might mate on rare occasions during chance encounters at other times of the year.

"The females can carry and hold sperm inside them for over a year, and then when they feel ready to have babies, they can let it go and self-inseminate," Fischer explained. "So why would they have that trait if they only mated in one place on a really fixed calendar?"

He said the most difficult part of their upcoming trip to Nova Scotia will be locating great whites, but if they can capture and tag just one, it could be a big leap forward in their research.

When OCEARCH arrives in Halifax, they're planning on opening their ship up to the public on Sept. 16 and 17. They've also scheduled a public presentation on the 18th before heading to Lunenburg on the 19th.

From Sept. 20 to mid-Oct. they'll be out looking for sharks, then they'll end up back in Halifax where they'll present an expedition report.

"We understand it's a privilege to come up and work in your waters. The research is really for you, all of your children and really all of ours on the Eastern seaboard because they move across the entire region ... we really want to make an effort to engage the entire community."