A Saint Mary's University archaeologist thinks it's possible there could still be findable remnants of a wooden palisade built in 1749 that linked together five forts
Nov 13, 2018 5:05 PM By: Meghan Groff 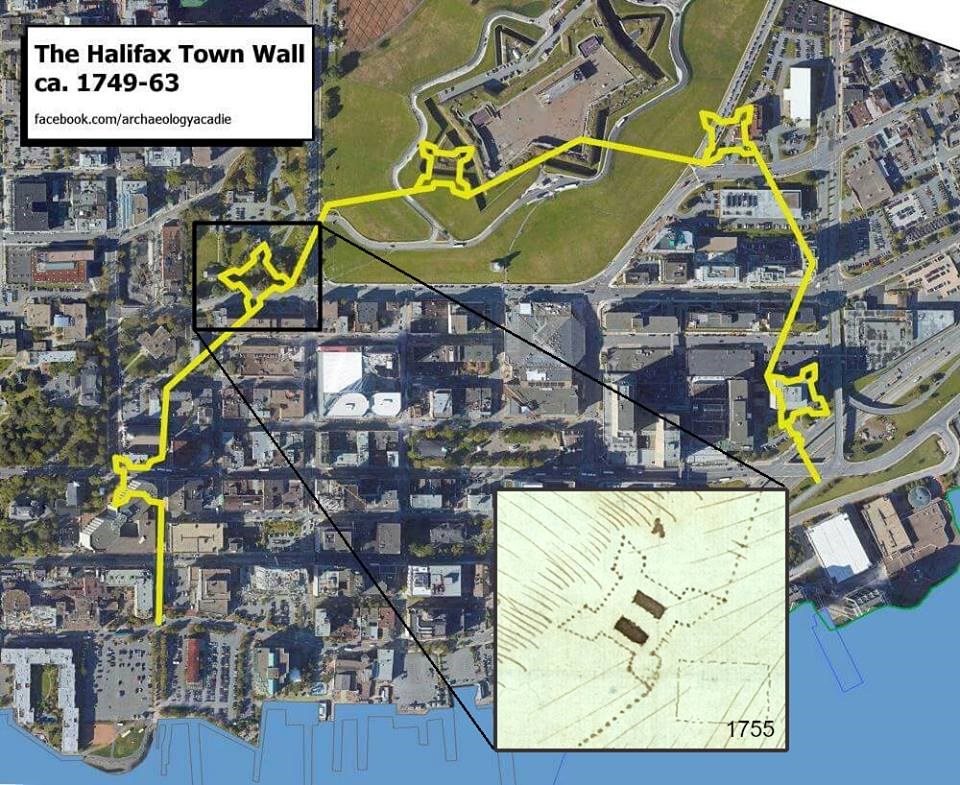 The old town wall and the perimeter fort located at what is now Royal Artillery Park. The inset map is a detail from a plan of the town drawn in 1755. (Map courtesy of Jonathan Fowler's Archaeology in Acadie Facebook page)

A Saint Mary's University archaeologist thinks it's possible there could still be findable remnants of Halifax's early defences, including a town wall built in 1749.

Dr. Jonathan Fowler told NEWS 95.7's The Rick Howe Show the wall was made of pickets, which are basically small tree trunks sunk into the ground.

"There was no Halifax Citadel in those days, it was just a hill," he explained. "So they chopped down the trees around it and they build these five little forts at intervals around the back side of the town in a crescent shape and then they connected the forts with a wooden wall. That was the first defensive ring of early Halifax."

With the amount of change and construction in the downtown, it's likely most of the wall is gone, but Fowler believes there could be some spots where traces remain.

"It's not as if we're likely to find much down there because much of the fortification was dismantled in its own day. It wasn't left as far as we know," he said. "It's going to be a challenging one but we're optimistic we might be able to find some hints of it at least."

Old maps, including one made by a French spy in 1755, helped narrow down approximate locations of the wall and forts.

The spy was captured from a French warship off the coast and spent most of that year as a prisoner in Halifax. Because of his high status, he was free to walk around.

"Little did anyone know he was scribbling down notes for a plan of attack, including a little map that he then tried to smuggle out of town when he was repatriated."

The map eventually ended up in London's National Archives and Fowler was able to get copies.

"It's one of the major clues we have as to what early Halifax looked like."

Fowler's team has wrapped up their first round of geophysical surveys at Royal Artillery Park on Sackville Street, where Cornwallis's Fort once stood.

They used technology, including ground penetrating radar, to survey the subterranean world.

"We've detected clear evidence of later buildings on the site, and we are still assessing the data for evidence of more elusive features," Fowler posted in his Archaeology in Acadie Facebook page.

'Trip of a lifetime:' SMU inviting public on Cuban archaeological dig (10 photos)
Oct 22, 2018 3:39 PM
Comments
We welcome your feedback and encourage you to share your thoughts. We ask that you be respectful of others and their points of view, refrain from personal attacks and stay on topic. To learn about our commenting policies and how we moderate, please read our Community Guidelines.