The program builds 'tiny homes' and offers numerous supports to those in need
Jan 17, 2019 4:08 PM By: Danielle McCreadie 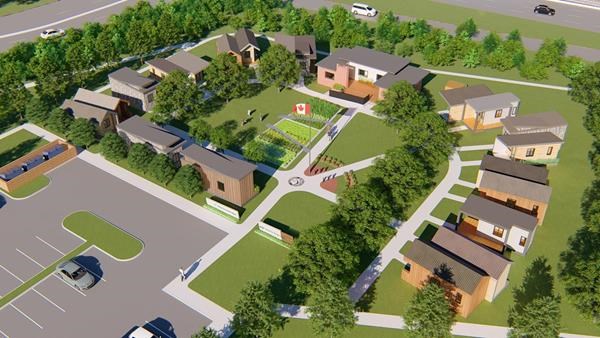 An artist’s rendering of what the final Homes For Heroes Calgary village will look like. The organization is already working on a similar project in Edmonton where there are another estimated 240 homeless veterans.

A non-profit organization wants to help homeless veterans across Canada get off the streets by providing unique communities for them to live in.

The Homes for Heroes program will provide homes, a community of peers, and a support structure to help military veterans re-integrate into civilian life.

The "tiny home communities" are an assortment of 300 square foot homes built in a barrack-style layout, with a resource and community centre in the middle.

The veterans are also paired with a case worker through Veterans Affairs who will work with them on their specific needs.

Co-founder and president David Howard says one of the largest issues facing veterans across the country is homelessness and difficulty transitioning, largely in part to PTSD.

He's been involved in helping veterans across the country for the last ten years.

"The issue is costing cities a lot of money," said Howard. "An average person experiencing homelessness is costing a city anywhere from $60 to 80 thousand, so if we look at a 20 person village, we're able to do a substantial savings cost to the city, and at the same time make sure that we're supporting those individuals who have stood on guard for our country."

The government of Canada estimates there are around 2,600 homeless veterans in the country.

"We think those numbers are more in line with about 5000 across Canada because you find that there's a lot of vets that don't self-identify," said Howard. "its difficult to get a proper handle on it but it is a problem that's increasing and there's really not a solution toward it."

Howard explains the program is not a permanent housing solution: its goal is to help get veterans back on their feet and give them the tools to succeed.

Currently Home for Heroes has one facility in development in Calgary with veterans slated to move in this July. They are also starting work in Edmonton this year.

Howard said Halifax is of interest to them due to its historic ties to the military and high numbers of homelessness.

"Halifax is on our map," said Howard in an interview with Halifax Today. "It's a place that we think we can really come to a solution and solve this issue."

Councillor Steve Adams asked city staff to look into the feasibility of the program during a Jan. 15 council meeting. His motion passed unanimously.

"The only assistance that is necessary from HRM is to find an appropriate zoning to allow this, everything else is paid for by this organization," he said during the meeting.

The average cost to build a facility is around $3 million says Howard, with about $500,000 of that going into a trust fund for that development.

Howard also says there is a small rent that's paid by the veterans, which is typically covered by support services accessed through Veteran Affairs.

"We are a foundation, a charity so we look for corporations and individuals and other non-profits and grants to build the village. What we look to the municipalities to do is to help us secure land within their district," he explained.

This can either be done through a donation of public lands or through a partnership with a private developer, he says.

Adams also said during council he has a developer who is prepared to contribute land contingent on getting the necessary zoning.

He hopes the program can start building by 2020.