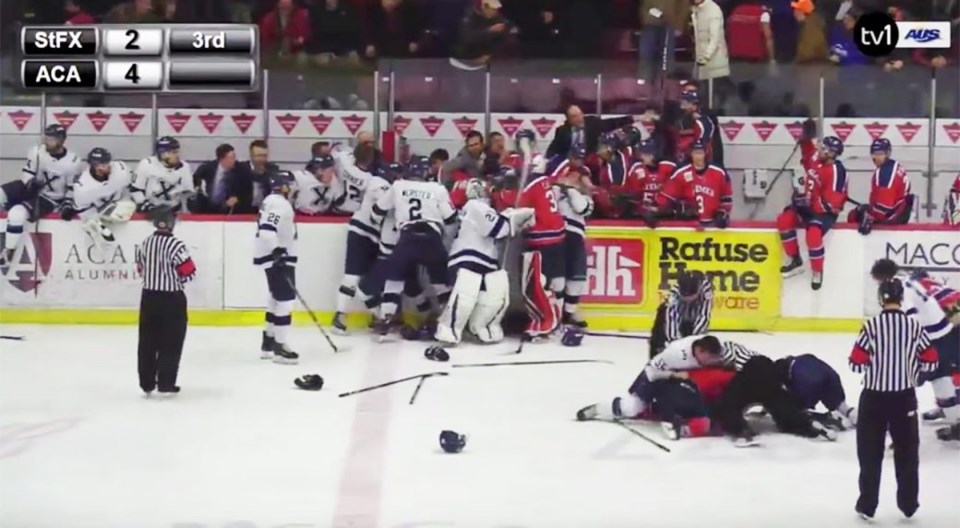 An unruly hockey brawl between the St. Francis Xavier (SFX) X-Men and the Acadia Axemen during an AUS game last week has some in the hockey community concerned.

Tim Skuce, an assistant professor in the faculty of education at Brandon University in Winnipeg used to play for SFX in the 1980's, and recalls a similar fight breaking out during one of his games.

Skuce is now researching how the culture within hockey influences male athletes' conceptions of masculinity.

He found that hockey is a breeding ground for toxic hyper-masculinity, and promotes unhealthy qualities like aggression, anger, and even homophobia.

"These things are shaped to the point I think they become so  obvious that we stop questioning what they are," he said in an interview with NEWS 95.7's Todd Veinotte.

"Something I heard a lot of, is that people say 'well, it's boys being boys,' and 'its' part of the DNA,' which I'd like to challenge that."

Through his research, Skuce has talked to many current and former NHL players. He says some of the men he spoke to said they were often uncomfortable being in 'enforcer' roles or being asked to fight by their coaches.

"Very few men talked about really enjoying the overly physical nature of the game, and all the men that I interviewed mentioned being fearful of being on the ice and being threatened by other men on the ice," he said.

He says hockey culture puts a lot of expectations on its players to be good fighters, and if they don't fight, they aren't doing their job well.

"I really think some of the trauma that they start to talk about, of living in fear on the ice of other men, is quite serious," he said. "The way that men internalize this was frightening to me."

He also notes that masculinity in hockey is portrayed differently than in other sports. Fighting in hockey is encouraged, and seen as a part of the game. Skuce says on his SFX football team, fighting was seen as "unacceptable."

Skuce says toxic masculinity is a systemic issue, and doesn't just apply to the world of hockey. It extends to its fans, its broadcasters and beyond.

"I think if we look at broader aspects of society we will also see these kinds of traits that we seem to covet: being aggressive, being assertive, etc., are not just bound within the arena of hockey," he said.

While fighting in the NHL and in junior leagues has gone down in recent years, Skuce says instances like the AUS brawl shows that more work needs to be done in changing the game to be not only safer, but less toxic too.

"There's other ways that men can be men that does not advocate the ultimate stand of punching or physically fighting one another."