The team and logo were officially unveiled Friday afternoon at an announcement at the Nova Centre
May 25, 2018 8:19 PM By: Andrew Pinsent

The new Halifax Wanderers FC logo is pictured after the team was officially unveiled at an announcement May 25, 2018. (Canadian Premier League)

HALIFAX – Haligonians will be able to take in ‘the beautiful game’ at a professional level starting in 2019 after Halifax’s Canadian Premier League franchise was unveiled Friday.

Halifax Wanderers FC will begin play next spring along with the new CPL, which is expected to field between eight and ten teams for its inaugural season.

The new club will play in a temporary or ‘pop-up’ stadium set up at The Wanderers Grounds.

Derek Martin, president of Sports and Entertainment Atlantic, the group behind the successful team bid, said Friday’s announcement was a long time coming and the result of lots of hard work and determination by many.

“We worked through a lot of interesting twists and turns throughout this process…but this league needed to be coast-to-coast and it needed Halifax,” Martin told a few hundred supporters who gathered for the announcement at the Nova Centre. “And we’re here.” 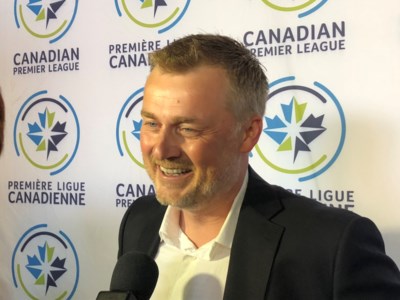 “Years ago, when we had this dream to bring in professional sport and revitalize the Wanderers Grounds, I don’t think I could have imagined a reception as great as this,” Martin said in thanking supporters, which included a number of youth soccer coaches, parents and players.

CPL Commissioner David Clanachan said Halifax was an important part of the coast-to-coast concept and “puts it on the same stage as some of the other sports centres in the country.”

The league will be the first of its kind in Canada and expected to act as a next step or ‘pathway’ for emerging Canadian soccer talent.

Clanachan said youth talent was a large inspiration behind the league, as he himself played when he was younger but hit a point where there was nowhere to go “because this kind of league didn’t exist.”

He said it will offer kids a chance to “fulfill their dreams of being able to go on to something bigger and better when they get past the age of 16.”

Mayor Mike Savage was on hand for the announcement and said the league would have a positive economic impact for HRM and provide entertainment, but also gives something Halifax and Canada has never had: a training ground for young soccer talent to graduate or aspire to.

“The whole league will provide a pathway for kids who are really good and talented who want to move on,” Savage said.

“Our national mens team hasn’t done well the last number of years and one of the reasons I think is that we haven’t had a really good breeding ground for soccer players.” he said.

Mayor Mike Savage greeting soccer supporters at the Nova Centre, where Halifax’s Canadian Premier League franchise is about to be officially unveiled. pic.twitter.com/Kfd3cbW6zY

On top of the club announcement, the formation of a new fan group was announced Friday entitled the ‘1882 Privateers,’ a nod to the historic Wanderers name in HRM that has its roots in the late 19th century.

James Covey is with the group as the team’s self-appointed ‘number one fan' and said it was fantastic to see the support at the announcement and at a recent meeting for supporters.

“Even when we had an information meeting early on, March of last year, there were 100 people that turned out for that,” Covey said, who added Soccer Nova Scotia was a huge part of drumming up support.

“I’m so pumped right and this just made it real,” Covey said.

Covey also played a role in the development of the team name and was happy with the final selection.

“We were ready to live with whatever the brain-trust came up with…we’re just happy to have a team,” he said.

The team’s official colours are ‘Aqua Ocean’, ‘Harbour Blue’ and ‘Naval Grey,’ meant to be a nod to the ocean and the region’s ‘steel-toned skies.’

The logo, meanwhile, combines the eight-point star of the Halifax Citadel along with the Macdonald Bridge, in what is supposed to be a ‘focal point of uniting Halifax and Dartmouth.’

The crest also passes the test for Covey.

“I think the modified eight-point Citadel shape is going to be really recognizable at any size and be a really identifiable look for us,” he said.