A 13-year-old Halifax girl is hoping a video she posted to Twitter will get the attention of a former U.S. president
Oct 28, 2019 3:30 PM By: Meghan Groff 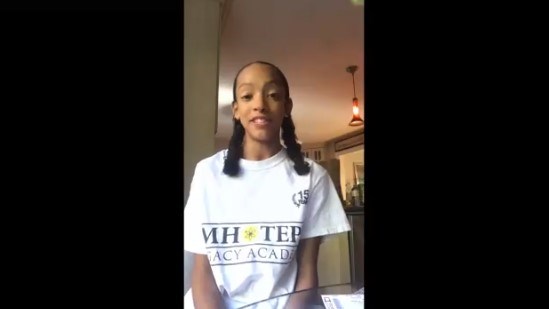 A 13-year-old Halifax girl is hoping a video she posted to Twitter (see below) will get the attention of a former U.S. president.

In the video, Eve Wedderburn invites Barack Obama on a tour of the after-school program she attends, which encourages African Nova Scotian youth to enroll in science, technology, engineering and mathematics (STEM) programs.

Wedderburn, a Grade 9 student at Oxford Jr. High, is entering her third year at Imhotep's Legacy Academy, which is affiliated with Dalhousie University.

"I can show you around and tell you about all the amazing things Imhotep has done for African Nova Scotian youth," she says in the video.

Wedderburn was a guest on NEWS 95.7's The Sheldon MacLeod Show Monday.

She told the talk show host her family was fortunate enough to get tickets to hear Obama speak at the Scotiabank Centre on Nov. 13.

"I was very excited, I couldn't even put it into words," she said. "After that I was kind of thinking it would be really cool to meet him and I thought of what could I do."

"My mom and I talked about it and thought we could make a video, put it on social media and try to get people to spread the word so he could see it."

The aspiring orthodontist would love to show Obama why she thinks Imhotep is "the best program in the world."

"I'm very proud of the community and how Imhotep helps African Nova Scotian youth because sometimes we don't get the support we need and my academics have shot up since I joined Imhotep," she told MacLeod. "I thank them continuously for that."

In addition to the tour, Wedderburn said she'd love to get his advice on how she can make an impact on the world.

When asked what question she'd like to ask Obama, she said, "What can I do, as a youth, to get ahead and be able to make the world a better place?"

"I'm waiting," Wedderburn said. "I'm trying to be as patient as possible. I'm excited and I have a lot of hope."

Hey! @BarackObama I have a very special invitation for you all the way from Halifax, Nova Scotia! Check it out! @ObamaFoundation @MichelleObama @imhoteplegacy @DalDentistry @DalScience @BarackObama pic.twitter.com/N5fxmqsIM5