Jake Boudreau made a full arm prosthetic for a woman in Sao Paulo; he's now started a second project for a 6-year-old girl in Costa Rica
May 24, 2018 7:12 AM By: Meghan Groff 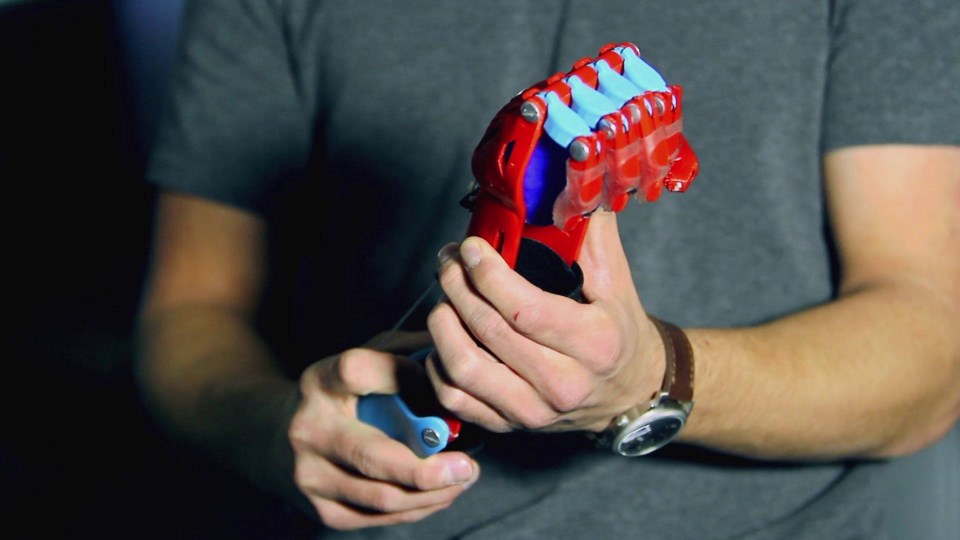 A photo of prosthetic limb created by Jake Boudreau is shown here in a photo from Kindness 3D's Facebook page. (Facebook)

A YouTube video has inspired a Halifax man to build an artificial limb for a Brazilian woman with his 3D printer.

Jake Boudreau watched the video by e-NABLE -- a group of people aiming to help those in need of prosthetic hands and arms -- in November.

He soon launched Kindness3D, a non-profit e-NABLE chapter, so he could get involved in his spare time.

"What we do is build prosthetic limbs using our 3D printers," Boudreau told NEWS 95.7's The Sheldon MacLeod Show. "We scale them to recipients and we ship them around the world."

Recipients are able to go online through the e-NABLE community, outline what style of device they need and submit their measurements.

After creating it in his bedroom, three weeks ago Boudreau shipped his first device -- a full arm prosthetic --- to a woman in Sao Paulo who had lost her hand.

"It's actually rigged up with this plastic wire ... it attached to the fingertip, runs along the arm and it's tied up to a tension block on the bicep," he explained. "So when she makes this motion with her elbow, the fingers close so she's got quite a good grasping motion now."

Boudreau launched a GoFundMe page to raise money to help with the expenses.

He's been able to find a sponsor to donate some of the needed materials, but says he saw a spike in his power bills when he was working on the first prosthesis.

He's now started on his second project which will be given to a 6-year-old girl in Costa Rica.

"Right now I'm looking to help people abroad. I'm really looking for people who really have no access," he said. "A lot of these people are in impoverished countries, they deserve this technology."

"We take great pride in making the best quality products we can and we ship them around the world for free."

"It's an open source prosthesis design, so anybody is free to download, edit and share the design."

He's hoping to enlist some engineering students from Dalhousie and design students from NSCAD to improve the prosthetic prototypes.

Bourdreau will be sharing his story at Aubcon this weekend, a sci-fi convention being held at Auburn Drive High School.