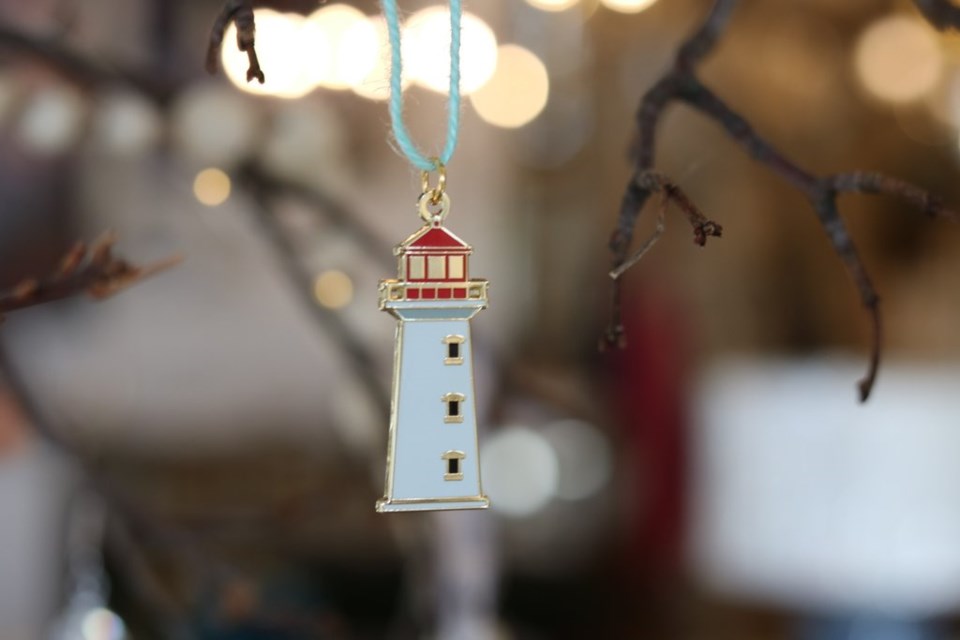 This lighthouse ornament is being sold as part of a fundraising campaign to sponsor a family of Syrian refugees to come to Halifax. (Image via Halifax Paper Hearts)

"When the Syrian war started in the news, I was really touched by what was happening there and I wanted to help. And I wanted to find a way to help that wasn't just financial," she tells NEWS 95.7.

Nantes was paired up with a woman named Muna, and they began meeting regularly for English lessons.

"I would go to her house once a week to teach English, and that kind of just forged into a really great friendship. I really got to know her and her family," says Nantes.

After meeting her husband Bassam and their seven children, Nantes became quick friends with the entire family.

"They love it, they think that people are great here, the kids have settled in so well in school and they're really liking their time here," she adds.

Nantes says she wanted to do even more to help the family of nine.

"They've been in Halifax here for three years and wanted to help bring some of their family over so they could have some more family here in Halifax with them," she explains.

Now, Nantes is in the process of raising the $32,000 minimum to bring Bassam's brother and his family to Halifax in 2020.

"It's for their first year of settlement here," she says. "As private sponsors, they arrive here and we're responsible for supporting them financially for their first year. So all their housing, clothes, food, everything that has to do with living here in Halifax."

All the money needs to be raised by March. But thankfully, Nantes isn't doing the work completely alone.

Nantes' long-time friend Stefanie MacDonald has joined the effort by way of her gift and greeting card business Halifax Paper Hearts. She says she was inspired by how her friend was a "light for others" in the community.

"I wanted to use what I know how to do -- which is make things -- to help to bring awareness to what it was that Heather was doing," explains MacDonald.

So Halifax Paper Hearts created and sold 250 ornaments this holiday season, appropriately shaped like a lighthouse.

"We called the campaign Be The Light, and it really was inspired by Heather's efforts over the last two and a half years, and her purpose now going forward," says MacDonald.

The entire proceeds from the $25 ornament sales went towards Nantes' funding campaign, a total of $6,250.

Nantes says she is still about $4,000 short from the goal, and that chances are the family will need even more to settle in properly.

"Cost of living is high, rent is high here in Halifax, groceries, everything," she explains. "So we hope that we surpass that definitely, and we'll continue to fundraise leading into when the family arrives."

Nantes says above everything, she is happy to be reuniting her Syrian friends with their relatives, who have been living in Jordan since the Syrian war broke out.

"When they were in Syria they actually lived next door to the family that are coming. They lived next door for their whole lives, then they've been separated for the past eight years now," she says. "But I really wanted to bring them some sense of community and have their family here so that they can settle and have their kids reunite here in Halifax and grow up as Haligonians."