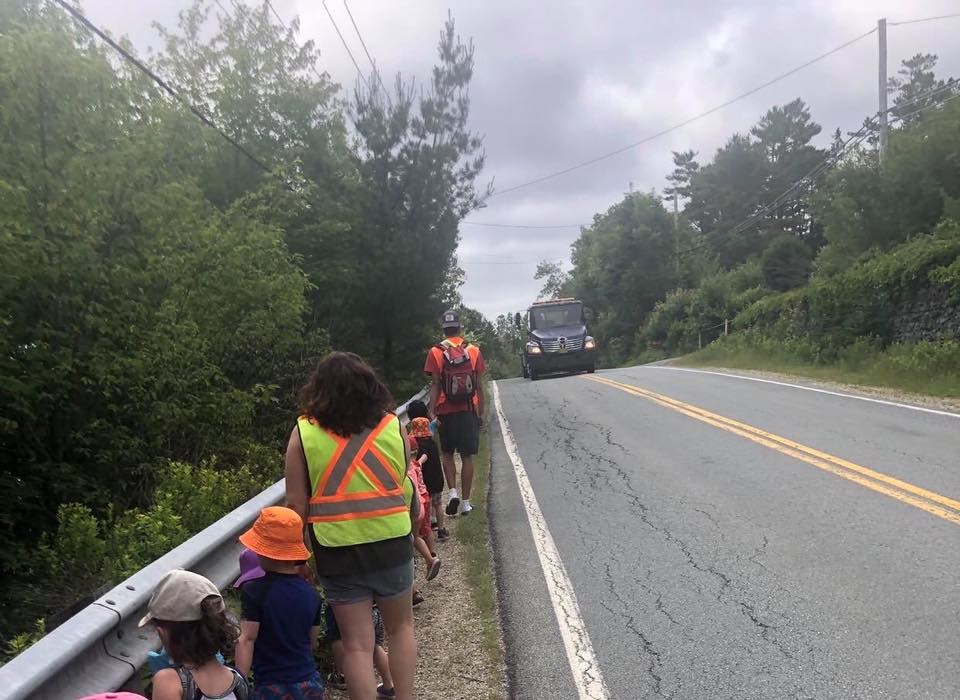 Situated between Tantallon and Chester, the community of Hubbards only has about 400 year-round residents.

But in the summer, businesses, visitors and tourists bring life to the community.  “It’s a great location where you’re still not too far from the city but you have that beautiful, picturesque scenery that we all love in Nova Scotia and access to water at every point. And so it’s the ideal location.” says resident Melanie McIvor.

McIvor says the community is a great place for young families and has just about everything you’d need.

“There’s everything you need in Hubbards, except a sidewalk. So we might as well take is up that next step and get to having that perfect little community,” she tells NEWS 95.7’s The Sheldon McLeod Show.

In early June, residents began a Facebook group called the Hubbards Streetscape Project with the end goal of getting a sidewalk in the community.

“We as a community have a really good idea of what we would like to see, but we have no formal plan yet,” says McIvor, who represents the Halifax side of the group.

Because the community is uniquely situated on the dividing line between the Municipality of Chester and Halifax Regional Municipality, the two governments have to work together on the project.

Matthew Morash is the representative for the Chester side of things. “The county line between the Chester Municipality and the Halifax Regional Municipality almost falls smack dab straight through the community,” he says.

But that hasn’t stopped the group from approaching each municipality to meet about the sidewalk, getting support from both HRM Councillor Matt Whitman and Chester Councillor Floyd Shatford.

“It was very nice to sit down in that meeting with some of the representatives from the municipalities who were saying ‘You know what, let’s throw apart this county line, let’s take apart our differences and let’s take this project forward as one Hubbards,” says Morash.

Hubbards is also taking cues from communities that have done this before, like East Preston and Sheet Harbour. Morash says they are following recommendations from the Federation of Nova Scotia Municipalities report the Nova Scotia Main Streets Initiative to designate a “main street.”

For now, the realization of the highway is still far off, but Morash hopes to see it completed before the twinning of the 103 highway draws more tourists than ever before.

“Honestly we’re going to be smashed and hit with development due to the twinning of the highway and we want to be ready for that. And development is coming. My heart would be broken if Hubbards was turned into just a big parking lot,” he says.

Aside from keeping the town tourist-friendly, McIvor says she also wants to keep the community safe as her children grow up. Currently, even pre-school groups are forced to walk along the edge of a road with cars whizzing by.

“You can see on our Facebook page that the amount of people who have run-ins it’s just mind-blowing, and we don’t want it to get to the point where someone gets injured,” she says.

McIvor says the sidewalk process won’t be cheap, but it will be worth it and the group is willing to do the work to make it happen.

“It will probably be around $30 to $50 thousand dollars,” she says. “So we are prepared to do what we need to do to get that money secured for ourselves, whether it be grants, other applications or community engagement through fundraising and whatnot.”

For Morash it’s a combination of beautifying the community, but also ensuring it’s a safe place to live.

“We don’t want to be a thoroughfare, we want to be a stopping place like a Mahone Bay, like a Chester,” he says. “And honestly our residents’ safety depends on it.”