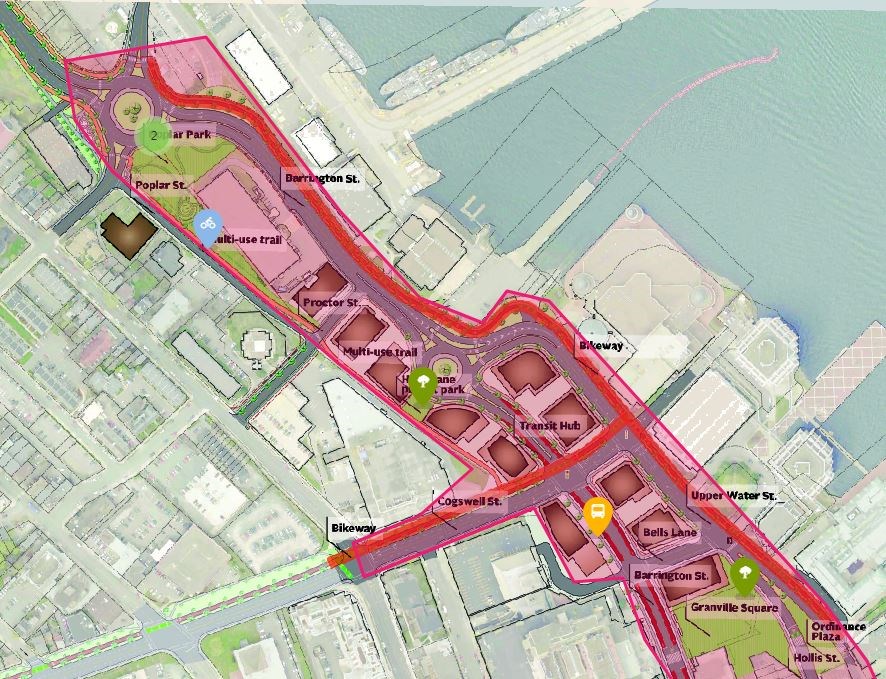 Halifax Regional Council approved to budget for $600,000 worth of flood mitigation efforts as part of the Cogswell District Redevelopment plan today.

Staff say a section of Upper Water Street near the wastewater treatment plant and Karlson's Wharf, sees significant flooding every year during rainfall and coastal flooding events. The same goes for a stretch near Casino Nova Scotia, due to the lack of overland drainage back into the harbour.

The issue is only expected to get worse, staff said in a recent report, as climate change brings about more flooding events, including more intense rainfall and higher tides.

As the report explains, Upper Water Street acts as an entrance to downtown, as well as an emergency evacuation route, and was identified as one of the top ten risk areas in the National Disaster Mitigation Program (NDMP) Flood Assessment report (WSP, 2018).

Flooding and drainage problems is one of the largest issues Halifax currently faces in areas that do not have a formal stormwater system like Upper Water Street, and its proximity to the Halifax Harbour complicates things.

Current standards require that storm and sanitary flows be separated and that an overland storm drainage path be identified to accommodate major storm events. Upper Water Street has a combined (sanitary and storm) sewer and does not have an overland drainage path.

The elevation of Upper Water Street is also an issue. High tides and storm surges make it difficult to drain the street, and can cause surcharging of the sewer system, explained the report.

The solution to the drainage problem around Karlson's Wharf is to raise the elevation of Barrington Street by about a metre to prevent future flooding of the street. This would place the street at an elevation of over 3.8 m.

This will ensure that "all new development (on the west side of the street) will be above the 3.8 metre elevation, and redevelopment to the east will be accommodated by modification of the street, if and when the Casino and Purdys Wharf sites are redeveloped," said the staff report.

Both projects are estimated to cost $300,000 and will include re-paving, curbing, replacement of gates and fencing, and a new storm sewer and drainage systems (at Karlson's Wharf only).

Funding for this work will be considered as part of the 2020/21 capital budgeting process.