Four more NSLCs in the Halifax area will sell cannabis 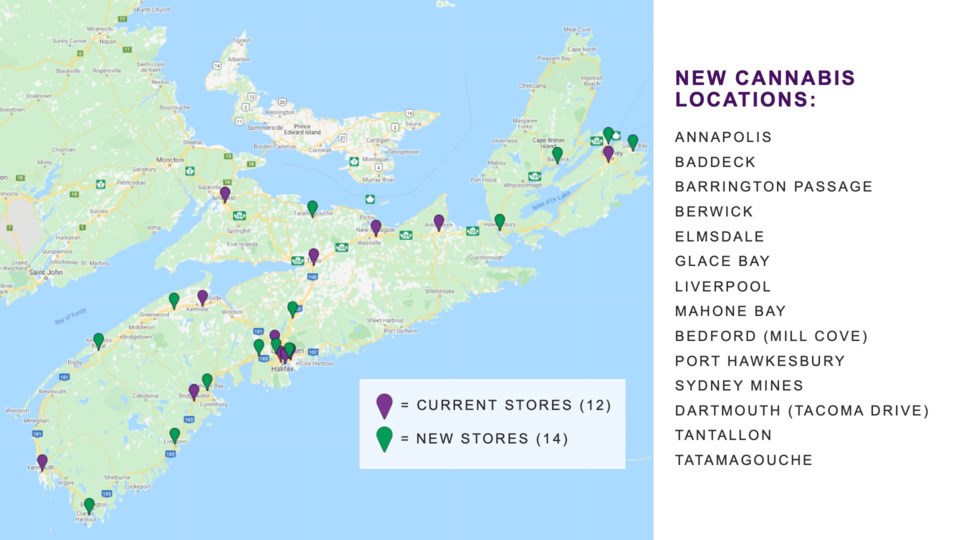 The province of Nova Scotia is more than doubling the number of NSLC's that will be selling cannabis in the province.

Finance and Treasury Board Minister Karen Casey has announced 14 additional stores will be added, which will bring the total number of outlets in the province to 26.

The NSLC's in Bedford (Mill Cove), Dartmouth (Tacoma Drive), Elmsdale and Tantallon are among the new locations.

Tantallon will be the largest, with a 1,000 square foot store.

There are currently four NSLC stores selling pot in the Halifax area; on Portland St. in Dartmouth, Joseph Howe Dr. in Halifax, Downsview Plaza in Lower Sackville and the stand-alone store in the south end on Clyde Street.

"We have said all along that we will move slowly and safely and need to be socially responsible and we are ready to take the next step, said Casey in a news release.

"We have recognized that online sales so far have not addressed areas of the province where there was a gap and it is apparent that new customers want the in-store experience. We feel that opening more stores is the most effective way to deal with the illicit market, protect our children and keep communities safe."

Recent research by the NSLC showed that one of the reasons customers are buying from the illicit market is because there is no cannabis store in their area.

Casey said renovations on the newly announced locations will begin as soon as possible.

Some are expected to be up and running by fall, with the rest completed by the end of the next fiscal year.

A request for proposals is expected to be issued in April.