Kardeisha Provo, DeRico Symonds, Eric Smith and Huwaida Medani were nominated by their peers for work in the field of human rights, social justice and advocacy
Dec 10, 2018 5:24 PM By: Canadian Press 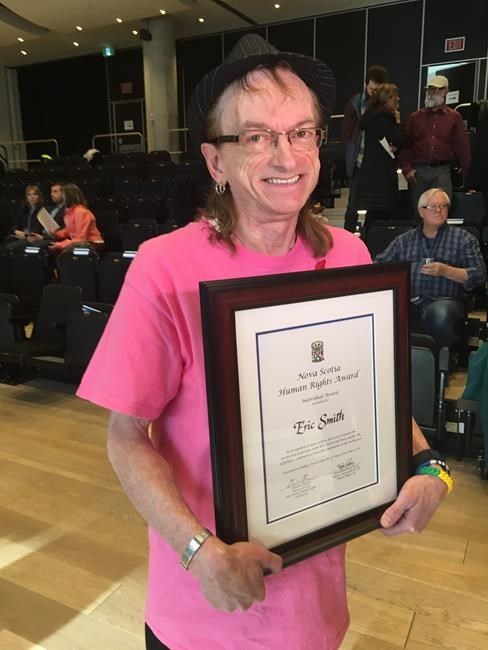 HALIFAX — A former Nova Scotia school teacher who spent decades advocating for the rights of people with HIV accepted a provincial human rights award Monday, while cautioning against the rise of white nationalism.

Eric Smith was among six individuals and groups recognized by the Nova Scotia Human Rights Commission at the Halifax ceremony.

Smith, who recently turned 61, came to national attention in 1987 when he was forced out of his elementary school teaching job on Cape Sable Island, N.S., after local parents found out he had tested positive for HIV.

He went on to become a prominent advocate for the rights of gay and lesbian Canadians, to help lead the Nova Scotia Persons with AIDS Coalition, and to serve on the Nova Scotia Task Force on AIDS — which produced recommendations that influenced a generation of politicians and policy makers.

"It was truly inspiring to work with so many people with AIDS who fought to die with dignity. Many of them had been disowned by their families, so it was truly amazing to watch these people cling to their humanity," he said during his acceptance speech.

He recalled how he'd lost 550 friends and his partner to the illness, and said he hoped his human rights work has honoured their memory.

Smith also said he recognizes there is much work left to do.

More than 60,000 Canadians are living with HIV and there are still about 2,000 new cases of HIV in Canada each year. Meanwhile, fundraising for AIDS service organizations has slowed and global funding for HIV research and development has declined.

Smith urged the expansion of a free PrEP program, which refers to the pre-exposure prophylaxis pills men can take daily to avoid the transmission of the virus through sex.

He also said he will continue to push governments for the establishment of safe injection sites, to help prevent the spread of HIV through needles

"Let's ...advocate safe working conditions for sex workers. Let's focus our resources against those who are forcing people into prostitution," he said during his acceptance speech.

Smith said while the LGBTQ communities have made major strides, people who fight for human rights should not be complacent.

He noted the rise of race-based nationalism in North America, suggesting if it gains political leverage in Canada it can roll back gains made in protecting the guarantees of human rights based on sexual orientation, race and gender.

"The biggest threat facing minority groups today is the white nationalist movement," Smith told those gathered at the ceremony.

"These groups want to roll back all the social gains we've made in the past 50 years ... Being Queer would become illegal again, women would lose control of their reproductive rights ... and diversity would become a four-letter word."

Other recipients of awards emphasized the importance of countering false stereotypes of racial communities.

Kardeisha Provo, 18, received the youth award for her creation of Youtube videos that offer glimpses of day-to-day life in the predominantly black community of North Preston, showcasing some of the successful and hopeful moments in the lives of its residents.

"The land is beautiful, the people are beautiful and the people love very hard and unconditionally and they show that love to everyone that enters the community ... That's what you see in my videos," the Ryerson University student said in an interview after receiving her award.

Two awards were given to organizations, including one to the Inverness Development Association for making beach facilities and the boardwalk in the Cape Breton community accessible to people with disabilities.

The second organization award was given to the South End Environmental Injustice Society for its work addressing environmental racism and promoting the health of the black community in Shelburne's south end.

Louise Delisle, the 67-year-old chairwoman of the group, spent years fighting for the closure of a local landfill that was located near the predominantly black community in the 1940s.

She said she's now battling to obtain cleaner water for the area, and her group is working with partners to examine the long-term health fallout from being located near the garbage disposal area.

"I'm so excited and so thankful that people realize how important this is. This award belongs to all those people who have died of cancer and are sick in our community. …This award is for people who never had a voice," she said in an interview.

The awards given out on International Human Rights Day also acknowledged the work of DeRico Symonds, an advocate for youth and co-founder of a social enterprise employing young people in Halifax's north end.

The Nova Scotia Human Rights Commission presented a second individual award to Huwaida Medani, an educator and inclusion consultant based in Halifax.