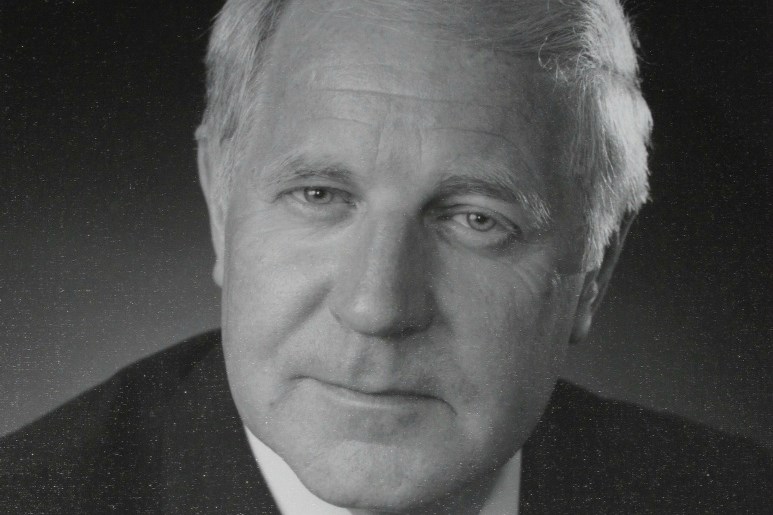 Flags at Province House are at half-mast in honour of John Buchanan.

The former premier and senator died Thursday at the age of 88.

In that interview, he said improving health care in Nova Scotia was one of his biggest accomplishments as premier.

"I'm very proud to say there are 10 hospitals in Nova Scotia that we built ... those hospitals were badly needed and no big hospitals have been built since," he said.

A Halifax lawyer before entering politics, Buchanan was known for his outgoing personality and folksy manner.

In last December's radio interview, Howe fondly remembered how Buchanan and his wife, Mavis, would stand at the Armdale Rotary with a 'thank you' sign after each election win.

Buchanan said a friend of his floated the idea at his first victory party.

"Jerry said, 'Will you be around at 6 in the morning?' ... I said 'That's a novel idea, but first, it's too early in the morning, and two, I don't have a sign,' he said 'Don't you worry about that,'" Buchanan told Howe. "At 6 o'clock in the morning I get up to go to the bathroom, I look out and there was his little half-ton truck."

"He had the sign all painted in PC colours in the back of the truck ... we stood at the side of the road, waved to people and it was a success."

Buchanan's term in office was marred by allegations of corruption and kickbacks, which he denied.

He resigned in the midst of an RCMP investigation in 1990 and was appointed to the Senate by then-prime minister Brian Mulroney.

Following his departure, Roger Bacon was named interim leader of the party, serving as premier for over 5 months until Donald Cameron was picked as the new PC leader.

Bacon told NEWS 95.7's The Sheldon MacLeod Show it was a privilege to serve under Buchanan's leadership.

"He loved the campaigns, he loved to meet people and he loved to talk with them and find out all about their problems. He was a good listener too," he said. "He was one-of-a-kind as far as I'm concerned."

In a news release, Progressive Conservative leader Tim Houston said Buchanan's ability to connect with Nova Scotians is his legacy.

"I will remember Premier Buchanan as a wonderful storyteller and a man whose genuine interest in people meant he never forgot a name or a face," Houston said.

Members of the House of Assembly paid tribute to Buchanan Friday.

"He's been often referred to as, probably the best grassroots politician this province has ever seen," McNeil said.

"I don't think anyone who has sat in this House has been a truer champion of the values of this province and believing in this province."

In a news release McNeil said his thoughts are with Buchanan's wife Mavis, their five children and his loved ones.

You can listen to Rick Howe's interview with John Buchanan here: