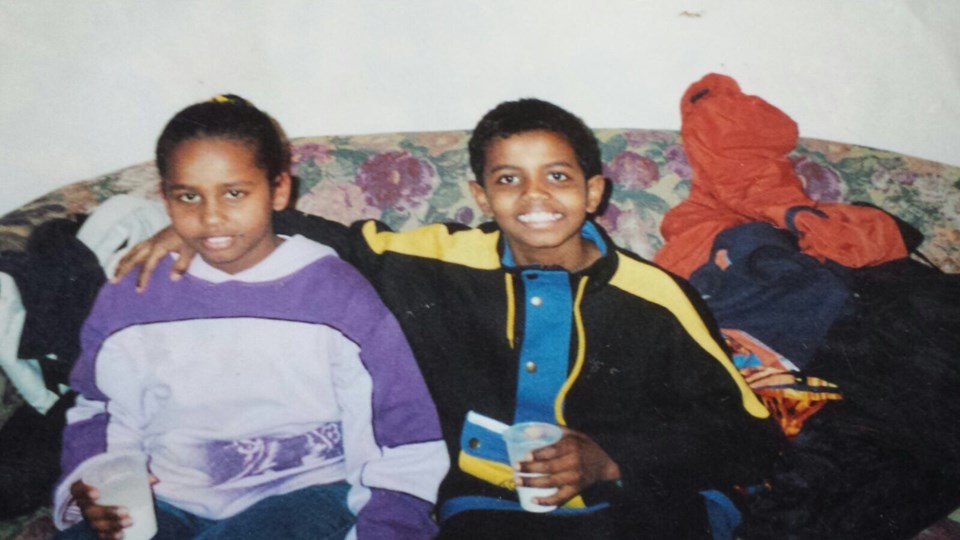 Abdoul Abdi, right, was brought to Canada as a 6-year-old and is now facing deportation to a country he hasn't seen for 20 years. CITYNEWS

A 23-year-old man is facing deportation to a country he hasn’t seen since he was 3 years old.

The family of Abdoul Abdi says Canada is the only home he knows, but a failure by children’s services to apply for his Canadian citizenship could see him being sent back to Somalia or Saudi Arabia.

“He doesn’t deserve to be deported somewhere he has no knowledge of, no family ties,” says Abdi’s Aunt, Asha Ali. She brought Abdi and his sister to Canada when he was just 6 years old, fleeing civil war in Somalia. His mother — Ali’s sister — passed away before their applications were approved.

Nearly a year after landing, the two children were taken by social services for reasons unclear to his aunt — a newcomer at the time who spoke little English.

“The only thing they told us is they’re helping us,” she recounts. “They moved one place to another, foster homes to group homes.”

Abdi would spend nearly a decade in foster care in Halifax, separated from his sister at 9 years old. Ali says she tried for years to get them back into her care, hearing horror stories about her nephew’s treatment in the system.

“Abduol ran away a lot of places they put him because he couldn’t take the abuse,” she says.

At 17, Abdi was arrested during an altercation and charged with aggravated assault. Now 23, he has served out a five year sentence, and was set to be released January 4th. Coming of age behind bars means he is no longer a ward of the state, and could finally be reunited with his aunt in Toronto — the woman who considers herself his mother.

“He was happy to come to Toronto, have an education, get his GED, have a job, be there for his daughter,” she says of his planned release.

But instead, he was met by Canadian border services agents who said they would be deporting Abdi because his criminal record now made him inadmissible to Canada.

“He’s only a permanent resident, not a citizen,” explains Abdi’s lawyer Benjamin Perryman. “But he’s only a resident because children’s services failed to apply for citizenship on his behalf when he was a child in their care.”

While it’s unclear why children’s services never submitted the documents, Perryman says Nova Scotia does not have any policies when it comes to non-citizen children in their care.

It’s frustrating news for Ali who says she spent years being told she wasn’t allowed to apply for her niece and nephew’s citizenship.

“When I applied for my citizenship, I applied for them too,” she says. “They said, ‘Oh, we’re the legal guardian. They are in our care. We are the state who have the kids in care and you cannot act as the guardian of these kids.’ ”

She believes her nephew is being robbed of his chance to start his life over, this time with family support.

“He lost all his childhood, and I’m afraid he’s going to lose his adulthood too.”

CityNews reached out to Minister of Public Safety Ralph Goodale and Minister of Immigration Ahmed Hussen’s office. Both declined to comment on the case, directing us to the Canadian Border Services Agency. CBSA did not respond to CityNews before publication.