Flooding in Halifax shouldn't be a surprise, says archaeologist

Historical maps of the city show it was built over dozens of wetlands, bogs and streams
Oct 10, 2020 4:15 PM By: Chris Stoodley 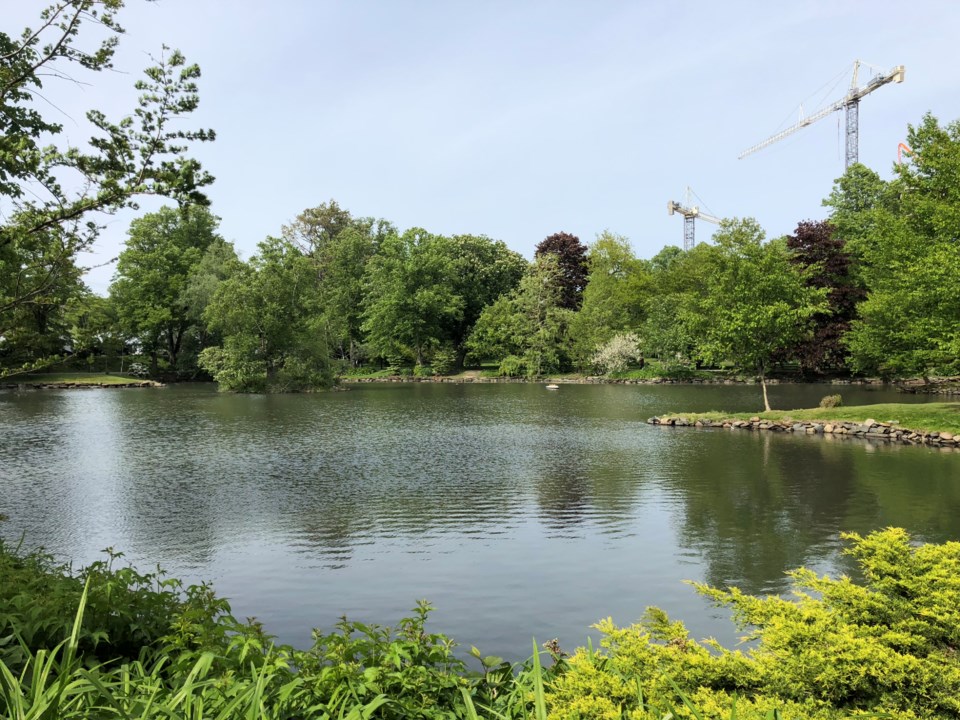 Griffin's Pond in the Halifax Public Gardens is one of the few remaining bodies of water above ground on Halifax's peninsula (Meghan Groff/HalifaxToday.ca)

On Oct. 5, flooding trapped at least one car on the south end of Barrington Street in downtown Halifax.

Probably best to just move your vehicles out of this area during heavy rain. (South end of Barrington St) #halifax

“These have basically all been filled in and covered up, and the rivers have been stuffed in pipes,” he says. “So, out of sight, out of mind but Mother Nature is still working in the background. And particularly in the era of climate change when we get these supercharged rainfall events, that water has to go somewhere.”

In the 18th century, two British military survey maps of Halifax show details of wetlands and watercourses. The first map was drafted by Joseph Frederick Wallet Des Barres in 1779; the second was drafted by Charles Blaskowitz in 1784.

In 2012, Mike Reid analyzed these maps as part of his master’s degree in marine affairs from Dalhousie University.

In his thesis, he says both maps record over 82 hectares of wetlands — around 18 per cent of Halifax’s peninsula. On top of that, there were 78 kilometres of streams flowing across the peninsula into the Northwest Arm of Halifax’s harbour.

One of those streams was a river called the Fresh Water Brook. It ran throughout the peninsula, starting near Young Street in the north end, running through the Halifax Common, then through the Halifax Public Gardens and ending near the bottom of Inglis and Barrington streets.

“That’s where you tend to get a lot of flooding on these extreme rain events,” he says. “I remember back in 2003, Hurricane Juan — who can forget. I came down that street that morning after the hurricane and there was somebody in a canoe, literally in a canoe.”

Mapping Halifax's Hidden Watercourses Over a decade ago, Dr. Eric Sanderson at the Wildlife Conservation Society...

Posted by Archaeology in Acadie on Tuesday, November 10, 2020

But Reid says in his thesis that by 1878, nearly 88 per cent of the surface waterways had disappeared from maps of Halifax’s peninsula.

“Almost all of it is now underground,” Fowler says. “There’s less than one per cent of that still visible above ground.”

He says one of the only remaining bodies of water above ground is Griffin’s Pond in the Halifax Public Gardens. There are also a few smaller ponds in Point Pleasant Park.

“Have a look around on either side of those nice, groomed gravel roadways and you’ll notice that those gravel paths often pass over little hollows,” Fowler says. “As often as not, they’re quite boggy. And that’s what Halifax peninsula used to look like.”

GPI Atlantic estimates that the loss of wetlands to development equates to around $2 billion annually in lost ecological services like water purification, recharging drinking water and enhancing fishery productivity.

On top of that, it estimates that the remaining salt marshes in the province provide over $400 million worth of ecosystem services to Nova Scotia communities each year. This includes flood and erosion control and infrastructure protection from storm surges.

Fowler says he's unsure why the Victorians filled in Halifax’s bodies of water, but he believes it was either due to aesthetic purposes or for the benefit of infrastructure.

Still, he says it raises questions of whether it’s necessary and what the benefits are when these bodies of water are put underground.

“I think it makes living in the city more interesting in the present,” he says. “If you look carefully, you’ll see the history. You’ll see the way street alignments respect the old bogs and rivers. You can actually stand over certain sewer grates, especially after a rainfall, and listen and you can hear the river down there; you just have to know where to look and where to listen.”