Perhaps it's no surprise a great white named Brunswick would appear to be on his way to the Bay of Fundy
Jun 11, 2019 10:43 AM By: Meghan Groff 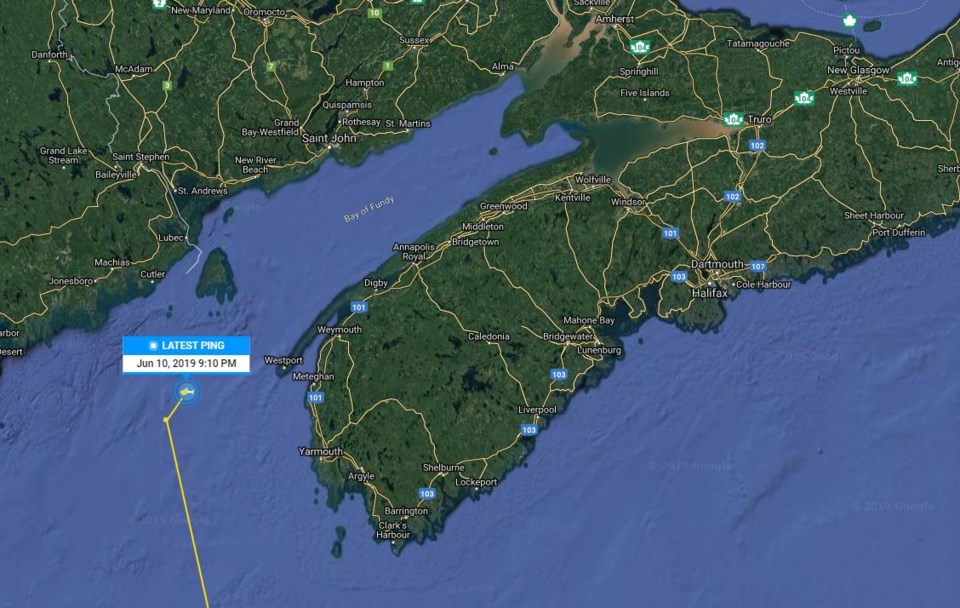 Perhaps it's no surprise a shark named Brunswick would appear to be on his way to the Bay of Fundy.

As the waters warm up off our coastline, it's expected Nova Scotians will be able to track some of the sharks tagged by OCEARCH throughout the summer and early fall.

Brunswick is the first to arrive. After making his way up the Eastern seaboard, he pinged twice Monday, revealing he's in the upper part of the Gulf of Maine, not far from Nova Scotia's Brier Island and New Brunswick's Grand Manan Island.

Named for Brunswick, Georgia, the 8'9" great white shark was tagged earlier this year near Hilton Head, S.C., the namesake of another shark that has gained quite a following here.

Tagged in March 2017, Hilton spent most of that summer and early fall along Nova Scotia's south shore in the Lunenburg area.

That led researchers to believe the sharks could be breeding in our waters.

When the weather warmed up again in 2018, Hilton returned to the same spot and OCEARCH decided to come here on a shark tagging expedition.

By the time they arrived in September, the great white had made his way to Cape Breton, but the mission was still a success.

The team took samples from seven sharks and tagged six, all of which can be tracked on the OCEARCH website.

The group plans to return to Nova Scotia this fall where it's expected they'll be looking to sample and tag more great whites in the area near West Ironbound Island, then possibly head to Cape Breton.

Whether or not Hilton plans a return to our waters isn't yet known. He's been shy lately, last pinging three months ago near South Carolina. In both 2017 and 2018, he didn't near Nova Scotia until late July.

Here are the last known locations of the six Nova Scotia tagged sharks:

I’ve been talking about Canada 🇨🇦 a lot & here I am! Did you know there is a place named after me here????? I’m not kidding! It’s called “New Brunswick”! I’m so honored! I wonder if there’s a statue of me in the town square?#sharks #saveourspecies #ocearch #NewBrunswick pic.twitter.com/Jswl5XT0nZ

Great white named Myra detected near Economy
Sep 4, 2018 3:29 PM
Comments
We welcome your feedback and encourage you to share your thoughts. We ask that you be respectful of others and their points of view, refrain from personal attacks and stay on topic. To learn about our commenting policies and how we moderate, please read our Community Guidelines.