Filmmaker William MacGillivary back to FIN with Under the Weather 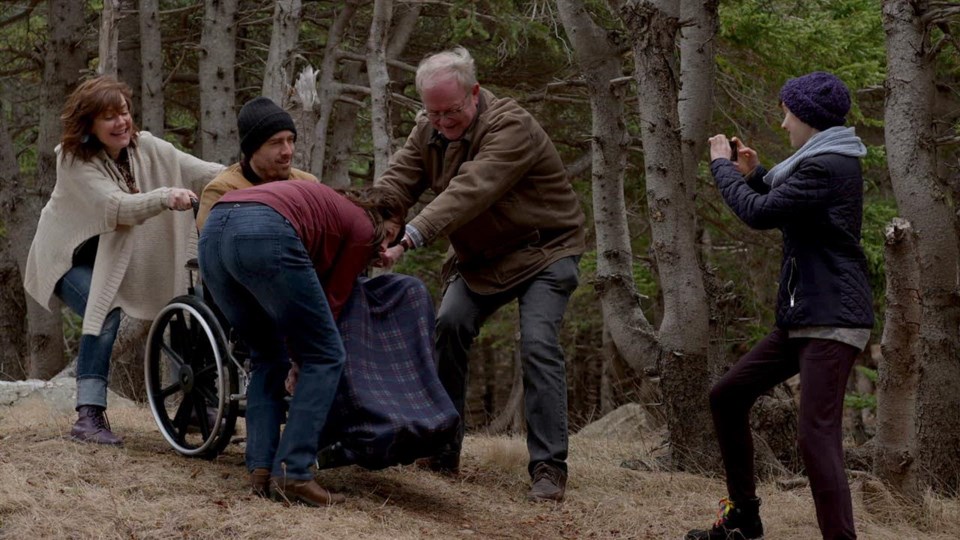 It’s been a long five years since lauded Atlantic Canadian filmmaker William MacGillivary’s last feature, but he’s coming back to FIN Stream full force with Under the Weather.

The incredible story of a family rallying around a family member dying of cancer is bleak and colourful, funny and an insightful character drama. MacGillivary’s feature is anything but one-note.

“We took care of a family member passing, and the entire experience was so profound. It was a whirlwind journey filled with sadness and joy, disappointment and hope. Our story in Under the Weather isn’t that one, but that time spent led us to want to explore the subject matter,” said MacGillivary’s partner and producer Terry Greenlaw.

“Other people of course have had similar experiences, and during the making of the movie, people talked to us about what they had gone through. The way of the future is a return to our past, in the sense that more people will choose now to die at home. We wanted to explore the idea of taking care of a dying loved one through a story about this fictional family.”

The film is one of just seven galas in FIN Stream: the Atlantic International Film Festival this year, and movies like Little Orphans, National Film Board flick The Forbidden Reel, Books Of Blood, Another Round (Druk) and Viggo Mortensen’s Falling join it.

“It’s always amazing to be included in our home festival, and I’m excited to be doing all of this. To think of the work they did to pivot into this streaming version is incredible,” said MacGillivary, a Newfoundland-born filmmaker whose work has been lauded at the festival and around the world.

His Man Of A Thousand Songs won Best Documentary, Best Direction and People’s Choice in 2010, with his Understanding Bliss also nabbing Best Atlantic Feature Film in 1990.

“When this festival began in 1981, it was meant to travel from province to province in Atlantic Canada. That didn’t happen, but now, in a whole new way, people all over Atlantic Canada will be able to access this year’s films. That’s some incredible forward motion,” he said.

He and Greenlaw have been making films together since 1986, and they spend time focusing on films set in their locale with subject matter near and dear to their hearts.

“We are firm believers that the subjects of our films are universal. We’ve been asked why we haven’t moved to Toronto, but we can tell all the stories we want to from here,” he said.

“Current events move us. We make stories out of what’s close to our hearts and what’s in our culture. We aren’t provincial or regional filmmakers. We just happen to be based here, and we’re happy we’ve stayed.”

The arthouse filmmakers are thankful for the praise they’ve received in their career, but just wish more people were able to share their films. However, to see people connect with the material is gratifying.

“We are so proud of our work – in 1998, we made One Heart Broken Into Song with an entirely Black cast, written and directed by two now well known Black Canadian artists. It was so important to see this film air on our national network, and it’s still being seen,” he said.

“People still reach out and tell us they loved it. We’ve had films play in Berlin, Melbourne and New York, and people who know nothing of our culture still respond. That’s amazing, to see our work strike a chord.”

MacGillivray says you can be assured of working with great actors in Newfoundland. That’s where they got leads Stephen Oates and Ruth Lawrence, who coincidentally directed another gala film Little Orphans, part of FIN’s line-up as well. “Terry discovered BC based Julia Sarah Stone while casting another film and while working with this amazing talent, we discovered she has Newfoundland roots too”.

“When we held auditions, we were blown away but not surprised although Stephen Oates was a great new find for us. We knew about him from Little Dog, but he was just incredible,” she said. “Ruth is someone we’ve known for years, and to have her and real-life partner actor poet Des Walsh playing opposite each other was amazing. We got to draw on the nuances or their relationship,” she said.

Greenlaw – on top of working with MacGillivary – has executive produced Black Cop and just produced the Shelley Thompson film Dawn, Her Dad, and the Tractor. She and MacGillivary are constantly supporting each other’s endeavours. “It’s been incredible watching Terry producing films about inclusion with great stories,” he said.

“Writing takes a long time,” MacGillivray said of his five-year feature film hiatus. “It’s delicate. And in this case, the subject matter was difficult. I’m happy we got Under the Weather done. It’s a film of stark reality that draws on emotion, but never feels like a Hallmark story.”

Though they agree it will be strange to not be able to watch the film with a live audience due to COVID-19, Greenlaw has hopes for the future.

“Soon enough I hope we can watch films with an audience, see them respond, and be in the position to do live Q&As with a rich discussion. That’s the ideal experience,” she said.

“In the meantime, we’re so happy that people all over the Atlantic provinces can watch this film, and hopefully there will be a combo approach in the future.”

The Under the Weather gala presentation is available for a 24-hour period, beginning at 7 p.m. on Saturday, September 19. To purchase tickets, visit here.