Update: Hundreds of Porters Lake residents forced to evacuate due to fire

Halifax Regional Municipality says over 1,000 residents are now being evacuated
May 23, 2020 3:38 PM By: Victoria Walton 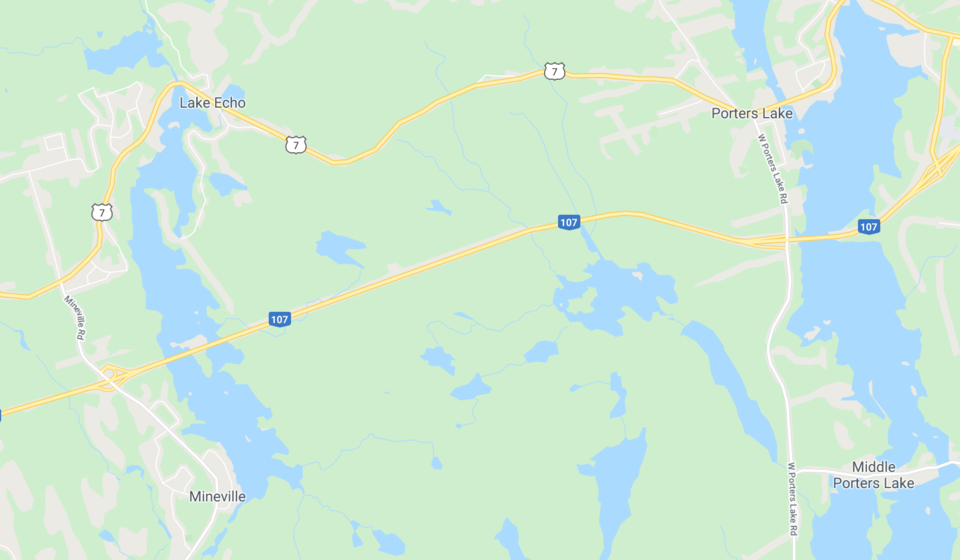 The Porters Lake area including Highway 107, which is partially closed due to the fire. (Google Maps)

An ongoing fire just outside Porters Lake near Highway 107 is causing the evacuation of some residents.

Councillor for the area David Hendsbee says he estimates there are about 100 homes in the area of West Porters Lake Rd. being evacuated between Highway 107 and Bellefontaine Road.

“If they’re only doing one side of the road maybe 50 homes, but if they’re doing both sides of the roads if going to be closer to 100,” Hendsbee tells NEWS 95.7.

At 3:30 p.m, Saturday, Halifax Regional Fire & Emergency confirmed that the evacuation was continuing down West Porters Lake Rd. as far as Marjorie Drive.

As of 4:30 p.m, Halifax Regional Municipality says over 1,000 residents are being evacuated, including those on Candy Mountain Road. They say the evacuation perimeter may need to be expanded again, depending on the status of the fire.

The fire began on the north side of the 107 and Halifax Regional Fire and Emergency responded just after noon today, but the fire soon jumped the highway this afternoon due to high winds. The Department of Lands and Forestry says the fire now covers about 40 hectares.

“The winds have now blown to the south and it’s now blowing towards the highway. That’s why the 107 Highway between exits 18 and 20 is now closed,” Hendsbee

In response, the Lake Echo Community Centre at 3168 Hwy 7 is open for evacuees.

The Porter’s Lake Community Centre is also being used as a first responder’s relief station.

On Twitter, Nova Scotia RCMP said residents will be informed directly if they are being evacuated.

Some residents in the Porters Lake area are being evacuated due to a forest fire. If you need to evacuate, you will be notified directly.

By 5 p.m. Halifax Regional Fire and Emergency said residents on Capri Drive had also been told to prepare to evacuate.

"We’ve got three choppers in the air fighting the fire and we’ve also got units on the ground," says Assistant Chief Nadya-Lyse Pare.

Pare tells NEWS 95.7 that the fire originally was spotted by a resident out four-wheeling, who quickly reported it to authorities.

"It was quite a ways back in the woods where there’s no houses or anything. So luckily he called us in and we got going," she says.

HRFE believes the fire could be contained as early as this evening, but it all depends on the wind.

"If you had called me an hour ago I’d say we’d be here till tomorrow, but things are looking much better now. So I imagine it’s going to go into the evening for sure, beyond that I can’t really say," Pare says.

"Winds do usually pick up around this time of day, so if the winds pick up it might get worse."

At this time, the Department of Lands and Forestry says no homes have been lost and the cause of the fire is still unknown.

Advisory issued about potential COVID-19 exposure at three spots in HRM
Nov 28, 2020 7:03 PM
Comments
We welcome your feedback and encourage you to share your thoughts. We ask that you be respectful of others and their points of view, refrain from personal attacks and stay on topic. To learn about our commenting policies and how we moderate, please read our Community Guidelines.