Downtown Dartmouth shop creates a space for makers to flourish

The Trainyard General Store features products from 150 makers from across Nova Scotia and beyond
Mar 11, 2020 3:45 PM By: Victoria Walton 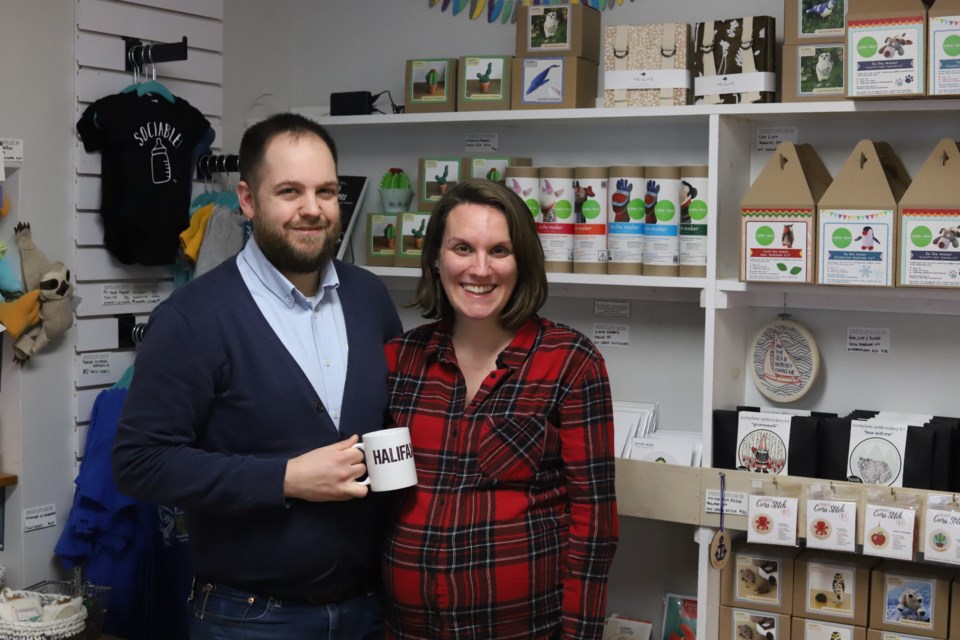 In spring 2016, The Trainyard General Store opened just as Dartmouth was seeing an uptick in small business.

“There’s sort of a whole crop of new businesses that came at about the same time as us,” says co-owner Kimberley Dares.

Sandwiched between the Portland Street Creperie and New Scotland Yard, the Trainyard General Store sells everything from DIY embroidery kits to handmade pottery, to clothing from local designers and even specialty chocolate.

“We have cards around the shop that say who made it and where they made it,” says Dares.

Dares and her husband Jason MacDonald say they’ve grown along with the shop, which began with the idea of creating a space for the local community to show off their talent and creativity.

“The magic of handmade, locally sourced goods is there’s a lot of appreciation can be done. You can really appreciate and see the love that somebody puts into their products,” says MacDonald.

After moving back from Ottawa to Dartmouth in 2015, the couple decided to take a leap of faith to open a shop, something MacDonald had always wanted to do.

“We were so excited about the idea of the business and about the things that we could do in the community that we couldn’t bear to wait another minute to start it,” he explains.

In the early days, Dares says it was nerve-wracking to approach makers and ask them to be a part of the store, which wasn’t successful yet.

“It was a lot of emails and Instagram messages out of the blue. And then it took a lot of nerve to talk to people at markets, I found that very daunting,” she says.

But over the past four years, Trainyard has grown from about 30 makers selling products, to about 150 makers at any given time. They started out mainly selling mostly commissioned products, but now it’s all wholesale.

“It’s been really amazing because there are some that we’ve been working with since the day that we opened, and so we’ve watched their businesses grow and we’ve stumbled along together,” Dares says.

Along with the store, their family has also grown. Dares and MacDonald had their first child in 2018 and are expecting another this April. But the nearby shopkeepers, makers, and even customers have been along for the ride.

“The first time our baby ever slept not in one of our arms, one of our customers rocked him to sleep,” says Dares. “There’s so much community togetherness that comes from handmade goods and that comes from working with small businesses, that’s really what we love.”

The store is also focused on giving back to the community it’s in. Trainyard donates five per cent of every sale to local charities.

“For 2020, we’re working with Hope for Wildlife, the MacPhee Centre for Creative Learning, and the Dartmouth Family Centre,” Dares adds.

MacDonald still works a full-time cybersecurity job outside the store, on top of being what he calls “chief carpenter and problem-solver.”

“If it had just been me we would not be nearly where we are. Kimberley’s got an amazing vision, she’s got the personality to grow this business, and it’s really on her back that the business that has gotten to the point it is,” says MacDonald.

Dares, a former pre-school teacher, is full-time at the store – at least until the new baby comes. But with four staff members to keep things under control, MacDonald and Dares seem excited about the future growth of the store.

“We’re finally at a place where we understand that this is a full-blown business now and we have to keep growing with it,” Dares adds.

As Dartmouth continues to increase in popularity among locals and tourists alike, the couple is finally beginning to see their shop as established, and think about the future.

“Trying to make it a more accessible and welcoming space I think is always the goal,” says Dares. “We’re hoping that the space will also be able to be used for things like pop-ups and little events that that will keep bringing people in and connecting.”

The province still considering opening borders to rest of Canada
Sep 18, 2020 7:35 AM

Province hires additional staff to help with 811 backlog
Sep 18, 2020 6:33 AM
Comments
We welcome your feedback and encourage you to share your thoughts. We ask that you be respectful of others and their points of view, refrain from personal attacks and stay on topic. To learn about our commenting policies and how we moderate, please read our Community Guidelines.