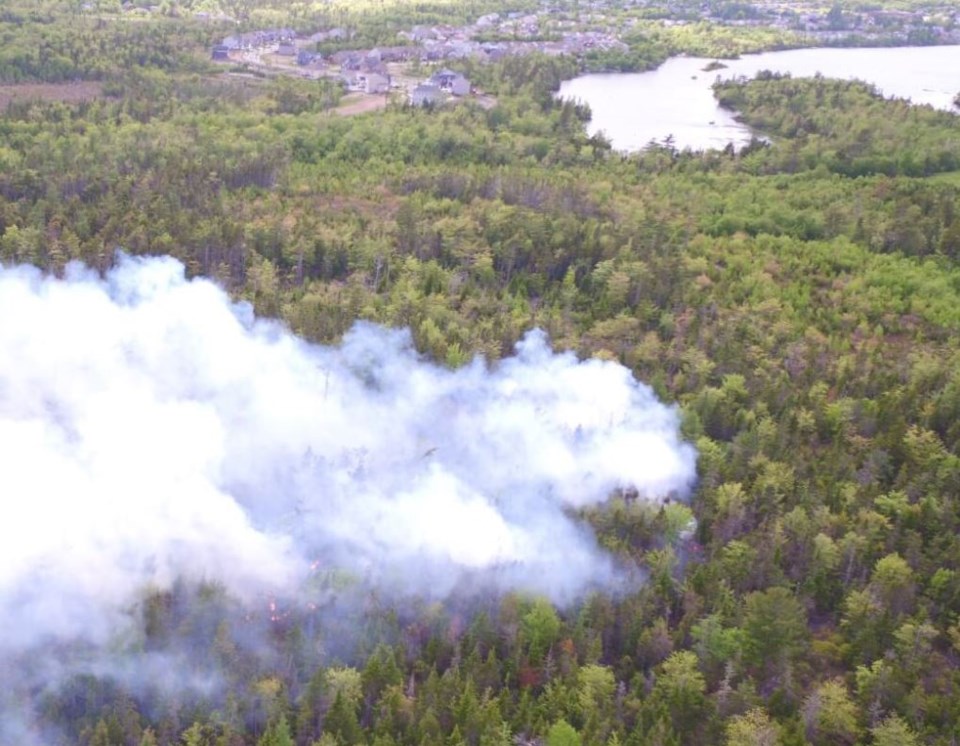 A wildfire that came dangerously close to a Cole Harbour neighbourhood is now 100 per cent contained according to the Department of Natural Resources.

However supervisor of fire management, Jim Rudderham, said a staff of around 20 people remain on site working to extinguish hot spots.

"They'll keep looking for smokes and as any new smokes pop up they will extinguish them and dig around the area to make sure it's completely out."

He said the fire will be considered completely out when they can go a day or so without finding a hot spot, and rain in the forecast later this week should speed up the process.

Crews were called to the Bissett Lake Road area around 3 p.m. Sunday and set up a command post to fight the blaze.

Rudderham said all wildfires are dangerous, but this one was particularly concerning because of its proximity to homes.

A photo tweeted by @hfxfire taken by a drone shows just how close the fire came to a residential area.

Halifax Regional Fire and Emergency's deputy chief Roy Hollett said flames were within 300 metres of the houses at the bottom of Astral Drive.

On Sunday, 100 homes were under a voluntary evacuation, however residents living on Beaver Crescent were allowed to return to their homes Sunday night. The evacuation for those living in 10 to 15 homes on Astral Drive was lifted Monday afternoon.

Rudderham urged Nova Scotians to check the department's burn restrictions before planning an outdoor fire. On Tuesday, those living in the Halifax area are not permitted to burn before 7 p.m.

We've heard reference in the media over the past day to the province's burn ban restrictions. It should be noted in HRM open-air burning is NEVER allowed after midnight.