Dispension Industries Inc. says its machines can dispense drugs such as hydromorphone to people addicted to opioids by scanning their palm.
Aug 24, 2020 3:52 PM By: Canadian Press 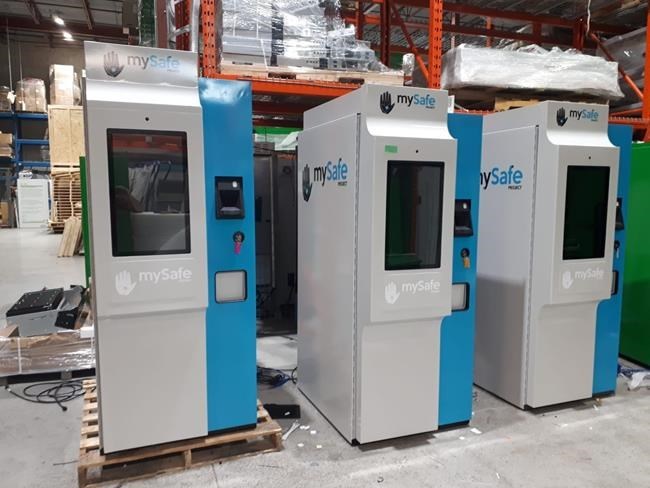 A Dartmouth company is rolling out five automated drug-dispensing devices across Canada this week that it says will help battle the country's opioid crisis.

Dispension Industries Inc. says its machines, which look like an ATM and weigh 360 kilograms, can dispense drugs such as hydromorphone to people addicted to opioids by scanning their palm.

Company president Corey Yantha says the plan is to install the devices by the end of this week in Dartmouth, N.S., London, Ont., and Vancouver and Victoria, B.C.

The machines, called the MySafe Verified Identity Dispenser, are being leased to clients and will be located in some pharmacies and safe injection sites where they will be bolted to the floor. Dispension will provide all of the data management services.

Dartmouth's machine will be located at the Pharmachoice in Highfield Park.

"People who are using illicit substances, have a history of overdose and test for fentanyl on their urine are eligible for the program," Yantha explains in an interview with NEWS 95.7.

"Once they're eligible, they'll be evaluated by a physician and the physician will identify the amount of medication they can access on a daily basis."

Those in the program will then have their hands scanned by biometric technology, which will register and encrypt their internal vein patterns.

"From that point on, a person can access their medication simply by scanning their palm," Yantha says.

Yantha says the rollout is an extension of a pilot project using the machines that began late last year in Vancouver's Downtown Eastside - an area that has been at the centre of the opioid crisis.

It's estimated more than 15,000 Canadians have died of an opioid-related overdose since January 2016 - more than 5,000 of those deaths have occurred in British Columbia alone.

"We've been able to demonstrate that this is a scalable harm-reduction tool that can save lives and reduce people's dependencies on illicit substances and crime," Yantha says.

Dispension Industries Inc. plans to open up a 20,000 square foot research and development facility in the old Value Village building in Downtown Dartmouth.

"We're looking at being a part of the rejuvenation of the Downtown Dartmouth community, create some great jobs, develop our kiosks and export them from here," says Yantha.

This report by The Canadian Press was first published Aug. 24, 2020.

The Canadian Press with files from Meghan Groff of HalifaxToday.ca