After a lengthy public hearing Tuesday hearing from dozens of residents, Council voted to allow Scotian Materials Ltd. to move ahead with a proposed asphalt plant north of Hwy 103
Oct 17, 2018 5:37 AM By: Andrew Pinsent

HALIFAX – Despite large opposition in the area, a proposed asphalt plant in Tantallon received the go-ahead from Regional Council Tuesday after a four-hour public hearing and nearly two hours of debate.

Council approved a site-specific amendment to HRM’s planning strategy and land-use by-laws to allow Scotian Materials Ltd. to operate a temporary plant in an area north of Highway 103 and west of Little Indian Lake, pending approval from the provincial government.

The plant would operate in conjunction with an existing rock quarry on the four-hectare site, which municipal staff note in a report to Council is 2.6 km west of the Westwood Hills development and 2.3 km north of other developments separated by Hwy 103. 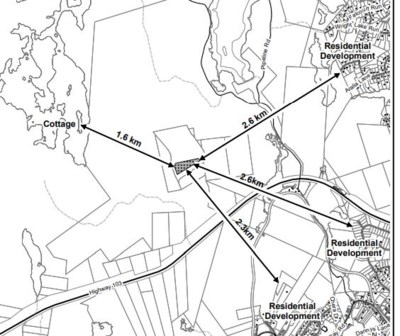 A map of the proposed asphalt plant provided in an HRM staff report (HRM).

The decision was a disappointment for the vast majority of 26 residents who spoke at a public hearing, largely to voice concerns over proximity to homes, emissions issues and potential impact on property values. Others were concerned about the precedent it could set for further industrial expansion in the area.

Councillor for the area Matt Whitman also felt his constituents were being ignored, as municipal staff have had recommended approving the project.

“I’ve never seen so much overwhelming opposition to any file I’ve been involved in,” Whitman said, noting staff’s own survey had found 95 per cent of those asked were against the proposed site.

Staff noted in their opinion 2.3 km was enough to mitigate concerns raised by residents, while similar plants that exist in other parts of HRM were actually closer to homes.

Councillors Steve Streatch and Tony Mancini, who both have an existing plant in their districts, said they've never received complaints from residents who were in fact closer than 2.3 km.

Potential emissions from the site, it was also noted, would be regulated by Nova Scotia’s Department of Environment, not HRM.

Rob MacPherson, president of Scotian Materials, said in his allotted time the company had done an unprecedented level of consultation to address concerns.

Council voted 12-4 to approve the plant with two new conditions: 1) that it run a so-called ‘dry plant’ with no liquid runoff directed at the ground and 2) a 60-day limit on the total time the plant can operate every year.

Call for federal government to protect work at Irving Shipyard

Regional Council unanimously voted in support of workers at Irving Shipyard Tuesday, calling on Ottawa to stop any potential plans to split maintenance work on navy ships with Davie Shipyard in Quebec.

The motion of support was a late addition to Tuesday’s agenda by Spryfield Councillor Stephen Adams and comes after reports maintenance work being performed in Halifax could be moved.

It asks the Trudeau government to stop any such plans “to avoid massive job losses and an economic downturn in the region.”

Adams conceded it a federal issue when tabling his motion, but said there were “many reasons” HRM should be involved, including the well-being of its constituents and potential impact on the tax base.

The vote for support also came the same day unionized workers rallied outside City Hall to demand any work at Irving be untouched, part of a new campaign dubbed ‘Ships Stay Here.’

A number of employees visited Council chambers to see debate and left after Adams’ motion passed.

Council voted down a request from Councillor Richard Zurawski to write the province to voice its opposition to offshore drilling.

Zurawski said he tabled the motion in light of a recent UN report on climate change and argued the prevention of off-shore drilling was necessary to prevent any ill-effects on the environment, such as a catastrophic accident or other harms.

“Councillor Zurawski, I understand your concerns, very clearly the speech you gave was a nice speech,” Streatch said. “But absolutely not.”

The motion was defeated by a 10-6 vote, with Councillors Streactch, Adams, Smith, Zurawski, Shawn Cleary and Waye Mason voting against.

Regional Council approved risk assessments for areas of the municipality most prone to flooding during its meeting Tuesday, moving forward with plans to address HRM’s most flood prone-areas.

Municipal staff identified 30 key sites and ranked the top 10 for a more detailed assessment and plan for flood mitigation, with the hopes of qualifying for federal funding under the National Disaster Mitigation Program.

The total cost of those top ten solutions is in the $15 million range, with projects that qualify under the federal program eligible for up to 50 per cent of costs.

Tuesday’s approval means staff will immediately prepare federal funding proposals for the top two flood-prone areas in the municipality, Sackville River and Shuebenacadie Lakes, ahead of an Oct. 23 application deadline.

The two immediate studies and proposals for the Sackville River and Shubenacadie Lakes will cost roughly $150,000 and $300,000 respectively.

Council approved a look at potential issues with LED streetlights in the municipality after a number of reports of problems from residents.

Councillor Adams requested the staff report after residents in his district had been waiting weeks for streetlights to be replaced, lights that were recently installed and have a 10-year life expectancy.

In supporting Adams’ motion, Councillor David Hendsbee said the new LED's were also supposed to ‘self-report’ to HRM when they’re out, but he’s noticed that’s not the case.

He felt the municipality had been “sold a bill of goods,” with the new lights, while Councillor Outhit noted they were also supposed to include dimming technology that does not yet exist.

Council unanimously voted for staff to study any possible wider issues with the lights and their replacements.

Municipal staff will analyze five years worth of capital budget estimates and report any issues back to Council after a request from Halifax West-Armdale Councillor Shawn Cleary was approved Tuesday.

In asking for the report, Cleary said a few projects had come back with wildly varying budget estimates and an analysis would help provide clarity to Council on potential issues.

Council approved the request for a staff report 16-0.

CAO Jacques Dube said such a report would take about eight or nine months to return to Council.