Prime Minister Justin Trudeau is scheduled to attend the event and a book of condolences will be available on site for the public to sign
0
Feb 20, 2019 11:59 AM By: Meghan Groff 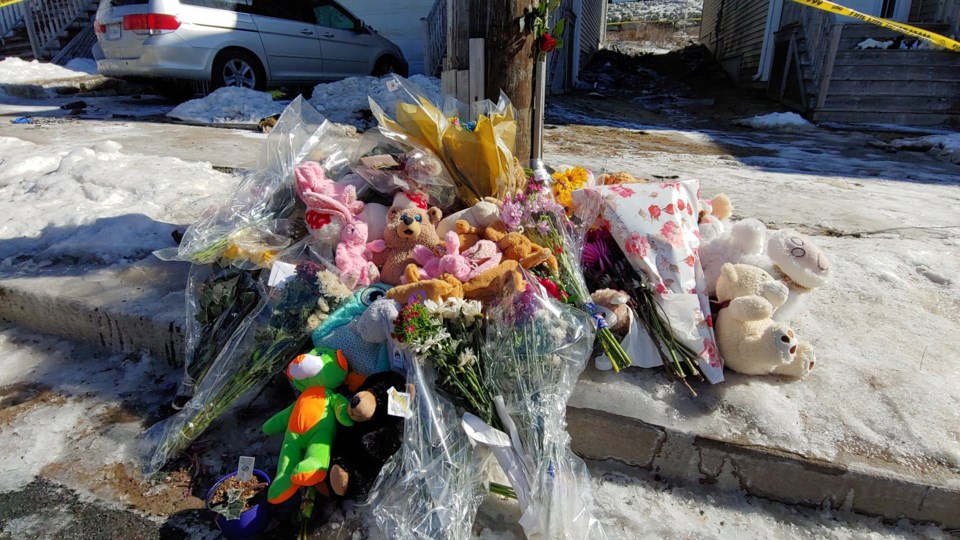 A collection of flowers and teddy bears outside a Quartz Dr. where 7 children died in a fire on Feb. 19, 2019 (Matthew Moore/HalifaxToday.ca)

Halifax Regional Municipality will be holding an community gathering Wednesday night to remember the victims of a fatal fire in Spryfield.

Their parents, Ebraheim and Kawthar Barho, were taken to hospital and Ebraheim's injuries are life-threatening.

Deputy mayor Tony Mancini says Haligonians want to help in the wake of this tragedy.

"When something terrible like this happens, that's what we do, we come together as one community to support the family, to support our first responders and to support that Spryfield community."

The gathering will be held at Grand Parade from 7 p.m. to 8 p.m. and is open to anyone who wants to show their support.

Prime Minister Justin Trudeau is scheduled to attend the event and a book of condolences will be available on site for the public to sign.

In addition, a grassroots social media campaign is asking people to put a teddy bear outside their front door to pay tribute to the Barhos.

The post is encouraging those in the municipality, province and country to join in the effort.

Dozens gathered together outside the charred remains of the Governor's Brook home Tuesday night to mourn the loss of the seven children.

A GoFundMe page has been set up by family friends, including the Imam Council of Halifax and in cooperation with the HEART Society, to help pay for expected expenses.