Despite the downsize, the first growing season was fruitful
0
Oct 5, 2019 4:15 PM By: Victoria Walton 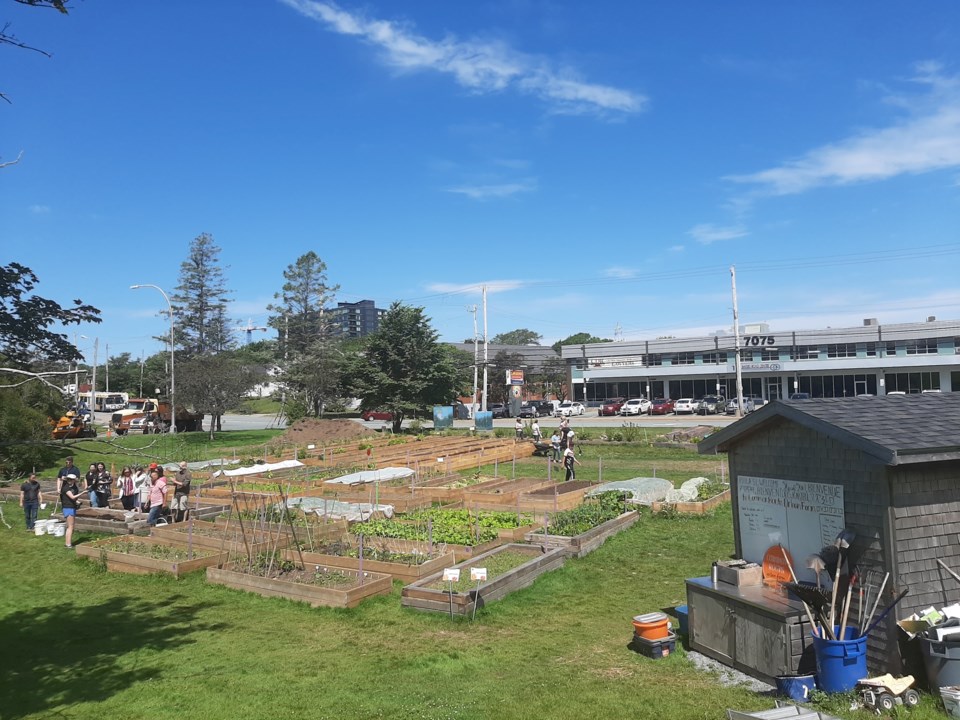 This spring, Common Roots Urban Farm (CRUF) was evicted from its longtime location next to the Queen Elizabeth II Health Sciences Centre Infirmary.

Due to the expansion of the hospital, the farm migrated to a new spot, on Bayer's Road next to the Bicentennial Highway.

"We went from 200 plots to 36 plots," says Sara Burgess, the coordinator of the farm's BiHi location.

The former location, visible from the Willow Tree intersection, had grown with Halifax over the past seven years.

"We were really lucky to have such a large space in the middle of the city, that sort of space is hard to come by," adds Burgess.

Despite the downsize, Burgess says the first growing season was fruitful.

"It was really successful," she says. "We've grown tomatoes and beans and salad mix, which were always great producers at our old site, and Heirloom Squash as well."

The group was awarded the new location from the city in April, but due to the wet spring, CRUF didn't get to move into their new location until months later.

"We were bringing our soil over and the ground was so wet that we couldn't actually get actively on to the new site until June 22," adds Burgess.

But once they got going, there was high demand for plots.

"We had a survey at the beginning and went through a lottery process to get people into plots," explains Burgess. "We've got a long wait list still, as we did at the old site."

CRUF has also had support from local businesses on Bayer's Road, including Blue Ocean Contact Centres.

"They ended up supporting the build of our Market Garden. All of our beds are raised beds and they supported covering the cost of that, which was really wonderful and very welcoming," says Burgess.

In addition, the Chameleon Cafe and the Smoke Shop in the Bayer's Road Centre are selling vegetables from the farm.

"We have cherry tomatoes in little penny candy bags next to the penny candy," says Burgess. "It's pretty cute to see them sitting there next to all of the junk food."

Burgess says that CRUF hopes to stay at the BiHi location for the long haul, but that depends on city planning.

"You never know what's going to come down the road, but the plan is to stay there," she adds.

The farm also would like to expand, but are currently prevented from taking up more than five per cent of a public park, according to the Community Garden Administrative Order.

Instead, Burgess says the farm hopes to expand to multiple locations in different parts of the community.

"We're interested in looking at other sites and having several smaller farms around the HRM, rather than trying to build one big farm centrally," she says.

CRUF already has a second location -- the former Back to Our Roots Urban Farm at the Nova Scotia hospital.

"With the move and thinking about expanding to multiple sites, they have rebranded as Common Roots Urban Farm Woodside," says Burgess.

Burgess says there has been less foot traffic at the BiHi location, but they still saw plenty of community groups this summer, including the nearby YMCA Centre for Immigrant Programming and the HRM St. Andrew's Centre.

As the growing season winds down, the final event for the CRUF season will take place at the BiHi location on November 2.

The event includes food, live drumming, and the highlight of the event -- the pumpkin smash.

"Everyone brings their old jack-o-lanterns, it's right after Halloween, and then we give kids sledgehammers and they smash the pumpkins for compost for next year," Burgess laughs.

After the frost hits, the farm will wind down for the winter, in preparation for opening day next spring on May 1, 2020.