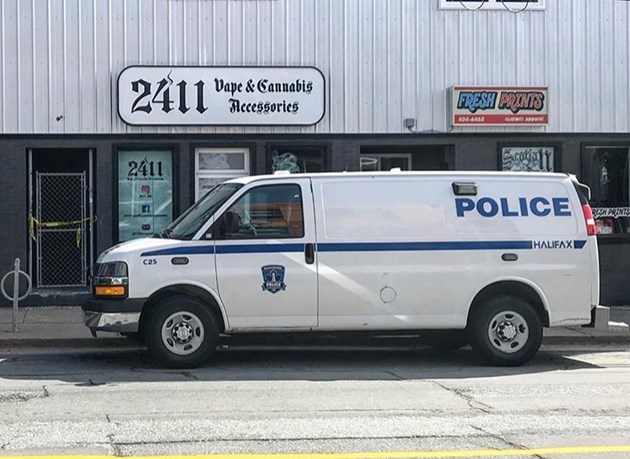 A police vehicle is seen parked outside Coastal Cannapy Medical Dispensary on Agricola Street in a photo posted to the businesses Instagram page. (Instagram/coastalcannapyhfx)

Halifax Regional Municipality says Coastal Cannapy Medical Dispensary has been ordered by the Supreme Court of Nova Scotia to immediately cease operations, including the selling, dispensing and storage of cannabis.

They say in a decision Wednesday, Justice James Chipman also ordered the premises at 2411 Agricola Street to be vacated within 24 hours.

The municipality applied to the province's Supreme Court to have the cannabis dispensary closed in early May saying they don't issue permits to businesses that sell illegal products.

In a Facebook post Wednesday night, Coastal Cannapy Medical Dispensary said that would be their last night of operation.

However, they added, "We are working on a new location and delivery service, so hang in there!"

"These are courts in this land saying 'you cannot do what you're doing'," Elliott told NEWS 95.7 on Thursday. "Now it can't be anymore clear that if they were to show up anywhere else in Halifax Regional Municipality or in fact in the country and try and sell marijuana it would not be legal."

Elliott said papers were handed to the appropriate people on Thursday, and the expectation is that the dispensary will be shuttered completely by Friday afternoon.

This is the first time the municipality has taken this kind of action against a cannabis dispensary.

"We've chosen this particular company and case because it's the same people involved who continue to be in violation," said Elliott in an interview earlier this month.

He said their issue with Coastal Cannapy is strictly related to zoning and other bylaw violators will be assessed on a case-by-case basis.

"We're not talking about the criminality of this," said Elliott. "What we're dealing with is they are operating without appropriate permits in place. A judge found that (Wednesday), a judge found that in December. This business doesn't seem to pay any attention to Canadian law."

The dispensary has dealt with recent a break-in and several police searches.

When cannabis becomes legal later this year, the province will allow only select Nova Scotia Liquor Corporation outlets to sell the product.

Those operating a store selling cannabis illegally could be fined between $10,000 and $25,000 under Nova Scotia's Cannabis Control Act.