'The loss is immense, and we miss our children every day,' said the statement from Ebraheim and Kawthar Barho
0
Feb 18, 2020 2:57 PM By: Meghan Groff 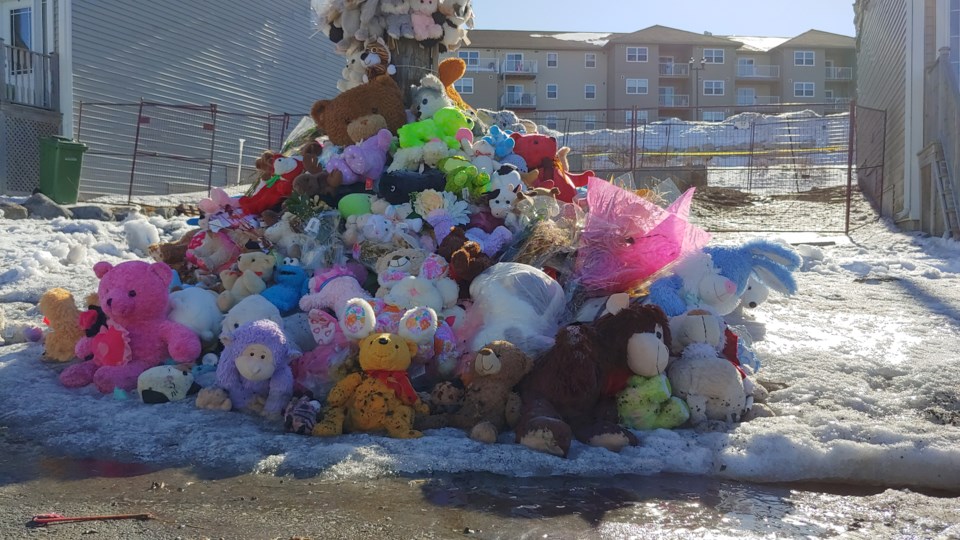 A large pile of stuffed animals and on the lot where the Barho family home once stood (Matthew Moore/HalifaxToday.ca)

On the eve of the one year anniversary of a tragic fire that claimed the lives of seven children in our community, their parents have released a statement.

Posted on the  Hants East Assisting Refugees Team Society (HEART Society) Facebook page, Ebraheim and Kawthar offer up their gratitude to many Nova Scotians who have shown them love and support.

"The loss is immense, and we miss our children every day," said the statement. "Still we have found comfort in the kindness of strangers, in the courage of first responders, in the dedication of healthcare professionals, and in the sense of belonging offered to us by this community. We will keep each and every one of you in our hearts forever.”

The HEART Society sponsored the Barho family to bring them to Canada in 2017 from Syria.

The blaze tore through their family home on Spryfield's Quartz Drive in the early morning hours of February 19, 2019.

Mother Kawthar escaped with only minor injuries, but father Ebraheim was seriously injured trying to save the lives of his children.

An online fundraiser set up by the HEART Society has raised almost $730,000 for the family and the organization also posted its own statement on Facebook.

"In the past year, the only thing that rose to the same level as the tragic loss of the seven children we loved, was the outpouring of compassion and support from communities, both near and far," it said.

"With each passing day we have thought about Ahmad, 14; Rola, 12; Mohamad, 9; Ola, 8; Hala, 3; Rana, 2 and three-month-old Abdullah. They are no longer with us, but in difficult times our memories bring comfort."

HEART thanked the many people and organizations that have supported Ebraheim and Kawthar this past year, including first responders, hospital staff, ISANS, members of various mosques and thousands of Canadians.

"We established the Hants East Assisting Refugees Team because we wanted to help those who were suffering, to bring the compassion of our community to bear on those in need. In turn, you have shown us that same love, and we will never forget it."

In early September, investigators with Halifax Regional Fire and Emergency (HRFE) announced they weren't able to identify the cause of the deadly fire.

"We investigated every piece of evidence available and tested every possible theory to learn what we could about this fire," said fire chief Ken Stuebing at a news conference on Sept. 4. "Despite our best efforts, we are unable to say what caused this tragic event."

Investigators concluded it was not started by cooking or other kitchen activities, there were no electrical defaults and nothing at the scene led investigators to believe the fire was suspicious

At that news conference, deputy fire chief Dave Meldrum told reporters since January 2015, around 25 per cent of major fires in the HRM have been classified as undetermined.

"The volume of fire and the extent of damage to evidence is a serious obstacle to fire investigators," Meldrum said. "In a fire of this magnitude, it's common for materials to be totally destroyed by fire or washed away by necessary firefighting activities."

Stuebing said the Quartz Drive fire was one his members will never forget.