Steve Craig has since taken down a social media post about the meeting and has issued an apology
Nov 6, 2019 4:25 PM By: Meghan Groff 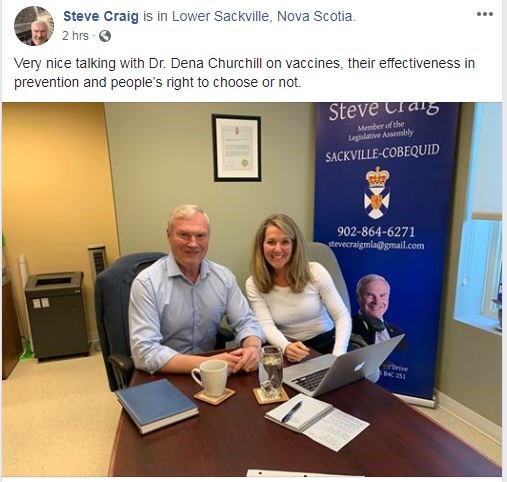 An Autism advocacy organization says, while it condemns a Nova Scotia MLA for meeting with someone known for her anti-vaccination views, it accepts his apology.

Earlier this week, Steve Craig shared a photo on social media of his meeting with a former chiropractor.

"Very nice talking with Dr. Dena Churchill on vaccines, their effectiveness in prevention and people's right to choose or not," said the post from the MLA for Sackville-Cobequid.

Earlier this year, Churchill was ordered to pay $100,000 after admitting professional misconduct for spreading vaccine skepticism on her blog, "Dr. Sexy Mom."

She refused to take down the posts despite orders from the Nova Scotia College of Chiropractors and ultimately surrendered her licence to practice chiropractic medicine.

Craig has since been deleted his post, replacing it with one that says "I apologize for offending or upsetting anyone with the tweet I have since deleted. I totally support the PC Caucus mandatory vaccination bill. Thank you for providing me much feedback on this important topic. I am always willing to learn."

Craig turned down an opportunity to appear on NEWS 95.7 to discuss the matter.

He is a member of the Progressive Conservative (PC) party, which just last month called for the mandatory vaccination of public school students in Nova Scotia, unless they have a medical exemption.

"I think it's good governance to listen to different perspectives, to be respectful of different opinions. Even if you don't necessarily agree with them, you can still listen to them," Houston says. "And I think that's what's happened here."

He adds, "I want caucus members that are respectful of other people's opinions, even if we don't agree with them."

Autistics United Nova Scotia's Alex Kronstein says he understands elected officials are obligated to discuss a variety of issues with their constituents, but he's shocked Craig would meet with someone promoting what he believes to be a harmful stance.

"In her various posts, she was promoting a lot of highly dangerous and false information regarding vaccines," he says.

He points worldwide reports of measles outbreaks, including here in Canada, where the disease was declared eradicated in 1998. Its resurgence has largely been blamed on the anti-vaccination movement.

Kronstein says it's appalling some people still cling to the belief that vaccines are linked to autism, despite those claims being repeatedly discredited.

"Many people in the autistic community have a very special interest in the whole anti-vax discussion because it promotes a lot of stigma against autistic people," he explains. "They say we're vaccine injured, but we're not."

Kronstein says Craig can't take back the post, but taking it down and apologizing is a good first step towards making amends. He's hoping he'll get a chance to meet with Craig in person to discuss the matter.