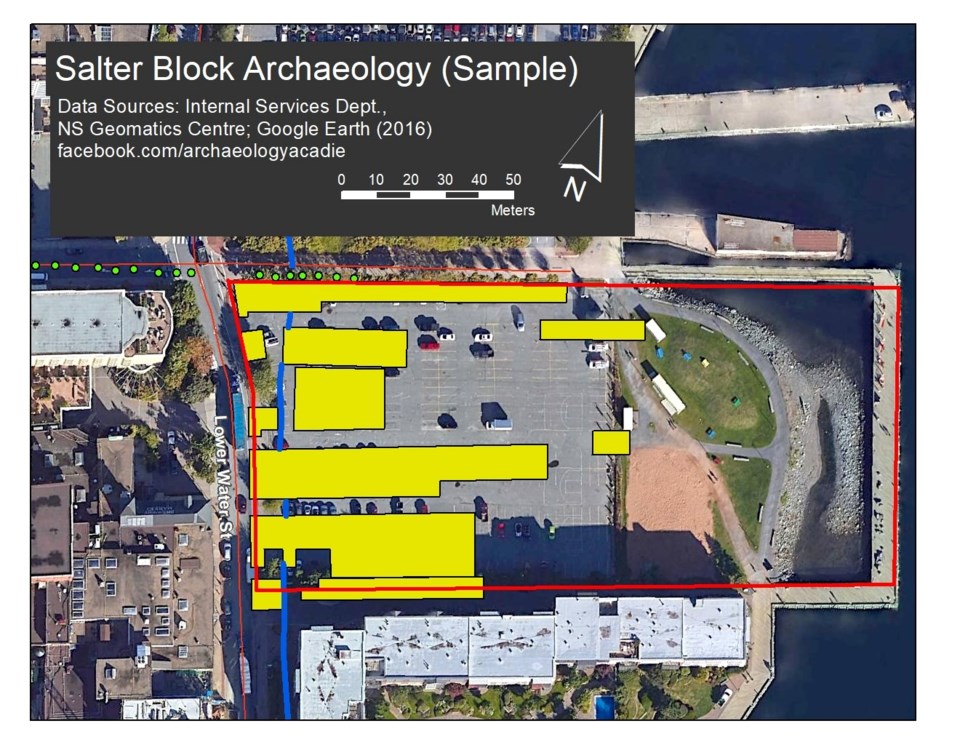 A map posted to the Archaeology in Acadie Facebook page shows an approximate overlay of Victorian buildings (yellow), the early Halifax shoreline (blue), and the old town wall (green dots) (Archaeology in Acadie/Facebook) See more maps in post at bottom of story

Nova Scotia has launched a design competition, inviting architectural teams from around the world to submit plans for a new cultural hub on the Halifax Waterfront that will house the Art Gallery of Nova Scotia.

The province says the space should give the public access to art, culture, world-class exhibitions, events and programming.

One local archaeologist is hoping our history will also be incorporated into the design, and he thinks we should look to Montreal for inspiration.

Pointe-à-Callière is Montreal's archaeology and history complex. Built on the spot the city was founded, it aims to showcase the stories of the people who have lived in that location for more than 1,000 years.

"This is a real opportunity," he told NEWS 95.7's The Rick Howe Show. "The stories that are here underfoot are incredible and people will come to see this if we would just get out of our own way and develop that, in addition to building and remaking the fabric of the city."

He said, as construction on our new complex starts and crews start digging down, there could be an opportunity to find unique items.

"Sometimes we get old building foundations and elements of infrastructure down there, drains, sewers and all sorts of interesting things," Fowler said.

"In fact, that's part of what's featured at Pointe-à-Callière. They've got part of the old Montreal sewer down there. I think it's Victorian-era, but it's part of the exhibit."

Fowler has taken some old maps of Halifax and overlaid our modern street structure (see Facebook post below).

He said the original shoreline of the harbour was somewhere in the vicinity of Lower Water Street. In the Victorian period, fill started being dumped in, moving the waterline several hundred feet.

"It's pretty clear that when you dig down there, you're going to get fill in a lot of that area," he explained. "You're going to get, probably a lot of Victorian buildings, warehouses and things. Part of the old industrial and merchant infrastructure of this town will be evident."

Fowler said the new structure might even clip Halifax's old town wall, which used to run down what we now know as Salter Street.

Since the cultural complex will abut the old shoreline, there could also be an opportunity to borrow an idea from Quebec City.

"They've paved lines along old Quebec to show where the shoreline was at different stages in the town's history," he said. "It's just really cool and easy to do."

"It doesn't cost a billion dollars to do that and it gives residents and visitors an encounter with the history of the place."

Pointe-à-Callière gets more than 350,000 visitors a year. Montreal is a bigger city than Halifax, but with 324,828 passengers brought here on cruise ships alone in 2019, he thinks many tourists strolling the waterfront would be interested in visiting an exhibit showcasing our history.

"I suppose it's up to the successful architectural design firm to engage with these ideas or not," Fowler said.

"I think we need a bit more public awareness about the richness of our heritage resources," he added. "I think most of the public gets this actually. Maybe we ought to push that awareness up to our leadership and let them know we value this stuff."