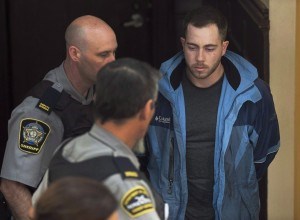 A Halifax man convicted of second-degree murder in the death of an off-duty police officer had his appeal heard today in Nova Scotia Supreme Court.

Christopher Garnier, 31, is appealing his conviction and sentence in the murder of Catherine Campbell.

Garnier was sentenced to life in prison in 2017 with no eligibility of parole for 13 and a half years.

Defence lawyer Roger Burill argued police presented a false circumstance of urgency in securing a confession during an interrogation that lasted over eight hours.

He also argued the jury did not receive enough information about false confessions.

Crown attorney Mark Scott told the panel Garnier seemingly wanted to confess from the get-go and the waiting period to apply for parole is not unreasonable.

The judges will render a decision on the appeal at a later date.