3D crosswalk in Dartmouth to be reviewed by HRM staff 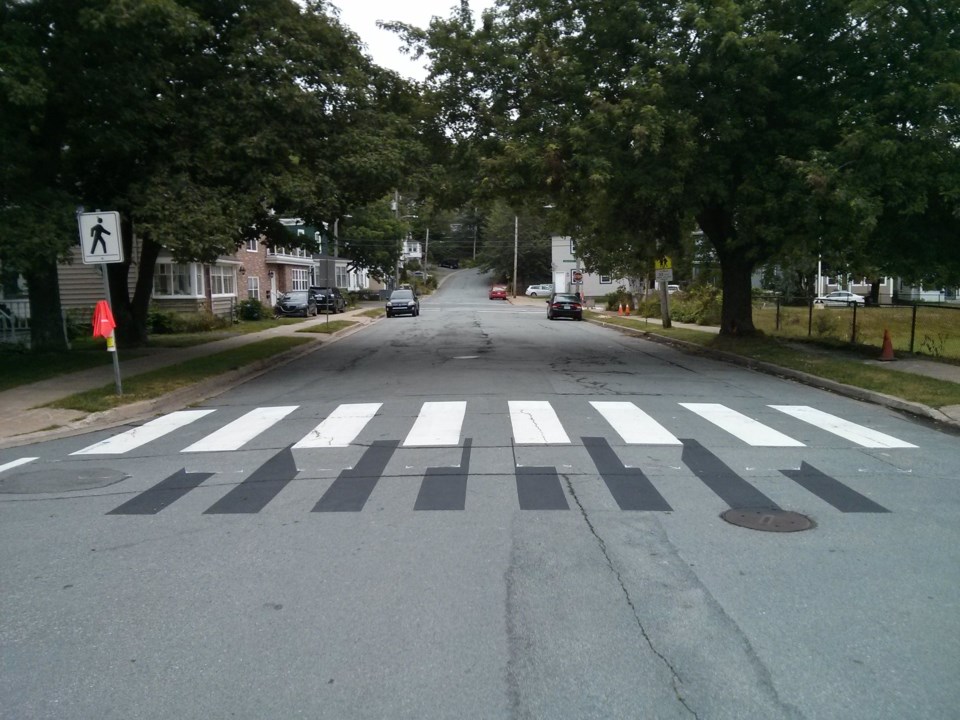 It appears a 3D crosswalk in Dartmouth will be sticking around, at least temporarily.

Crews were on scene Tuesday morning to remove shadows that were painted on existing zebra markings in an attempt to make it appear the crosswalk on Erskine St. at Elliott is floating in mid-air.

However, a Halifax Regional Municipality spokesperson indicates work to remove the optical illusion has stopped for now.

"Municipal staff are currently reviewing the situation, with the safety of residents as our top priority," said the statement emailed to HalifaxToday.ca. "A decision will be made in the coming days regarding the status of the artwork at this crosswalk. Further details will be shared once they become available."

Doug Carleton is behind the artwork that has garnered a lot of attention on social media.

He was inspired by similar projects in other cities, including Montreal and Waterloo, to start adding to the existing paint.

Carleton says it's only half finished and admits he didn't get permission before starting his work.

"Once the shadows were done and you could see the effect, there was enough of it there that your mind filled in the rest," he said. "Obviously you can tell from the reaction over the last couple days online that people like it."

"You only have to walk in front of it to see it's effective."

Carleton believes 3D crosswalks could be an affordable way to increase pedestrian safety in HRM.

"You could be saving yourself money ... creating a tourist attraction and generally putting a smile on people's faces."

He said, even though we can't allow people to just paint whatever they want on the streets, now that it's already there, he'd like it to stick around as a pilot project.

"It's a very minor side street with very low traffic volumes," he told NEWS 95.7's The Rick Howe Show. "I don't think it was causing any harm. The crosswalk was still very much recognizable."

"From what I understand, there is evidence to suggest street art does slow traffic down and speed is one of the main issues we have."

However, a crosswalk safety advocate hopes the additional paint won't be around for long.

President of the Crosswalk Safety Society of Nova Scotia, Norm Collins, says studies out of the U.S. have shown 3D crosswalks are a distraction for drivers because they're looking at the artwork on the road instead of scouting to the left and right for approaching pedestrians.

"I've never encountered a 3D crosswalk myself, but it seems sensible to me that the first time I came upon one, I might be startled and I might slam on the brakes, I might swerve, I might go through the crosswalk and I might hit a pedestrian," Collins explained.

"My job [as a driver] should not be to look at art on the road, it should be to look for pedestrians."

He adds if the aim is to slow down drivers in residential areas, speed humps and rumble strips are effective methods.

There is one thing Carleton, Austin and Collins can all agree on.

All three would rather crews prioritize touching up the faded paint at crosswalks around HRM over removing the 3D effect on Erskine St.