The motive behind the attack remains a mystery, and Toronto police Chief Mark Saunders said he wouldn’t speculate
Jul 23, 2018 6:36 AM By: Rogers Media 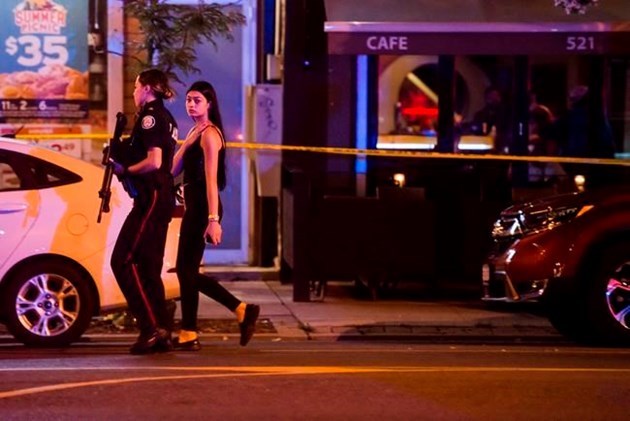 A 10-year-old girl and 18-year-old woman are the two people who died in Sunday night’s shooting on the Danforth, Toronto police Chief Mark Saunders confirms.

The shooter, a 29-year-old man, is also deceased from a gunshot wound but it’s not yet clear if it was self-inflicted or the result of an exchange of gunfire with police.

The motive behind the attack remains a mystery, and Saunders said he wouldn’t speculate. “We do not know why this has happened yet,” the chief said. “It’s going to take some time.”

Thirteen people between the ages of 10 and 59 were injured in the attack outside a restaurant on Danforth Avenue near Logan Avenue at around 10 p.m.

Saunders said their injuries ranged from “minor to serious.”

Toronto police swarmed the area after reports of multiple gunshots. Witnesses told CityNews that they heard up to 25 gunshots.

The injured were taken to various hospitals across the city. Sunnybrook Health Sciences Centre said its trauma centre received three patients. Michael Garron Hospital, formerly the Toronto East General Hospital, said doctors treated seven people for various injuries, two of which were gunshot wounds. Some of the injured at Michael Garron were treated and released from hospital.

Saunders said the shooter exchanged gunfire with police officers, though no officers were injured. It is not yet clear if the suspect died as a result of the standoff or if it was a self-inflicted injury.

The province’s Special Investigations Unit (SIU) said the suspect was walking along the Danforth when he “fired shots at groups of people several times.”

“Several people were struck. Two civilians were fatally injured,” the SIU said in a release on Monday.

Police tracked down the suspect on nearby Bowden Street and exchanged gunfire with the suspect. He then fled the area and was found dead on Danforth Avenue.

Saunders would not speculate on what the motive may have been behind the attack, including the possibility that it may have been a terrorist incident.

“I’m keeping everything open, I’m looking at absolutely every single possible motive for this,” said Saunders. “When you have this many people struck by gunfire it’s a grave concern. I certainly want to find out exactly what it is, so I’m not closing any doors or any chapters on this and I certainly don’t want to speculate as well.”

When asked by reporters at the scene, Saunders said this was not a random shooting.

“I’m not calling it random. This person was here and he definitely shot. I don’t know why he did what he did,” he said.

Saunders wouldn’t say how the suspect died but said it appears it may be from gunshot wounds. He also wouldn’t comment on whether the fatal shot was self-inflicted.

“I wasn’t there, we don’t know, we’re trying to descale it to the best of our ability to make sure that we’re accurate. I can tell you there was an exchange of gunfire,” he said.

Saunders said the suspect is not known to them at this time, but that he did use a handgun.

Somebody yelled ‘get down,’ witness says

The shooting happened in a neighbourhood known for its bustling cafes and restaurants. At the time, people were enjoying a summer evening out with family and friends. Some of the witnesses in the area said they saw people helping the victims before paramedics arrived. Residents in the area said they are in shock and disbelief.

Carter Ashenafi was having dinner with his family on the Danforth when shots rang out. He fled to the kitchen while his family went into the basement.

“I was with my family and we were just eating. We were finished eating, it was dessert. After we’re done that, the manager came and told us there’s been a shooting. And before the manager finished his sentence, they started shooting,” Ashenafi said.

Helen, who didn’t want her last name made public, lives on the Danforth and saw several of the victims.

“When I crossed the street I saw two women, maybe in their 20s, trying to be resuscitated and apparently one of them that I saw died. And then I saw another man at the corner store, cafe, and he was lying down and he also got shot. That’s what I saw.”

She said members of the public sprang into action to help the victims before paramedics arrived on scene.

“Before the ambulance came, people were trying to resuscitate the two girls. It was chaos though,” she said.

“I was trying to help this one woman, calm her down. Apparently her daughter texted her saying she was hiding in the bathroom in one of the restaurants and the mother was just chaotic trying to find where her daughter was and if she was safe. And she was safe.”

Jody Steinhauer said she was out celebrating a birthday on the Danforth at the time of the shooting.

“The restaurant was all open, because the doors were open, and it just sounded like really, really loud fireworks except it was much louder and more pronounced. And then immediately, within seconds, somebody yelled ‘get down,'” she explained.

“We just got all of the kids and everybody to the back of the restaurant, under tables. Everything just happened so fast it was frightening.”

Steinhauer said her boyfriend rushed out onto the sidewalk to help one of the victims.

Steinhauer said they tried to call 911, but they couldn’t get through and so used Twitter to get help.

“She was screaming and then we tried to call 911 but the circuits were down so we got on Twitter and reached out to (the media) to let everybody know what was going on and that we needed help immediately.”

Police are asking anyone who may have witnessed the shootings or may have video or information about the shooting to contact them.

“We’re looking for anyone that saw anything, and this is critical, because what happens is a lot of times people will tend to vet out their information, when in fact it can be extremely important to our investigation,” Saunders said.

“It is very crucial for us to put all of these pieces together to figure out exactly what happened.”

t also appears police conducted a detonation but it is not clear for what reason or when it happened.

On Monday, Mary Fragedakis, who is the councillor for Toronto-Danforth, said the detonation was for a suspicious package.

“At the same time as [the shooting] was unfolding, there was also a suspicious package that was found and it had closed down Chester Station, and [police] had to detonate that,” she said.

The shooting comes on the same weekend Toronto police deployed dozens of additional officers to deal with a recent spike in gun violence in the city. But Saunders said the situation would have been much worse if police did not response as fast as they did.

“We had lots of [police] resources that were able to respond to it. I don’t have any issues to the response. I’m grateful that the officers that did respond — the first ones on scene — are not in harm’s way. They were put in harm’s way. This could have been a different story,” he said.

“But at the same token, I have victims … it certainly is not a day that I’m happy. I know that it could have been worse. I’m glad that the officers responded and I believe that with their quick response, [they] were able to resolve the situation much quicker.”

Nova Scotia to collect information those who arrive from outside Atlantic bubble
Jul 6, 2020 3:55 PM
Comments
We welcome your feedback and encourage you to share your thoughts. We ask that you be respectful of others and their points of view, refrain from personal attacks and stay on topic. To learn about our commenting policies and how we moderate, please read our Community Guidelines.