Logan Schatz died along with head coach Darcy Haugan when the junior hockey team's bus collided with a truck
Apr 7, 2018 7:32 AM By: Canadian Press 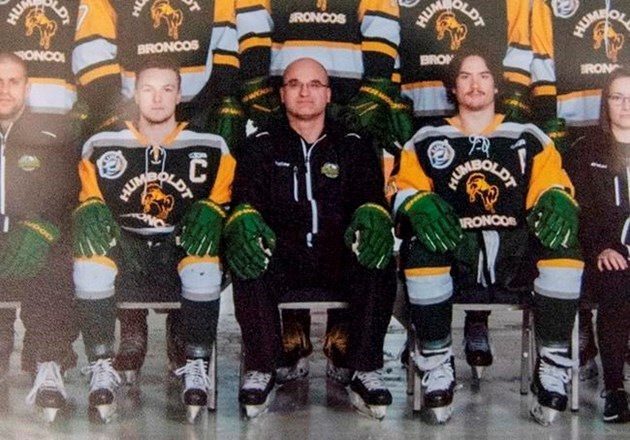 NIPAWIN, Sask. — The captain of the Humboldt Broncos hockey team is among 14 dead following a horrific bus crash in Saskatchewan.

Logan Schatz died along with head coach Darcy Haugan when the junior hockey team's bus collided with a truck on the way to a playoff game in northeastern Saskatchewan Friday.

Kelly Schatz, Logan's father, says his 20-year-old son played for the Broncos for just over four years and had served as team captain for the past two-and-a-half years.

He says the family is seeking solace in one another.

"It's hard," Kelly Schatz said. "I've got four other kids and they're here, which is nice."

Haugan's wife, Christina George-Haugan, confirmed his death to The Canadian Press. Tributes poured in online for father of two who was described as an amazing mentor to young players.

"He will always be a great man in our hearts," his sister posted on Twitter under the name Debbie Jayne. "The tears just keep coming."

The team was on its way to play in Game 5 of a semi-final playoff game against the Nipawin Hawks.

Darren Opp, president of the Hawks, said a semi T-boned the players' bus.

On Saturday morning, Nipawin was quiet. A church which had been a place for families to gather while they awaited news of their loved ones was deserted, as was Centennial Arena, home of the Hawks.

Meanwhile, offers of help are pouring in for families of team members.

The mother of former NHLer Colby Armstrong tweeted that families could contact her if they needed a place to stay in Saskatoon.

Hockey teams and players from leagues across North America tweeted messages of support, many with the hashtag #prayersforhumboldt.

"I cannot imagine what these parents are going through, and my heart goes out to everyone affected by this terrible tragedy, in the Humboldt community and beyond," Prime Minister Justin Trudeau wrote on Twitter late Friday.

Hundreds of people gathered Friday night at the Apostolic Church in Nipawin, waiting for information.

Broncos president Kevin Garinger says the Saskatchewan Junior Hockey League team includes players from Edmonton, Slave Lake and Airdrie in Alberta and from Saskatchewan and Manitoba. Garinger said the Broncos are a close-knit team from the small city of about 6,000 people 110 kilometres east of Saskatoon.

DiCaprio stars in Spielberg classic and a classic 80s flick: This week’s best and biggest on Netflix
Jul 3, 2020 4:44 PM
Comments
We welcome your feedback and encourage you to share your thoughts. We ask that you be respectful of others and their points of view, refrain from personal attacks and stay on topic. To learn about our commenting policies and how we moderate, please read our Community Guidelines.